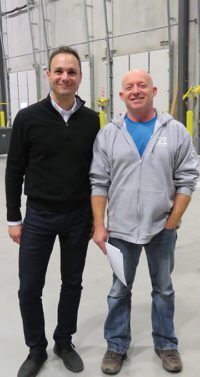 Like the sleek golf and sports clothes it purveys, Cutter & Buck Canada is running a streamlined operation at its new DC in Brampton, Ontario.

The Seattle-based company decided to open a Canadian distribution operation to overcome challenges of lead times, duties and freight costs for product coming from the U.S. With hundreds of distributors in a 100-kilometre radius, the Brampton location – in Canada’s busiest logistics hub – was chosen to allow for same-day deliveries to this huge group of customers.

The facility opened in October 2017, utilizing 42,000 square feet of a 75,000 square-foot space. Running the show is Mark Alexander, the company’s Canadian operations manager. A highly experienced sales guy in the apparel business, he was recruited to Cutter & Buck in May of 2017 to take on the operations job. “When I walked in here it was still dirt floors,” he said.

Going from dirt to operational by October 2017, the project moved very quickly, overseen by Alexander and a team of consultants and installers. Kelmic Consulting out of British Columbia did the design; 3D Storage Solutions Limited handled the racking installations; Leavitt Machinery – Toromont supplied the material handling equipment; and Manhattan Associates put in the WMS.

In order to maximize the footprint, Cutter & Buck opted to install a very narrow aisle system and using two battery-powered Jungheinrich turret trucks (a third is on the way). The racking is 30-foot-high flow rack from Unex Manufacturing. The whole system, designed by Kelmic Consulting, is the second such installation in Canada. “This system is based on ﬁtting the equivalent of 150,000 square feet of standard warehousing in 75,000 square feet,” Alexander said. 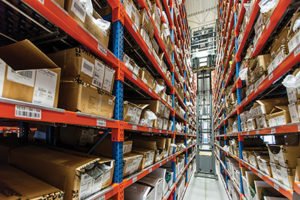 Right now, the facility is growing again. During our tour, a team was installing more racking in the second, 33,000-square-foot section of the building. Although expansion was initially slated for 2020, Alexander said, the company decided to accelerate development to accommodate more, and different inventory.

The company handles several brands, including Clique, which is lower-priced sweats. As a commodity-type product these take up lots of space because they keep thousands of units on hand with multiple SKUs for different colours, and sizes.

Right now the DC handles 9,000 active SKUs and 16,000 in total. About 30,000 sq. ft. of the flow rack will be reserve stock and the new section will hold active stock once the expansion is complete.

“With the new racking, we’re pretty much doubling our platform. Capacity in our ﬁrst section, was around 1.6 million units, with everything ﬁlled right up,” Alexander said. “But that doesn’t happen with our SKUs. If you’ve got ﬁve XXXLs in a box, they take one location. So the capacity that we’ve grown out of is about 1.1 million units. We should be around 2.5 million units of product when we’re all said and done.”

“We do a staggered start because the last UPS pick-up is late,” Renton said. He gets there early himself, in case there is a special order for pick-up, then his ﬁrst order picker arrives at 8:30am, a second person starts at 9:30, and then everybody else starts at 10:30. Once the new section is complete, staff will be working on a single shift starting at 10:30am.

With such a tight group, worker retention and recruitment have been a challenge, Alexander noted. Prospective employees have been carefully screened to ensure they’re ok with the commute, can handle heights and are willing to be cross-trained.

“When you run on a staff of six and two people don’t show up, your labour force is down 33 per cent,” Alexander said. “That can be exhausting for guys like me and Mike. I’m not very good at packing boxes, but we’ll do it if we have to. That’s the mentality that you have to absolutely have when you’re running as a team of so few, like we are.”

Alexander doesn’t expect to add any staff once the expansion is complete, either. “We can do triple the volume with the same staff,” he said. “In a standard warehouse setting with standard picking procedures, my staff would probably be about four times the size.” 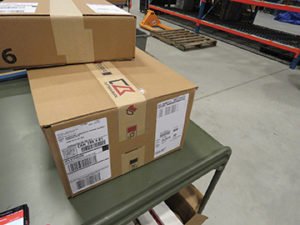 Pick tickets on the outside of the shipping box help customers who order large volumes of apparel for events know what’s inside.

Cutter & Buck works to the slogan “delightfully serve our customers”. For the Brampton DC that means every order received before 5pm will be shipped the same day; it means same-day service for customers in the Greater Toronto Area; and it means the DC staff will make every effort to ensure orders get ﬁlled in a timely manner.

Staff pick 1,200 items each day, ﬁlling an average of 80 orders. The orders come in via fax, PDF and email, as well as through the corporate system. Everything’s entered into the SAP system and then drops into the Manhattan Associates WMS.

Orders are waved every half hour, generating pick tickets. Cycle counts are done daily, which Alexander said helps keep track of manufacturer errors, and allows them to maintain a 99 per cent pick accuracy rate.

The WMS directs pickers on the most efﬁcient routes for the batch they are picking and when orders get to the shipping area, the pick tickets also provide the carton size needed to streamline the packer’s job, based on the dimensional information in the WMS.

The pick ticket is also applied to the outside of the shipping carton, which Alexander noted is a huge help to the customer. “When we’re sending thousands of units, a lot of times it’s for events. So to know the contents of the box – without having to open it – is a big advantage.”

Another detail designed to impress customers is the way boxes are sealed. Instead of spending on imprinted corrugated, plain boxes are neatly sealed with logoed paper tape. “And we tell our guys that it takes just the same amount of time to put labels on straight as it does to put ‘em on crooked,” Alexander chuckled.

The WMS manages replenishment as well. The DC receives ﬁve or six containers of 800 cartons each per clothing season. Deliveries are seasonal, with a container arriving every other day in the late summer, for example.

Ironing out the wrinkles 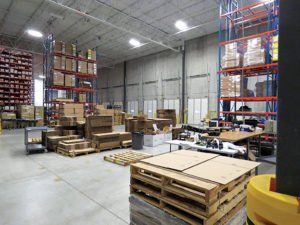 Part of the next phase will include a customer lounge in this area near the docks.

One of the operational challenges the team addresses is ‘will-call’ business, which is common with so many customers in a close radius to the DC.

“Very rarely somebody walks in to pick up an order, and we don’t have it ready. So, my staff is fantastic,” Alexander said. “And while we don’t like deviating around the system, we’ll ﬁnd the locations manually and we’ll go pick it because the last thing we want is somebody to be walking out of here without product.”

Part of the expansion project includes building a customer lounge near the docks, so that when customers do arrive they’ll be comfortable and at the same time will have a front row seat on the operation. Alexander said many customers have never seen a VNA operation and are awed by the height of the racking.

As with any fulfillment operation, there are numerous details that need attention and the team is working through them. The picking carts, for example, were constructed so that there wasn’t enough room for the operator to move around them when they are connected to the turret trucks. That’s being addressed.

Likewise, the trucks came equipped with black tires instead of the non-marking ones requested. It’s part of the customer service ethos that the facility be spotless, and this is the kind of detail that Alexander notices.

Cutter & Buck is doing well. Following on a record-breaking last quarter of 2018, the company has been dealing with growing volumes in all three of its DCs – Seattle, Kentucky and Brampton.

With the Brampton expansion having come two years ahead of schedule, the company is possibly looking for another Canadian location, this time in the West. Because some Canadian orders are still being fulﬁlled by the U.S. locations, Alexander said another DC will alleviate pressure on the Seattle DC as well as meeting the same goals – cutting duties and shipping costs – as the Brampton DC.

Meanwhile, he is looking forward to the completion of the current expansion project. “It’s been a lot of long nights; a lot of weekends. A lot of containers being unloaded by yours truly, the former sales guy,” he said. “But to be a part of something like that, it makes it just absolutely worth it.”