Living up to its name

Diversco chooses automation to keep up with diversification 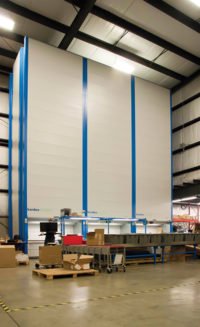 The shuttles store 4,500 SKUs that used to require 5,000 square feet of racking.

Diversco is a Canadian success story. Founded in 1986, as Sherwood Gas Controls, the company, based in Cambridge, Ontario, quickly became a leading equipment wholesaler in the gas industry; specializing in equipment and supplies for propane, natural gas and compressed air. To position themselves for growth, they sought to expand into additional business segments. Their deep roots in the scuba diving and propane industry have evolved into watersports equipment and supplies. The company also boasts a transportation division and a packaging supplier.

At 52,000 square feet, the Cambridge warehouse is the largest of six the company operates across Canada. It stores and distributes parts and supplies for all business segments: propane and gas, compressed air, scuba and watersports. Managing a combination of smaller parts (valves, regulators, hoses, snorkels, fins, etc.) and large parts (kayaks, paddle boards, etc.) added another layer of complexity to the fulfilment process.

As the company was growing it was getting a little chaotic in the warehouse, says James Huddle, Diversco’s purchasing and operations manager. The facility was operating partly as a showroom, which meant that customers were going into the shelving to look for a part and would frequently put things back in the wrong place. As well, with larger items like kayaks taking up a bigger footprint, the warehouse was quickly running out of space.

While they considered expanding the building, ultimately the company decided to look up, and take advantage of the existing building’s high ceilings by using existing, available technology. “With a 40-foot ceiling, adding more rack didn’t make sense,” Huddle says, “it was more economical to go up than out.”

“It was a complete transformation from a manual picking environment of walking and searching to a semi-automated process,” said Huddle. “The compact storage, time savings and ease of use completely offset the cost of the system. Plus, the added security of having one operator on the shuttle means fewer inventory errors.”

Installation of the towers was incredibly easy, Huddle says, taking only four days. Because the building has 40-foot clear ceilings, the shuttle height was no problem. Although the building’s slab was up to spec, with a 1,000-pound capacity per tray, the engineers did decide to bulk up the base plates on the corners of each unit to spread the weight around.

Small parts inventory was previously stored on 5,000 square feet of shelving. Using handheld RF scanning technology workers would walk through the shelving scanning and picking parts as directed by the RF gun, each worker often walking multiple kilometres per day. Now, these parts are inventoried in three VLMs that occupy just under 360 square feet – a 92-percent floor space savings.

While labour requirements have remained the same, efficiencies have skyrocketed. With five full-time workers (one worker in the small parts VLM area, two workers in the large item rack area and two workers in shipping), Diversco is filling orders faster than ever.

Huddle says it previously took one picker about 20 to 30 minutes to fill a 10-line order. Now productivity has increased from 25 lines per hour to 115 lines per hour (including a new bag and tag step) resulting in a 460-percent increase in productivity. Shipment accuracy climbed by 98 percent, while order fulfillment times improved by 80 percent.

Now, the web-based ERP (from Mississauga, Ontario-based Modular Software) sends small-part VLM zone orders to the inventory management software for fulfillment. The operator selects up to eight orders from the order list in PPG for fulfillment. A tote is assigned an order ID and a customer ID and is placed in an open position on the batch station. When ready, the operator starts the fulfillment process with the click of a button and the VLMs move to retrieve the parts required for the selected orders. 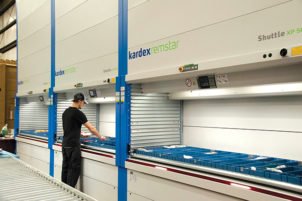 As the picker selects items from one tray, the others move into position so there is no waiting.

Using pick-to-light technology, the transaction information centre (TIC) located on the front of the unit, in combination with a laser pointer located inside the work station, direct the operator to the exact location within the tray to pick from. The TIC displays the part number and location to pick, while the laser pointer uses a light beam to highlight the location of the item required. The operator picks the correct quantity of the item, confirms the pick and turns to the batch station to distribute the items among the orders as directed by the put lights on the batch station.

While the operator is picking this item from the VLM and putting it into the individual orders on the batch station, the other VLMs are retrieving additional inventory required for the same batch. Because the VLMs are always working one step ahead of the operator there is rarely any time wasted waiting for parts to be presented for picking.

The operator works round-robin, picking from the VLMs and putting into the orders until all parts for the order are filled. When an order is complete, the operator pushes the tote onto a takeaway conveyor as directed by the put batch lights. The order is then moved to the large-item fulfillment rack area for additional inventory or routed directly to shipping.

When an order arrives at the large-item inventory rack zone for further fulfilment, the worker there scans the order ID with a handheld RF device and is directed through the zone to gather the parts required. Once these additional parts are added and the order is complete it is then routed to shipping where the order is repacked and shipped via common carrier.

Diversco also receives a small number of walk-in orders that they need to accommodate within the picking process. To handle this, they use the hot-pick module within the PPG software. This allows the operator to suspend the batch picking order they are working on to pick a hot order, usually for a waiting customer.

“Even though walk-ins represent only about five percent of our orders, it was critical to our customer commitment that we had a way to fill these orders quickly and efficiently,” Huddle says.

All items are received into the ERP system to one temporary bin location. If the parts are for the VLM zone, PPG creates a put order. These orders are normally put away in the morning. A put order works just the opposite of a pick order. The operator scans the order ID and the VLMs move to provide the operator a location to store the items. The operator is directed using the TIC and laser pointer to the exact location to store the items.

For increased inventory control and accuracy, discrepancy reports are run automatically every day. Any inventory variances found between the ERP and PPG are physically counted and adjusted, preventing the need for a full physical inventory or cycle counting activities.

When the plans for the shuttles were first introduced, Huddle says there was a bit of apprehension from staff, as there would be with any change. But once the warehouse staff saw the machines and how they work, they were impressed and now they appreciate how much more efficiently they operate.

With product constantly changing the warehouse staff decide, based on the dimensions of new items, and the frequency of picking, whether they should be stored in the VLMs and the bins information is updated accordingly. Preventive maintenance is managed by dealer Johnston Equipment on a schedule recommended by Kardex Remstar.

Two years into the operations, and with an ROI planed for three years, Huddle is extremely happy with the ease of operating the shuttles. “With the speed of the machines we are doing what we did before in a fraction of the time,” he says.

“We put the product in and pull it out. Beyond that we don’t have to do much.”