A lot of moving parts 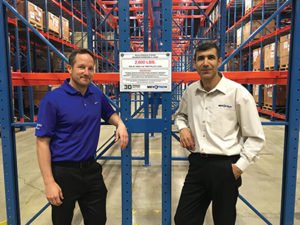 (L-R) Neil Dixon of 3D Storage Solutions and Eduard Yonathan of Mevotech in the new facility.

Fast growth cannot really be classified as a problem for a business, but it does pose challenges for the operations managers trying to keep up.

“We were being increasingly challenged by aggressive growth and SKU proliferation, which was driving increased inventory,” Yonathan says.
This inventory quickly spread among seven warehouses – five in the Greater Toronto Area, one in Belleville, Ontario and one in Brantford, Ontario – in an attempt to temporarily manage the situation. This dispersal of inventory was leading to inefficiency, with more touches, the need for more material handling equipment and increased transportation costs as product was moved between locations. The situation was made more complex by the increasing need to shorten the delivery lead time for customers.

In the timeframe that it was growing so quickly Mevotech had already started looking for solutions to these challenges. An intensive two-year search finally yielded a site in Mississauga, near Pearson Airport. The two-building campus includes what are now a finished-goods facility of 180,000 square feet and a raw materials facility of 307,000 sq ft. They house the company’s storage and fulfillment operations and as well as offices and employee facilities. 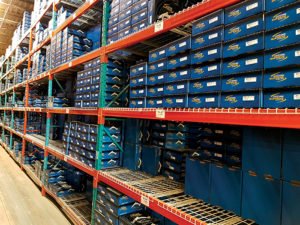 Mevotech’s finished-goods storage, as seen in one of its soon-to-be decommissioned distribution centres. (Mevotech photo)

Yonathan says that a two-building set-up was not necessarily what they sought; but when it became available they knew it would work.
The company engaged a material handling consulting firm to do a complete analysis of their business processes. That assessment was then analyzed by an internal task force comprising key members of all the company’s departments. It took six months and a dozen iterations before they decided on a workable solution.
Mevotech’s product flow has inbound raw materials arriving in one building for storage, then when needed they are moved to the finished goods building, processed – packaged and kitted – and stored, ready for shipping to customers. To accommodate a growing number of SKUs (Mevotech engineers have a target of 100 new items each month) they decided to create density by using a very narrow aisle (VNA) configuration along with deep flow racks and pushback racking.

Once they had a plan it was time to find the right supplier to build the storage to their specifications. That’s where Neil Dixon, a sales executive with 3D Storage Solutions came into the picture. Dixon and 3D had a long relationship with Mevotech; the two companies had worked on projects together for 10 years. But Mevotech didn’t just rely on history in making its decision to select 3D.

“We had a relationship, but they put us to the test,” Dixon recounts. “They made us sweat for sure.”

3D won the contract over four other potential suppliers thanks to the quality they offered, along with their proven project management skills. It wasn’t a matter of pricing, Yonathan says, as the quotes were not that far apart. “Timing was crucial,” he says. And the fact that 3D was a proven partner helped.

Key to this project was the ability to accommodate Mevotech’s plan to move into the new facility as it was being built. The contract was signed on December 22th, 2016, and the installation began on February 6, 2017. Between February 6 and May 15 – the go-live date – 3D installed an average of 4,450 pallet positions per week for a total of 58,000 positions.

That’s quick by the standards of a regular installation, but 3D and Mevotech upped the game by having raw materials diverting into the new racking as it was completed. As they were decommissioning their old facilities, Mevotech “cherry-picked” items from the different facilities that made sense, and diverted those truckloads to the new building. 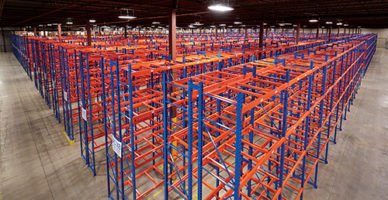 Racking in the raw materials facility, with very-narrow aisle configurations, ready for new product to arrive.

This meant that the 3D installation teams had to do things a little differently to ensure that the rack was ready when the loads arrived. The challenge was “making sure everything was delivered on time, making sure the installers got it installed on time because they needed to bring product from elsewhere so it wasn’t as though we could just build everything and then they would load it after, and we could pick where we wanted to build,” Dixon explained.

“We had to be very precise as to what rack components were being delivered, on each truck and that the installers were going to be able to keep up to it. They had to build and certify the rack right away and this meant completing specified areas down to the end-of-aisle guards,” he added.
Ideally, the installers would wait until the job was complete to add the end-of-aisle protection, and then one inspection would take place.

“The level of difficulty was much more than your average install,” he said.

“During this install we are in contact almost daily as far as where we’re at, when they want to load the rack, what the forecast is. So we were constantly in contact, to ensure we were always on the same page,” Dixon noted.

And apparently the formula has worked. The interview and tour for this article took place on May 11, a day or two before the go-live. There were a few installers finishing up details, a crew from Johnston Equipment was there setting up the material handling equipment, and product was beginning to fill the shelves in both the raw materials and finished goods buildings.

But the real sign that this was a successful project was Yonathan and Dixon being able to take the time for a relaxed and chatty tour the day before the deadline. “Now that we’re at this point, I’m more relaxed,” Dixon said.

How it all fits

Once fully operational, Mevotech will be receiving about seven 40-foot shipping containers a day, each with 40 pallets, into the raw materials building. Using an ‘ABC’ system that classifies each item based on its speed of sales, raw materials are stored in the various styles of racking until they are needed for production. About 14,000 SKUs will be held in the raw materials facility, 4,000 of which are destined for a small parts aisle, made necessary by Mevotech ‘s philosophy of keeping hard-to-find parts in stock that are slow-movers and destined for older or rare cars.

Parts are moved by the pallet-load using a single shunt truck and 53-foot trailer about 100 metres across the parking lot to the finished goods facility. There they are unloaded, processed and stored again according to the ABC system, this time by zone, brand, box size and item. Product is packed to a specific shelf – items do not move from one location to another.

Picking from the 80,000 SKUs of finished goods is done person-to-goods, using Raymond man-up turret trucks, on an individual order basis. The longest it will take an order to be processed is 72 hours, but many clients receive their orders in just a few hours’ time. The company boasts an award-wining 95 percent fill rate, thanks to its inventory forecasting system.

Yonathan says the storage and order fulfillment system works thanks to creative use of space: “The mixture of rack types provides allows for optimization, using the ABC classifications to create a more efficient layout, thus reducing touch points and travel time. Diving product into zones, along with the implementation of a pick face and replenishment process has also reduced the raw material lead time into production.”