Rebooting after the pandemic

As supply chain operators contemplate their post-pandemic future, many are seeing uncertainty as the new normal. This is changing how they view automation. 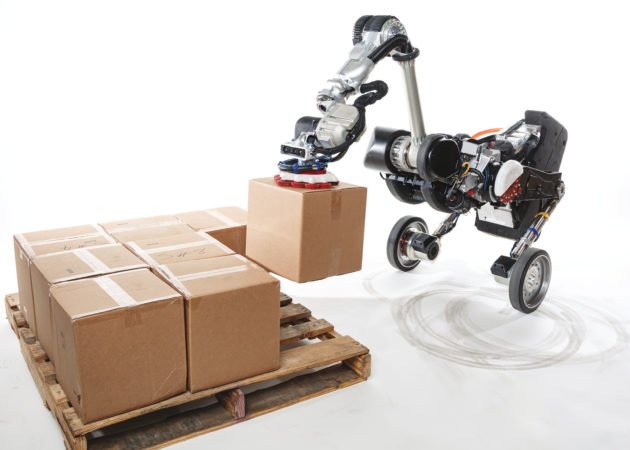 Boston Dynamics has developed a depalletizing robot, known as Handle.

One of the most sobering realities about the COVID-19 pandemic is that according to scientists, it will not be the last. In the World Health Organization’s (WHO’s) final media briefing of 2020, Dr. Michael Ryan, head of WHO’s Emergencies Programme, warned that “we need to get ready for something that may even be more severe in the future.”

At the beginning of 2020, supply chain operators were already struggling to adapt to labour shortages, the growth of e-commerce, and the trend to mass customization. While the pandemic added to their concerns, its full impact wasn’t initially clear.

“I would say that in the first few months of the pandemic, there was a little bit of deer in the headlights, where people weren’t sure exactly how long this was going to last,” says Jeff Christensen, vice-president of product for Pittsburgh-based Seegrid. “And then, as it was clear that it was going to extend out, people started to understand that ‘we need to deal with this.’”

Enjoying this feature? Read more from our February 2021 print edition.

Seegrid and other technology vendors expect demand to pick up in 2021. “People are, I think, accelerating some plans that maybe they were thinking about automating two or three years out,” says Christensen. “Now, it’s ‘let’s pull them forward, and do them sooner instead of later.’”

Most of the activity is being undertaken by larger companies that already had automation agendas and have been able to increase their market share during the pandemic. “The big box stores are still open for shopping everywhere, and they’re doing a really great business within their distribution centres,” says Warren Shiau, vice-president of research for IDC Canada. “So even though the Canadian distribution centres are still, for the most part, manual, the Costcos and the Amazons are trying to implement as much automation as possible.”

Amazon is a case in point. While that company opened a robotics R&D facility in 2020, it also hired 400,000 people in fulfillment roles to meet an enormous increase in demand. 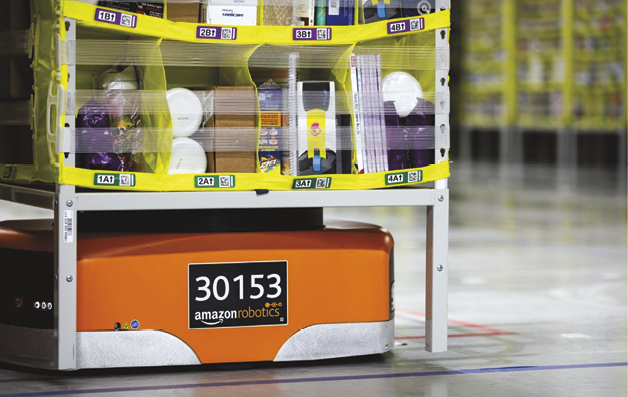 Even Amazon, which owns its own robotics company, says automated fulfillment centres are a decade away.

The revelation that the labour shortage will be with us for some time makes the business case for labour-saving automation look like a no-brainer. However, while end-to-end automation has succeeded in some environments, e.g. in the food industry, automating warehouses and DCs is more difficult than it appears on the surface.

“The issue in the warehouse setting is that a lot of automation was born out of the manufacturing industry,” says Brian Nachtigall, logistics product and business development for Boston-based robotics supplier Boston Dynamics. “And in manufacturing, a lot of automation and robotics is built around very repetitive tasks where you have prior knowledge of the material that you’re handling or the job you’re doing.”

Warehouse and DC environments, by contrast, have far more variability, he notes, and many efforts to introduce automation to these environments have failed in the past.

Even Amazon, which owns a robotics company, doesn’t have easy answers to this problem. According to a May 2019, Reuters release, Scott Anderson, Amazon’s director of robotics fulfillment, surprised many pundits when he announced that the fully automated fulfillment centre was at least a decade away. “In the current form, the technology is very limited,” he said. “The technology is very far from the fully automated workstation that we would need.”

As the e-commerce trend continues to force operators to adapt from handling pallet loads to picking single items, many older automation systems have become obsolete. “The challenge with some older automated facilities is the inability to adapt to rapid change in order profiles,” says Saif Sabti, vice-president and managing director of SSI Schaefer Canada, a provider of warehouse solutions.

Technology for the new reality 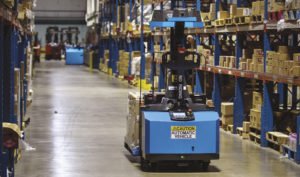 Seegrid’s vision-guided AGVs are used in some of the biggest DCs in the world.

The outset of all this is that the automation of warehouses and DCs will depend, to a large degree, on emerging as opposed to established technology. Recent developments, however, look promising. In a February 2020 press release, the International Federation of Robotics (IFR) presented a two-year vision for the robotics industry that emphasized robots are becoming smarter and more collaborative, both of which will be key to their adaptability to logistics environments.

Boston Dynamics, for example, has developed a vision processing solution that enables robots to work with mixed-SKU pallets. “What we enable is depalletizing – picking cartons off of a pallet with no prior information about the cartons that are on that pallet,” says Nachtigall. The software uses artificial intelligence and high-resolution 3D and 2D sensing to handle nuances such as varying box sizes and slip sheets that are placed between the layers on a pallet. The system is able to pick up to 720 boxes per hour.

Many supply chain operators hope that that autonomous mobile robots (AMRs) will eventually replace human beings in picking, transporting, and placing anything from a heavy box to a small envelope. Compared with other fixed methods of automation, AMRs are scalable – they could be added in the holiday season, for example – and they can also be integrated into workflows in areas where humans provide the least value.

According to Shaver, warehouse workers spend 70 percent of their time in transit. “This is effectively unproductive time,” he says. “You’re not picking, you’re not packing, you’re literally walking from one point to another.”

Dematic, SSI Schaefer, and Seegrid are all major AMR providers for the logistics sector. Boston Dynamics is also developing a line of AMR products.

Another determining factor will be the ability to deploy automation on much shorter time frames. As Shaver points out, companies can no longer make their technology plans based on a five- to seven-year horizon. “I think that way of building supply chain strategies is going to be out the window because of the unknowns going forward,” he says.

This is putting huge pressures on implementation time. Two factors will be key – ease of integration, aided by operating systems that accommodate devices from multiple vendors, and user interfaces that allow robots to be programmed directly by end users.

Denmark-based OnRobot, for example, has recently released software to allow its gripper technology to communicate with multiple devices. “All these tools are software controlled from the robot, and that has revolutionized the application integration process,” says Kristian Hulgard, general manager, Americas, for the Odense, Denmark-based manufacturer.

The software, Hulgard notes, provides a user-friendly interface that makes it possible for end-users to program the robot. “Deployment time has just been reduced dramatically,” says Hulgard, “and I think that’s where the biggest technology leap has shown itself.”

As organizations move forward, the adoption scenario will be markedly different from what we saw leading up to February 2020. “If the pandemic has taught us anything, it is that we could not have predicted this even this time last year,” says Christensen. “And so that level of unpredictability will happen again. So design for change, find things that will address your cost efficiency metrics, but also can change as your business demands change.”