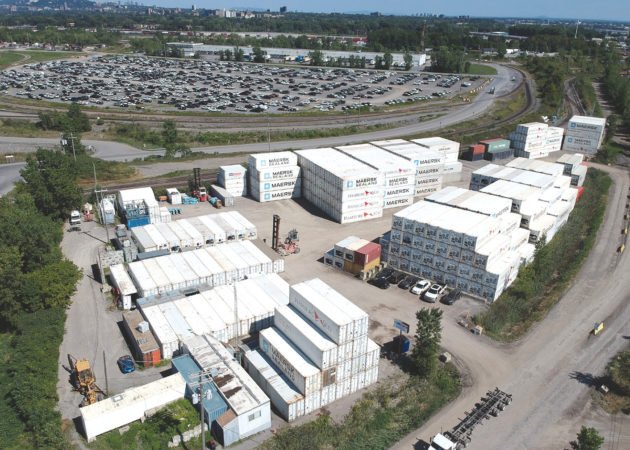 Hunt’s Taschereau location is adjacent to the CN rail yard.

When it comes to the shipment of premium cargo in refrigerated containers, Yanik Espey says speed is everything.

“A reefer containing fresh fruit or pharmaceuticals or even Christmas trees can’t stop for long,” says Espey, vice-president of Hunt Refrigeration, based in Montreal. “When problems occur – and they always do – you have to resolve them quickly to get cargo moving. That’s what Hunt’s all about.”

It’s a lesson Espey learned as a teenager when he began working alongside his father Alan, an Irish immigrant who founded the business near the Port of Montreal in 1985.

It has since grown from a one-shop, single-service business into a national company with 150 employees and three divisions that provide cleaning, maintenance, repair, rental and storage services for reefer containers and generators. Their customers are shipping lines and major rail and trucking companies at six terminals across Canada. 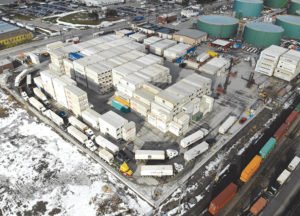 Most containers that arrive at Hunt yards are stacked two high and cleaned using mobile
platforms that allow workers to work on five containers simultaneously.

The newest terminal came on line January 1, 2020, in Halifax, following Hunt’s acquisition of local container company P.A. Yeoman Marine. The company’s owner, Peter Alfred Yeoman, died in September 2019. He started the business more than 30 years ago in a facility in Montreal that it shared with Hunt.

Most of that work is done at the company’s three main container terminals: two in Montreal and one in Toronto. The yards handle hundreds of empty containers every day, most of them owned and operated by the world’s biggest shipping lines – Maersk, Hapag Lloyd, MSC and CMA CGM among them – as well as railroads CN and CP.

Most containers that arrive at Hunt yards are stacked two high and cleaned using mobile platforms that allow workers to work on five containers simultaneously.

“Property is expensive so you have to make the best use of land that you can,” said Espey. He credits the mobile platforms, which were designed and built in Hunt’s metal shop at company headquarters on rue Notre-Dame, a stone’s throw from the main entrance to the Port of Montreal, for helping to keep workers safe and maximizing productivity.

In addition to cleaning, Hunt employees do maintenance checks and pre-trip inspections to ensure the structural integrity of containers and to make sure generators are working properly.

“Things break and we know where problems are likely to occur,” said Espey, a certified diesel mechanic.

Though manual inspections are still de rigueur, Espey says much of the work is now done electronically because containers and generators are equipped with technologies that allow them to be both located and diagnosed.

“Computers help us to measure and monitor everything we do,” said Espey. “Containers are tagged and have GPS. We know when they are in and out. Service calls are now done on tablets. We’re in the process of going paperless.”

When problems are detected on containers or generators either in its yards or dockside, Hunt sends out teams of highly trained technicians who can quickly repair most problems they meet.

Eight teams of diesel techs handle generator services ranging from clip-on generators for road transport and under-
mount gensets that connect to truck chassis to multi-plug power packs that Hunt fixes, sells or rents from the company’s inventory of 150 generators. 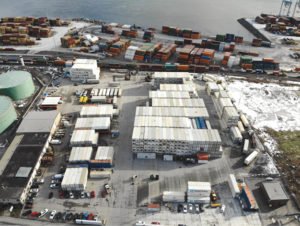 Hunt Refrigeration’s principal location in the
Port of Montreal handles hundreds of intermodal containers a day.

According to Espey, the most pressing repair jobs involve loaded cold-chain containers that arrive in port with generator problems. At the Port of Montreal alone between 500 and 2,000 reefers carrying everything from imported foods, beverages and pharmaceuticals to exported trees, worms and pork at controlled temperatures of between minus 30 and plus 30 Celsius are handled daily.

“With that many containers, a few are going to have problems,” said Espey. “When they do, the only goal is to get things working and save the load. Speed is the key.”

As a dealer and distributor for Carrier, Thermo-King, Starcool and major refrigeration companies, Espey says Hunt takes pride in – and is renowned for – the vast quantity and selection of spare parts it has on hand.

“We know what parts are likely to break down, how to change them and how long it’s going to take,” said Espey. “It’s a question of knowledge and experience and it’s why all the big shipping lines are our customers. Even truck-trailer people and local companies outside the ports who use climate-controlled containers call us. We are the reefer specialists in Canada.”

He added that hard-to-get parts or one-off solutions needed to fix a generator or one of the many kinds of structural damages that metal containers can incur while being moved constantly across land and sea are made in Hunt’s metal shop.

“In our business, if we can’t buy it we have to make it,” said Espey. Custom-made equipment include coiling machines and washing containers needed to clean and prep containers between trips.

In addition to the mobile washers, the shop also builds designs that the Espeys and others come up with to overcome operational challenges.

Notable is the Verified Gross Weight (VGW) scale. Designed by Yanik Espey and comprising a frame, lift, software and balance, he said “we slapped [it] together in the workshop.” It is installed in a bay at the entrance to the Port of Montreal and weighs every container – both dry box and reefer – that enters or leaves the port by truck.

“If you weigh just the truck you have a lot of variables like snow and fuel,” said Espey, who came up with the idea for the scale, which briefly lifts containers off trucks to get an accurate VGW, as a way to help counter growing security concerns over the contents of containers. “The LTL guys really like it because they had a harder time getting weights.”

The shop also builds refrigerated container units for use at cultural events in Montreal, including a multimedia show in the Port of Montreal put on by Cirque du Soleil founder Guy Laliberté, and by businesses in need of added refrigerated space.

In many ways, the fortunes of Hunt Refrigeration have grown in lockstep with the phenomenal rise in reefer traffic both around the world in general and in the Port of Montreal specifically.

When the now semi-retired Alan Espey arrived in Canada and opened the business as an overseas venture for John Hunt, owner of Hunt Refrigeration in the United Kingdom, world container throughput was less than 50 million TEUs.

But the advent of free trade, bigger ships and complex global supply chains has helped world container traffic grow by an average of nearly 10 percent a year to more than 800 million TEUs in 2019. At the same time, the mass movement of retail goods has led to containerization of niche markets, notably commodities and temperature-sensitive cargo – or cold chain.

The Port of Montreal has emerged as a major transhipment hub and container port that services Central Canada and the American Northeast and Midwest. In 2000, the port handled more than a million TEUs for the first time in its 190-year history.

In 2005, Hunt opened its Toronto yard, where it cleans and repairs reefers and stores dry containers for shipping lines. Hunt’s cross-Canada expansion continued with the opening of a yard in Calgary, in 2015 and another in Prince Rupert, British Columbia in 2017.

He added that the future looks bright for the container business in Montreal, where the port plans to more than double its container capacity if and when the proposed Contrecoeur Port Terminal – a facility that will be able to handle 1.15 million TEUs annually—goes into operation as planned in 2023.

“This is a great business to be in,” said Espey. “I’m very proud of what we’ve managed to build and accomplish.”