Steady as she goes

In spite of the continuing pandemic, ports across Canada are maintaining focus on long-term infrastructure development 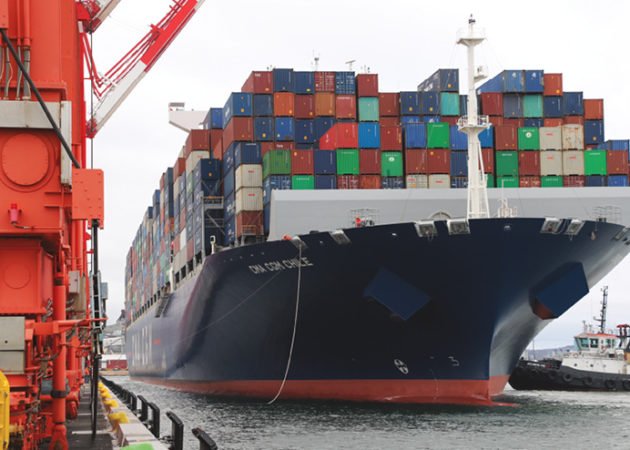 The Port of Halifax is already equipped to handle the biggest containerships on the ocean.

In spite of the continuing pandemic, ports across Canada are maintaining their focus on long-term infrastructure development. As the world economy continues to chafe from last year’s recession, the ongoing resurgence of coronavirus infections and the slower-than-expected rollout of vaccinations, port authorities are pressing ahead with projects that will ensure future prosperity and trade opportunities.

To hear Brian Friesen tell it, terminal capacity and supply chain efficiencies are the keys to intermodal success. That’s why he’s excited by the long-term prospects of three major infrastructure projects that are entering crucial stages of development at British Columbia’s Port of Prince Rupert in 2021.

“We are in the midst of a multi-year effort to create an integrated intermodal ecosystem,” said Friesen, the port authority’s vice-president of trade and communications.

“These are big and interesting investments in a growing and successful port that is well positioned on the Pacific Great Circle Route.”

One project is the expansion – the second in four years – of the Port’s Fairview container terminal. Owned and operated by global supply chain giant DP World, the terminal’s annual throughput capacity was nearly doubled to 1.3 million TEUs in 2017.

Already operating at around 90 percent capacity – helping make Prince Rupert Canada’s third busiest port by container volume and cargo tonnage, behind Montreal and Vancouver – the terminal is being expanded to raise storage to 1.6 million TEUs. Work is already underway and should be completed late this year.

By then the Fairview-Ridley Connector Corridor will be in use. It is a 5.5-km,port-owned road with two additional rail sidings that will reroute truck traffic away from downtown Prince Rupert and shorten the drive to the Fairview terminal by 15 km. The $115-million project is 75 percent complete and will be finished this spring.

“The growth of exports means more and more trucks,” said Friesen. “The new road will help eliminate traffic congestion and take costs out of the supply chain.”

Work on a related, National Trade Corridors Fund-backed project – the 70-acre Ridley Island Export Logistics Platform (RIELP) – will begin this year if, as expected, environmental approval is received. The $100-million project will expand existing road and rail infrastructure to support development of a large-scale bulk transload facility and integrated off-dock container, intermodal yard and warehousing on the swampy island for export transloading.

“This project is of significant scale, designed to handle multiple bulk railcars and provide international market access for Canadian products,” Friesen said about the RIELP site, which is planned for opening in 2023.

“We see this as a real opportunity to fill the many empty boxes that we now load back on ships with plastic pellets, cereal grains, lumber, pulp and mineral concentrate that we can receive, store and then transfer on a just-in-time basis.” 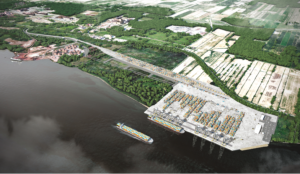 In Montreal the port got a major boost in early January when the Quebec government announced it was providing $55 million in funding to the Contrecoeur container terminal. Final federal approval for the nearly $1-billion project, which will increase the port’s container-handling capacity to 1.15 million TEUs, is also expected imminently. Construction is planned to begin in late 2021 with commissioning scheduled for 2024.

“This is a key year for what is one of the biggest strategic infrastructure projects in our history,” said Melanie Nadeau, the Montreal Port Authority’s director of communications.

According to Nadeau, the Contrecoeur project will enable the port to handle the steady growth in container traffic while solidifying Montreal’s position as the largest port in Eastern Canada and the main point of entry into the market-rich Great Lakes region and the American Midwest.

“We just finished the second phase in December of an expansion of our Viau intermodal container terminal, which now has a capacity of 600,000 TEUs,” said Nadeau. “But it’s already full all the time. We really need the new terminal.”

The port of Montreal will also complete work this year on a public observatory and redevelop truck access and container and cargo storage areas at its century-old Bickerdike terminal.

In Halifax too, the yardsticks are being moved forward in 2021 on two federally funded projects that will streamline container operations at the city’s historic port, the fourth largest by container volume in Canada and the only port in Eastern Canada that can berth and service the giant vessels from southeast Asia that are now plying North Atlantic waters.

One project now in the advanced planning stage – the Marine Container Examination Facility (MCEF) – involves the construction of a dedicated facility and access road in the port for inspection of containers by the Canada Border Services Agency. Currently, containers are shipped back and forth by truck to the CBSA facility in Dartmouth, a trip that requires using city streets and harbour bridges.

“It would result in an obvious saving of time and money,” said the port’s manager of media relations and communications, Lane Farguson. “We need to be efficient and reliable in order to compete with New York City and other Eastern Seaboard ports for big-ship trade.”

Public consultations are expected to begin soon for a rail-based solution to move containers out of the port without using city streets. “Sixty percent of cargo that moves through Halifax goes right on to rail for Ontario and beyond, it never touches the roads in Nova Scotia,” said Farguson. “What we want and need to do is to move more of that cargo by rail.”

The solution, he added, is exploiting an existing rail line through downtown Halifax that was blasted out 100 years ago to help develop the port’s export capacity.

“Making that great rail cut was very prescient,” he said. “We’re now looking at ways to improve efficiencies at the other end of it.”

Projects aimed at expanding, upgrading and improving new and existing infrastructure in an effort to capitalize on future growth are also on the menu in 2021 for Ontario’s Hamilton-Oshawa Port Authority.

“These are very interesting times for us and this year will be an important one,” said Bill Fitzgerald, HOPA’s vice-president of operations. “We’re investing a lot in our facilities, we’re looking for opportunities to buy new lands and we’re making major changes.”

Much of these efforts are centred on and driven by a cargo diversification strategy that began decades ago when steel makers Stelco and Dofasco fell on hard times.

The port bought back land and facilities like Pier 15, and expanded capacity like a new 56,000-square-foot, port-owned warehouse for mostly palletized goods that is leased by trucking giant Fluke Transportation. Similarly, Piers 12 and 14 are being upgraded, with a 40,000-square-foot building going up on Pier 12 for indoor storage of moisture-sensitive commodities.

A new $11-million project that is about to get underway as part of an agreement with Transport Canada involves the configuration of some municipal roads to allow a rail connection to Piers 14 and 15.

Across Lake Ontario in Oshawa, a tender is now open for a dredging project for the entrance channel to the port there to establish seaway draft alongside its docks.

Work is also starting on a land-use plan that will improve road alignment, railway connection and other facility needs to capitalize on Oshawa’s close proximity to Toronto.

“We want to provide opportunities for people to move cargo, faster, safer and better,” said Fitzgerald. “We could see a lot of expansion there.”

Big and getting bigger

Work on some key infrastructure projects under the Greater Vancouver Gateway 2030 strategy are moving ahead this year at Canada’s biggest port. Topping the list is the Centerm Expansion and South Shore Access project, which is to be completed in 2022. It will help meet an expected near-term spike in demand for containers shipped through the port.

Work this year to rearrange on-site operations and to build infrastructure like the new Centennial Road overpass and remove the Heatley Avenue overpass will help to increase the Centerm terminal’s container-
handling capacity by 60 percent while adding only 15 percent to the facility’s footprint.

Work will also proceed this year on another key development project: the federally funded Commissioner Street Road and Rail Realignment Project, which will make room for additional CP rail tracks and support the capacity needed to move goods and streamline operations on the port’s busy south shore.

For his part, Bruce Burrows, president and CEO of the Chamber of Marine Commerce, applauded the forward-looking efforts of port authorities – with federal and provincial support – in preparation for a return to normalcy and an accompanying uptick in global trade in a post-pandemic world.

“2020 was a tough year for ports in Canada and the United States,” said Burrows, whose bi-national group represents more than 130 marine stakeholders that operate in waters all around North America. “But they are continuing to make the investments and do the things they need to in order to capitalize on the opportunities that will arise when business picks up again.”