Taking a load off

How unpacking trailers and containers just got a whole lot easier 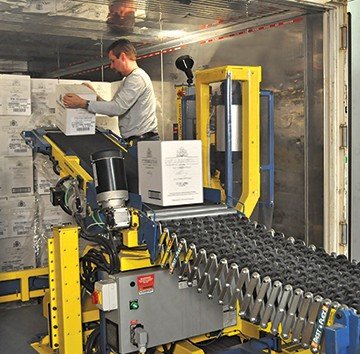 Lifting boxes down from ceiling height in a container is a thing of the past.

Labour saving devices are not always looked upon kindly by the workers whose job they might replace, but in the case of a new machine introduced to de-stuff containers at the Liquor Control Board of Ontario’s (LCBO) warehouses, workers were coming in early to ensure they got to use the machine.

The unit in question is a Destuff-IT unloader built by Engineered Lifting Systems in Elmira Ontario, and the story of how it came to be is a shining example of creativity and ingenuity coupled with persistence.

Before Destuff-IT, if you worked in material handling at one of the LCBO warehouses in Durham, London or Toronto, chances are you spent 7.5 hours a day unloading cases of internationally sourced, fragile and expensive vintage wines that weigh nine to 18 kg and require manual handling to prevent product damage. In a typical shift, you lifted at least 400 cases from their spot in the trailer—anywhere between the floor and ceiling—then pivoted to place each one on a conveyor about three feet off the floor. Because shipments often contained irregularly stacked, mixed product, workers manually sorted the cases while unloading to make it easier for their colleagues upstream in the warehouse. As well, two workers were required to push and pull coupled sections of the flexible roller conveyor into position and finally relocate it to the multiple staggered docks, all of which was time consuming and strenuous. 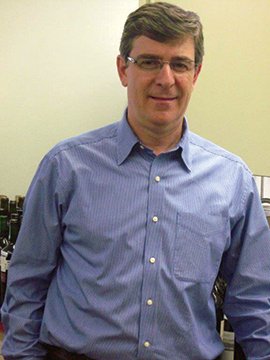 “The nature of the de-stuffing task with all of the repetitive lifting, twisting, carrying, pushing and pulling was such that employees were prone to musculoskeletal type injuries and certainly suffered fatigue as a result of the various case weights,” says George Soleas, executive vice president, LCBO, Toronto.

“Employees were often off due to injuries and productivity suffered when case weights were in the upper region of the maximum.”

According to the Canadian Centre for Occupational Health and Safety, manual material handling is the most common cause of occupational fatigue and low back pain. In fact, about three of every four Canadians whose job includes manual material handling will suffer pain due to a back injury at some time. Such back injuries account for about 33 percent of all lost work and more than one-third of all compensation costs. On top of that, thousands of Canadians are permanently disabled by back injuries every year.

The LCBO’s Health and Safety committee was committed to finding an ergonomic solution that would ease the negative impact on employees while reducing the unloading time and increasing warehouse capacities. Fully automating the unloading process wasn’t viable due to the related equipment cost and the risk of product damage and loss.

“We’re constantly looking at how we can identify opportunities for improvement,” says Soleas.

“In this instance, we knew the task was labour intensive and that there were initiatives within the logistics world that were being explored by companies around the globe.”

“We found and tried a machine from Denmark, and while it looked promising, it ultimately didn’t work with the types of packaging we had,” says Soleas.

Fortunately, Bruce Pizzolato, director at the Durham facility, is a positive and creative individual with a deep appreciation of 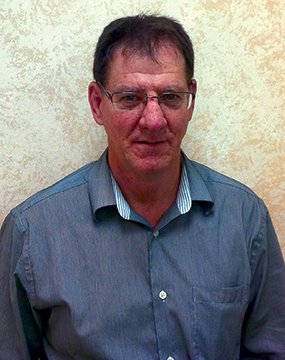 the potential benefits of automation and a true understanding of ergonomics. He was convinced if he couldn’t find a ready-made solution, he could come up with the concept and find a firm with the engineering and manufacturing capabilities required to design and build it.

“This wasn’t the first time the LCBO had taken this sort of approach,” says Soleas. “We’ve done it before and don’t find it at all unusual.”

The individuals who face challenges every day are often the best equipped to develop the ideas that will drive the solution. The LCBO recognizes product design, development and production are not their core competencies and readily outsources to experts when necessary.

Pizzolato did his research, then leveraged his insights and experience to determine the most ergonomically friendly way to “de-stuff” a container. The key was to reduce or eliminate the lifting and carrying of the heavy cases.

Pizzolato had a lightbulb moment. Rather than have the case come to the conveyor under person power, the conveyor comes right to the case with the help of a hydraulically or mechanically powered, flexible attachment. If the attachment could be moved along both vertical and lateral axis, the employee’s primary task would then be positioning the attachment and sliding the case onto it rather than lifting, twisting and carrying.

The LCBO identified and approached Engineered Lifting Systems (ELS). The firm has been designing, building and installing standard and customized bridge cranes, jib cranes, monorails and transfer carts with capacities ranging from 20 lb to 20 tons or more for a variety of sectors since 1971.

“About 50 percent of our total volume is custom, which can mean developing a product from scratch or modifying an item that’s part of our standard, off-the-shelf product range,” says Richard Kat, vice-president of sales and marketing at Engineered Lifting Systems & Equipment Inc. “We let customers approach us with challenges and we collaborate on the solutions that we develop and fine tune based on customer input, trials and market research.”

It took about two years to take Pizzolato’s initial concept through to the engineering drawings, manufacturing, testing and adjusting the prototype that was trialled at the LCBO’s Durham facility. At that point, the final design was ready for production and after many tweaks and changes to the design over the next two years, the unit was patented in the US in 2013 and is patent-pending in Canada.

Customers invariably ask: “Can you design and build it?” Destuff-IT’s answer: “We can do anything if you give us enough time and money,” says Kat. 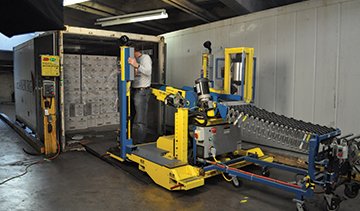 The unit won’t move unless a person is standing on the pressure-sensitive ergo mat at the operator’s station.

ELS developed a unit with an adjustable-height hydraulic platform that can move one or two employees (maximum weight 500 lb) up or down to the case. The user can then raise or lower and pivot the conveyor from side to side to reach the container’s corners. The unit has laser sensors at each of its four corners to prevent collisions, and a pressure-sensitive ergo mat that prohibits motion unless an operator is aboard. Emergency stop buttons and a touch-sensitive safety bumper will also halt the unit. The entire unit can be “driven” further into the container under battery power.

“The product evolved significantly from the initial napkin sketch the LCBO supplied, to the final machine that would become a part of our standard lineup,” says Kat.

What is the key to making such a partnership work and ensuring it produces a viable end product? Of course, communication is vital. The more the customer shares with ELS engineers, the better they’ll be able to come up with a design that addresses the issues. It also helps if customers are receptive to onsite changes such as improved layouts to facilitate workflow and make room for equipment.

“We can’t be experts on every business out there so we need you to tell us what’s important to you and your employees,” says Kat, who also recommends making employees part of the process since they’re the ones who will use the equipment daily and best understand the challenges. “Get employees engaged early on and they’re more likely to accept and even welcome the final product.”

Adds Soleas: “You have to OWN it and actively participate through the entire process. You can’t walk away at any point and hope you’ll get what you want. If you want a quality product that meets your expectations, you need to work collaboratively with your partners.”

In a typical warehousing environment, the Destuff-IT unit can boost the case rate by up to 75 percent. Generally, two people can manually unload 300 to 575 cases per hour, while the Destuff-IT easily handles 900 cases/hour or more. To match the new pace set by the Destuff-IT units, some users have to hire additional employees to staff palletizers. Some customers have even experienced a reduction in the total hours required to unload, even when personnel added to the palletizing department are taken into account.

The LCBO’s Durham location now has 11 Destuff-ITs, the London operation has two and the Toronto warehouse has one. Employees gave the units an immediate thumbs-up because the machines made their jobs easier and they went home with energy rather than exhausted at the end of the day. During the trial phase in Durham, the employees, who knew the dock you get at the start of the day is yours for the entire shift, made a point of beating colleagues to work to reap the benefits of the Destuff-IT.

“The equipment is so simple, employees required very little training, but in the early days, we needed to remind them that the Destuff-IT was there to do the heavy lifting and that we wanted and expected them to take full advantage of the equipment,” says Soleas.

At the Durham location alone, the LCBO expects to save about $121,000 annually since the Destuff-IT boosts productivity by cutting the average time required to unload a container by more than half. In this application it can handle 650 cases/hour up from 575 cases/hour. Previously, it was a two-person job but with the Destuff-IT, one person can unload a container, which has resulted in labour savings.

“The ROI on our investment was approximately nine months and over a consecutive three years, thanks to enhanced ergonomics, training, standard operating practices, culture changing initiatives and to an extent our new DestuffIt units, our logistics departments have experienced an 82 percent reduction in lost-time accidents and a comparable decrease in WSIB expenses,” says Soleas.

“Workers are naturally and understandably leery of any semi- or fully automated device that might take jobs away from people,” says Kat.

“However, we’ve found that once they realize our units always require at least one and sometimes two operators, while dramatically reducing the height and distance they need to lift the cases, they tend to embrace the change.” MM&D