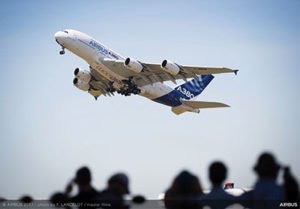 When Singapore Airlines flight SQ380 took off on Oct 25, 2007, it opened a new chapter in the history of air transport: it was the inaugural commercial Airbus A380 super-jumbo flight, connecting Singapore to Sydney, Australia.

This was the culmination of a development process that began in the early 1990s when the aircraft manufacturer started to examine developing a jumbo jet with a capacity of over 500 passengers to compete with the Boeing 747. Engineering and design on the A3XX started in 1994. The re-named Airbus A380 made its first flight on April 25th, 2005, and entered commercial service in 2007.

A bit of history

The European Airbus consortium was created in 1967 by France, Germany and Great Britain to compete against Boeing, the then-dominant force in the industry. When Great Britain pulled out in 1971, Spain became a partner to the project and Airbus’s first aircraft, the A300 passenger jet, had its inaugural flight from Toulouse, France in October 1972.

By the 1990s, the competition between Airbus and Boeing created a duopoly in the jet airliner market, as Boeing bought out competitor McDonnell Douglas in 1997 while other companies like Lockheed Martin, Convair, Fairchild, British Aerospace and Fokker, withdrew from this market.

Airbus and Boeing account for 85 percent of the market today, with smaller players like Bombardier, Embraer, Tupolev and Comac sharing the balance. In October 2017, Airbus took a majority stake in Bombardier’s C-Series jetliner program.

The double-deck A380 is the world’s largest commercial passenger aircraft flying today. It has two full-length decks with wide-body dimensions. A typical A380 generally carries around 555 passengers in a three-class configuration and can accommodate up to 853 passengers in a single-class economy configuration.

Its design range is 15,700 kilometres, cruising speed is about 900 km/h and maximum take-off weight (MTOW) is 569 tons. An enhanced A380, called the A380plus, with increased range and capacity but reduced fuel usage, is being developed. 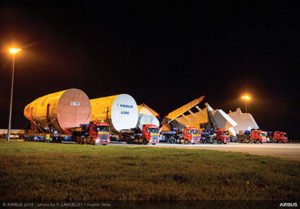 Major airframe sections for the first All Nippon Airways A380 arrive at the Airbus final assembly line in Toulouse, France. (Photo: Airbus)

To successfully carry out this extraordinary project, Airbus had to create a completely new supply chain and build the infrastructure to manufacture these huge planes, with massive new facilities in France, Germany, Spain, Wales and England. The various parts that make up the jumbo jet are shipped by boat, barge, truck and plane to Toulouse, in South-West France, where a new facility was built for this purpose at the Blagnac airport. Airbus SAS has its corporate headquarters in Toulouse.

The final assembly and testing process takes between 10 to 12 months. An A380 has over four million parts and the plane is so big that it is built in six main pre-fabricated sections: three fuselage sections, two wings and the tailfin. 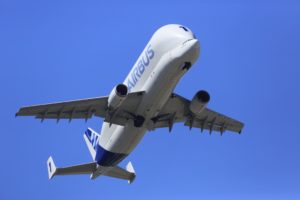 Of these six major components, the first five travel by ocean and the tailfin travels by air, on one of five specially designed Airbus A300-600STs, nicknamed “Belugas”. In service since 1994, the Belugas are unique cargo aircraft designed to carry oversize pieces between Airbus manufacturing sites and their final assembly lines in Toulouse, Hamburg (Germany), Mobile (Alabama, USA) and Tianjin (China).

In order to carry the other massive components between their European plants and the Toulouse Final Assembly Line, Airbus operates a fleet of three custom-made ocean-going vessels of the roll-on roll-off (RO-RO) type. No crane or lifting equipment is necessary to load or unload the components, as they are mounted on custom-made trailers that are driven on or off the vessels, to minimize the risk of damage. These three vessels carry the major pieces between Airbus facilities in France, Germany, Italy, Spain and Wales, all landing at the small port of Pauillac in south-west France, where Airbus has its own dock.

From Pauillac the parts journey 110 kilometres, up the Gironde river, then the Garonne river on one of two custom barges that make their way to the river town of Langon, a quiet village of some 6,000 inhabitants, more renowned for its white Bordeaux and Graves wines. The transit to Langon must be planned very carefully; when the barges go through the city of Bordeaux, they have very little clearance under the magnificent Pont de Pierre, the city’s oldest bridge, designed under Napoleon and built in 1810. The barges can only proceed at low tide and have a very narrow window. 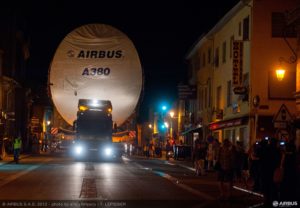 A section of fuselage dwarfs buildings as it moves through a town.

In Langon the last leg of the voyage begins, as the pieces are transferred from barges to specially designed road trailers, for haulage through the picturesque French countryside up to Toulouse, some 240 km away. That journey takes at least two days as the oversize convoy can only travel at night. And in spite of by-passes and roundabouts that have been built to improve the roads and minimize the risks, the vehicles have to proceed slowly.

When the final assembly work on the aircraft is completed in Toulouse, a key component has to be fitted: the engines. This is the last step, as the engines are usually selected by the airline that has ordered the plane. Then the final tests and, eventually, the inaugural flight can take place.

The future looks bright for the A380. Airbus does not have any real competition in this segment any more, since Boeing announced last year that it is phasing out production of the famed B747, the only other passenger jumbo jet currently in service.

In January 2018, Dubai-headquartered Emirates Airline ordered 36 additional Airbus A380s, to be delivered from 2020 onwards, confirming it as the A380’s largest customer, ahead of Singapore Airlines, Lufthansa, Air France, British Airways and Qantas. The total order book for the A380 jumbo plane stands at 331 units, 226 of which have been delivered and 226 are in operation at time of writing.