Automation promises to solve the challenges of e-commerce fulfillment and the labour shortage. Cobots are a promising and rapidly developing technology, but are they ready to lend a hand? 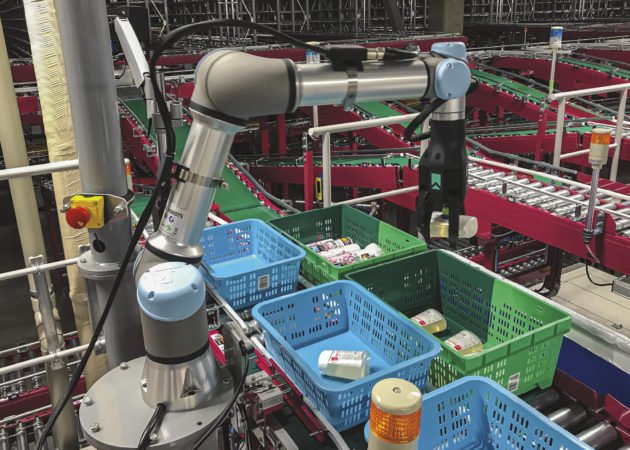 Of all the jobs best assigned to robots, the disablement of improvised explosive devices (IEDs) belongs high on the list. It is also one of the toughest tasks to automate.

The difficulty is that no two of these devices are alike – the robot has to recognize the bomb, analyze its structure, develop a strategy for handling it, and then activate a robotic hand capable of sensing, gripping and manipulating virtually any IED successfully.

The challenge has inspired some of the most creative minds in the robotics field to participate in competitions sponsored by the US Military’s Defense Advanced Research Projects Agency (DARPA), where competing robots execute a series of tasks that mimic the roadside bomb scenario. One result was the contest-winning gripper technology developed by a Harvard robotics team and now manufactured by Boston-based RightHand Robotics (RHR) for piece-picking applications in warehouses and distribution centres.

“They [the RHR founders] wanted to design robotic grippers that were better at dealing with the randomness of things like improvised explosives,” says Vince Martinelli, head of product and marketing at RHR. “It could really handle a wide range of items with one gripper type.”

Can you handle it? 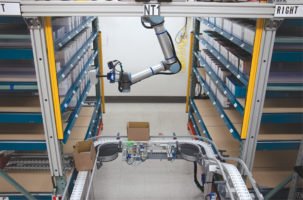 This cobot system at DCL’s facility can accomplish in two hours what it would take five humans to do in an entire day.

Versatility is key in today’s warehouses and distribution centres where it’s becoming increasingly probable that the device will be handling an item for the first time. “That’s less critical in some manufacturing factory environments, where there’s more structure,” says Martinelli, “but a supply chain warehouse is a less structured environment – items are loose in a bin, there are a million different products, and packaging changes all the time.”

As e-commerce continues to grow at 15 percent to 20 percent a year, more and more distribution centre employees are spending their days grabbing single items rather than picking up pallets or carton loads with a forklift.

The new paradigm has become a double-edged sword for supply chain operations. On one hand, one-of-a-kind picking that is typical of e-commerce is a very inefficient use of labour, and that’s especially problematic in today’s tight labour market. On the other, the endless variety of items to be picked makes automation difficult.

The problem is work that is routine for a human picker can be difficult for a robot. “Very simple things can actually be very tricky,” says Animesh Garg, an assistant professor of computer science at University of Toronto who specializes in machine learning algorithms for perception and control in robotics.

Garg uses the example of asking a robot to retrieve a can of pop from the refrigerator. If it’s not immediately visible, the robot has to move items around to determine if the can is there or not – a task that is very difficult to program.

“We can barely do ‘see it and get it,’” says Garg. “Anything beyond that requires long-term reasoning and planning, which gets very hard very quickly.”

“To pick items out of a tote where orientations are all different, that requires seeing,” says Martinelli. “It requires making decisions about which things are objects. Where does one start and one end? How should I position the gripper? How do I get the arm there without banging into something? How can I know for sure that I have it? And so on. That requires a lot more computing horsepower.”

RHR has developed a robotic vision and machine learning-based control system, and has released a picking solution called RightPick2, which works in conjunction with RHR’s robotic gripper and a UR5e collaborative robot from Universal Robots. The combination set a world piece-picking record at Modex 2018. 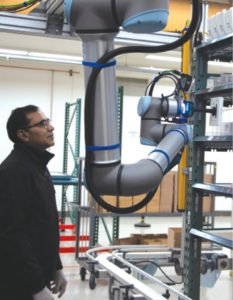 The cobot in the DCL facility demonstrates how it will stop if a person gets too close.

Much of the automation technology in warehouses and distribution centres has been introduced in hand-me-down fashion from manufacturing, and results have been mixed.

“Robots have traditionally done very well in structured environments; performing tasks that are uniform and repeatable,” says Carl Vause, CEO of Boston-based Soft Robotics, another robotics company that is making forays into the intralogistics space. “E-commerce distribution and modern order fulfillment centres are quite the opposite. Reliable handling of products with sometimes unlimited variation is a significant challenge which requires a full-stack solution including a robot, vision system, and end-of-arm-tool that work together in concert to perform the dull task of picking a wide variety of items for fulfillment.”

Manufacturing, however, is also adjusting to the transition to a low-volume high-mix environment, and that is spurring the development of technology better suited to the challenges facing intralogistics. One example is better vision systems.

“Vision as a tool has become more prolific and easier to use, and we’ve gone from 2D to 3D vision, and being able to identify a unique product profile,” says Brian Dillman, vice-president of national sales at Belcamp, Maryland-based Automated Motion Robotic Solutions. “For the robot people, the holy grail has been 3D bin picking. You can have a tote full of product that is non-homogeneous and tell the robot to pick up the rubber duck, pick up the shampoo, or pick up the razors. And by pattern matching and by identifying the product by its intrinsic appearance, the robot can then go find the six-pack of razors in the box.”

Another response to the smaller batch trend is the introduction of collaborative robots or cobots, which represent a significant departure from the classic high-speed, large-format industrial robots that have defined the field for the past fifty years.

“I think the industrial robot people were originally a little reluctant and a little dismissive of the cobot,” says Martinelli, “but now, they’ve proven that they can work well enough in the right application so that the industrial vendors either have a cobot offering or advanced safety mechanisms to slow the robot down so people can approach safely. That’s a big change from caging the robots off.”

“The question is, ‘how do we put automation technology in the hands of more people?’” says Dillman. “The advent of collaborative robots is twofold. They take up less space and are lightweight. They run on 110V single phase. And there’s an ease of use and an ease of programming aspect that is promoted by collaborative robots in conjunction with the idea that a robot that can work in close proximity safely with a human allows you to automate in different ways.”

There are, however, significant limitations. Because these devices are small and light, they have a limited reach, and the payload is relatively small – the Fanuc CR35i, one of the larger cobots, can only handle 35kg. Furthermore, cobots are slow – ANSI safety specs limit the rate of motion of the robotic arm to one metre per second, and even less for heavier loads.

Another constraint is that robotic arms are still relatively expensive, and when they are frequently moving throughout a facility, they aren’t being utilized much of the time. “As the robot is driving down the aisle, any time the arm isn’t reaching to pick something is kind of wasted,” says Martinelli. “So low utilization is a problem.”

Getting a hand up

A decade ago, many believed we were on the verge of the fully automated facility. Today’s reality is that we’re not there
yet – what’s typical, Martinelli explains, is a series of automation zones with human workers filling in the gaps.

“At every junction between the automation zones, you’ve got people standing there moving an item from this machine’s domain over to that machine’s domain,” says Martinelli. “One of the images that comes into my head is the switchboard operator from days gone by. There were times when communications networks weren’t completely automated.”

The emerging mindset is to join these islands of automation one step at a time. “Companies are learning to take this incremental approach,” says Campbell. “The e-commerce work that I did seven or eight or nine years ago, we were trying to solve the whole problem. Today, the whole automation community is coming to a different understanding.”

The approach is being applied in a recent implementation by Silicon Valley-based fulfillment provider DCL Logistics. The solution involved the deployment of Universal Robots UR10 cobots that are suspended from ceiling-mounted tracks and travel and handle materials in areas frequented by humans.

“Universal Robots provided a solution that fit our needs,” says Brian Tu, chief revenue officer at DCL. “It’s modular, so we could scale slowly and understand what we need. Number two, it was flexible in the way it was programmed so we can build and integrate into our systems very easily. And number three, it could work alongside our current workforce, and that was really important to us: making sure that the robots would augment what we’re currently doing.”

One of the conundrums that adopters will have to face is whether or not to combine e-commerce and traditional business in a single operation. Few organizations have the volume to support a dedicated e-commerce facility, yet hosting the two modes in a single facility can be extremely disruptive in that e-commerce business commands a disproportionate share of the work force.

Furthermore, while robot prices are plummeting, the technology is just breaking ground in logistics, and it will be some time before business cases emerge for the rank and file of logistics facilities.

“There aren’t a lot of companies in Canada that have the volume and the range of products to justify that technology,” says John McKenna, president of Mississauga-based 3PL McKenna Logistics Centres. “Eighty percent of distribution centres in the Toronto area are probably twenty employees or less.”

Rather than search for technology solutions to tackle the labour shortage, companies might be well advised to take a hard look at their processes and identify how technology could help improve them.

“People get ideas and are star-stuck,” says McKenna. “But you really have to look at it in the cold light of day, and ask, really does this make sense?”

McKenna also notes that technology isn’t the only way to improve productivity – personnel who stay with an operation for two years or more, a study showed, gain tacit knowledge that allows them to improve their productivity significantly.

“It’s a whole lot cheaper to optimize your process before you automate it,” McKenna says.