From mail-order to omnichannel for camping equipment retailer 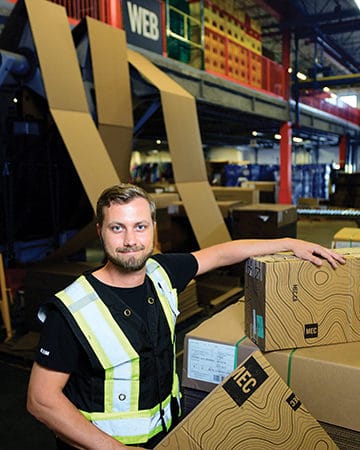 MEC (Mountain Equipment Co-op) has come along way but never strayed from its roots. The mountaineering equipment co-op was founded by six avid climbers from the Vancouver, British Columbia, area back in 1971. The original staff were all volunteers, and its ﬁrst catalogue was a one-page poster stuck on the door of the UBC Student Union.

Now the co-op, which has always charged $5 for a lifetime membership, boasts ﬁve million members, 22 retail stores across the country, and two distribution centres. Driven by a passion for enabling everyone to get outside, the co-op not only operates retail stores but also pursues goals of sustainability and stewardship.

It sells thousands of outdoor gear items and backcountry food supplies from its stores and website, delivering the e-commerce items to its members via Canada Post or in-store pick-up. Customer orders are either fulﬁlled in the stores or from one of the co-op’s two distribution centres, the Western one in Surrey, B.C. and a newly commissioned Eastern DC in Brampton, Ontario.

Willis Gourlay, the co-op’s Western distribution centre manager, is overseeing a major operations transformation. The DC he manages was built in 2008, back when the company was retail and mail order only. “We used to have a magazine,” he says. “People would write in their orders. But now we’ve come into the 21st century with online omnichannel orders and our systems are catching up.”

And with a minimum of automation, a green-screen control system and many legacy processes, Gourlay sees a “lot of opportunity” to streamline operations.

MEC has been working on an ERP upgrade since 2016, and it’s being implemented in phases, with ﬁnance and procurement already up and running. They have opted for a Microsoft Dynamics system, with an add-on WMS for the warehouse. “For the most part, our operation…was completely green screen and Excel queries, so adding Microsoft Dynamics is going to allow us better business reporting, some BI reporting that we haven’t had before, a lot better dashboard where we’ll be able to have real-time data at our fingertips,” Gourlay says.

The WMS provider had not been selected at the time we spoke to him, but Gourlay expects to be live with the new systems in early 2019. One concern they are dealing with is ensuring it’s compatible with their Honeywell handheld RF scanners, and that the user interface is binary rather than requiring a lot of scrolling. “We want to make sure we’re not going to kill our productivity with onboarding a system that’s not adapted to, or reﬁned enough for, warehouse use,” he says “We don’t want to create more work.” 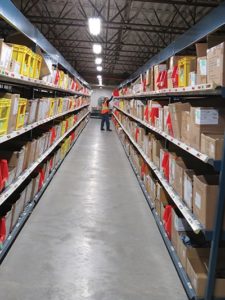 With only a small amount of automation, the DC is still able to process 1,000 e-commerce orders a day, in addition to regular store deliveries. Competing in a 24/7 e-commerce world has already forced some changes at MEC. Shifts have gone from ﬁve days a week to six, and now it’s seven, but with only one shift (from 7 a.m. to 3:30 p.m. on weekends). Gourlay says that if the company ever gets to needing a 24-hour operation, further signiﬁcant changes will be required.

It could happen. MEC’s e-commerce business grew by 30 percent last year, and right now the Western DC is handling 35 to 40 percent of those orders, with 15 percent done from the Brampton DC and the rest picked at stores. Of the co-op’s annual revenue of $455 million, about $35 million is e-commerce from the DCs.

The Surrey facility is 180,000 square feet and employs 80 unionized staff and seven managers to handle about 40,000 SKUs. Stock is stored in very-narrow aisle pallet racking, a carousel and a mezzanine unit.

The DC serves stores from Manitoba to B.C. It receives about 350 40-foot trailers a year, and about 100 store deliveries are made per week across the network (that includes from the Brampton DC). 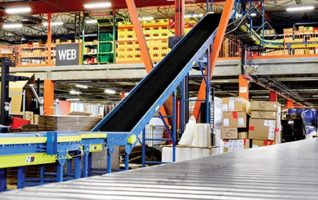 The mezzanine is too low to allow forktrucks underneath. (Photo: Ryan McLeod)

According to Gourlay, the biggest issue he’s facing at the DC is flow. “It’s because when they built this building, you’ll see a couple of flaws, the equipment that’s used in the building can’t access certain parts of the buildings because it’s too low. Because of that we lose signiﬁcant efﬁciencies.”

The design flaw is the mezzanine, which does not allow for the material handling equipment to move underneath it. This means that when inbound inventory arrives it is balmed off the trucks and then has to be organized and staged manually for pickup about 40 feet away on the far side of the mezzanine.

Recent tweaks have addressed some issues, like the individual boxes of shoes stored in the full-height racking that required a man-up order picker to scale the heights for each pair required. These have been relocated to an easier pick location.

The DC also has three picking methods in use, handheld RF units, the carousel and pick-to-light. Gourlay says a decision had to be made about whether to integrate them into one style, or keep the legacy systems.

“We found that pick-to-light is actually about two times faster to pick than the handheld scanners. You’re not holding anything in your hand, you’re just pressing a button then you’re moving on to the next pick location. You’re getting the light, you’re counting the numbers, and you’re moving on,” he says.

The downside is with the pick-to-light and carousel he’s got limited robust real-time data about accuracy. But the plan is to integrate them into the ERP and with the handheld upgrade as well.

“I’m hoping that we’ll have that capability and have a little bit better reporting and inventory management as we get onto the new system,” Gourlay says. “So that’s what I’m looking forward to, ‘cause I’ve worked with probably eight different systems in my career and this is deﬁnitely the one that needs the biggest facelift and the one that I’ve seen that has the most opportunity for improvement.” 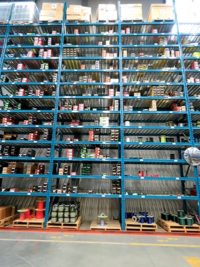 Individual boxes of shoes were hard to pick in the high racking. (Photo: Emily Atkins)

Gourlay doesn’t expect to see big productivity gains with the new system. What he does hope for is improved traceability, inventory management, and better e-commerce fulfillment. “Right now it’s a lot of manual matching-up of invoices to SKUs in our e-commerce. Our new system will be scanning the SKU, that’ll conﬁrm that the right SKU is going to that right order, and the invoice will print off.”

Before he took on the top job at the DC last March, Gourlay assisted in creating a vendor non-compliance program that was implemented in January 2018. With 850 vendors ranging from huge multinationals like Nike and Adidas, to local mom-and-pop suppliers, the information available to MEC on product weight and dimensions varied just as widely. In 2013 75 percent of inbound product was non-compliant in some way. Issues ranged from packaging, to case pack counts, to ASNs and so on.

Gourlay did a study and found that those issues were requiring 30 to 40 percent more labour to process because they had to be so carefully checked. “It was so onerous it would literally bog down our dock,” he says.

With the new program, he’s seeing improvements, but there are still issues. “Some smaller vendors don’t understand how vital cube dimensions are for our DC; they’re just sending product to us in a box,” he says. “It’s not something on their radar. And rightly so. It’s probably not a priority for them.”

But it did – and does – cause issues at the DC. Every product that’s brought in needs to have cube data in the system, and the scanning machine that stands by at the inbound dock cannot capture it all automatically. Some items are packaged in shiny material that reflects the scan beam. Also, Gourlay says, there are many ways to potentially package soft articles for shipping: “You could lay it out. You could scrunch it into a sushi roll, you could scrunch it into something smaller. You could fold it. So, depending on how you physically lay the shirt out you could have completely different cube data.”

The Western DC is the only one with a cube scanner, even though the Eastern DC needs the data to set their min/max numbers and feed replenishment orders. The problem is that only 10 to 20 percent of the data comes from the vendors. The rest is manually generated.

For the Western DC this data is meant to guide the packaging process for outbound orders. MEC recently acquired a PackSize box-building machine that can take the cube data from an order and create a right-sized box from 22 pre-set choices to minimize shipping volume and keep postal costs down. But MEC is ﬁnding that the mix of products it’s shipping is posing a few challenges with the machine that end up either wasting expensive, printed corrugate or requiring box selection to be done manually by a very experienced DC associate.

Putting the efficiency in e-comm 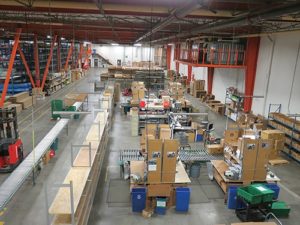 With the new ERP coming online soon, Gourlay has a few plans. He expects to invest a little in changing the layout, but not until they’ve had a chance to see “what we’re able to do a little bit better” with the new software. Then he wants to work out a solution where the ERP can direct the machine to make the right boxes when needed, and direct other orders to parcel mailers. “It would be great to get it so that we’re not wasting a single ounce of corrugate, we’re making only boxes we need,” he says.

With e-commerce growing, he believes the co-op needs to have a more uniﬁed strategy for its packaging, using the same corrugate to send from each DC and store, as well as ﬁguring out if they should phase out the mailing bags, which Canada Post says tend to fly off their conveying systems or get stuck because they are so light and flimsy.

“We need to dive in a little bit more. There’s a lot of opportunity there,” Gourlay believes.