It was a move so long and complex, nothing was left to chance. Even a mobile washroom was taken along. Yet, the pickup and delivery locations were only 17 kilometers apart, as the crow flies.

For Precision Specialized, the 118-km journey began Sept. 28 for what company president Ed Bernard dubbed “by far the most complex, biggest, most difficult thing we’ve ever done.” 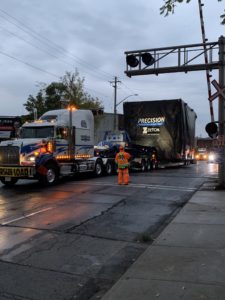 Seven loads were moved in a convoy over six nights, ranging in weight from 260,000 to 320,000 lbs, with overall dimensions of up to 125’ long, 26’ wide, and 24’4” high. The items being moved were power generation modules, going  from manufacturer Zeton’s Oakville, Ont., plant to the Port of Hamilton. From there they were loaded aboard ships for further journey to a customer overseas, but Precision Specialized’s work was complete.

“We had budgeted and planned for five to seven nights’ travel and made it in six,” Bernard told Today’s Trucking when the delivery was complete.

It took nearly two years to plan the delivery. In fact, Bernard said he began making arrangements even before Zeton committed to the project, to help the manufacturer determine if the job was viable.

There were eight loads in total, including the seven in the convoy. The smaller eighth load traveled on the highway. More than 70 subcontractors were enlisted to help. The oddest requirement was the mobile toilet, since the route took those 70 people as far off the beaten path as possible, late at night to minimize the disruption to traffic and residents.

Other subcontractors along for the trip included bucket utility truck operators, police, superload escorts, a mobile mechanic, a spare tractor and two spare escorts, a tire truck, and even a food truck.

The biggest risk in a job of this magnitude, said Bernard, is falling behind schedule.

“There are a lot of moving parts,” he explained. “A lot of people will lose their power and we want to make sure we keep to our schedule.”

And then there’s the Covid-19 pandemic to throw a wrench in things. While those working on the project weren’t closely congregated, precautions still had to be taken at planning meetings, including temperature checks, masks and social distancing. When the move began, Bernard likened the work environment to a “quarter mile bubble that’s traveling and that you can’t get into.”