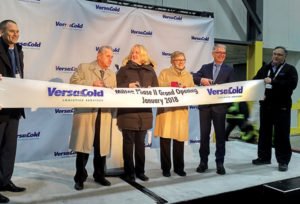 As if it hasn’t been cold enough this winter, it just got chillier in Milton, Ontario with the opening of VersaCold Logistics Services’s new multi-temperature cold storage facility. Grand opening ceremonies took place on January 11, 2018.

When complete, the building will include three phases, but for now the company celebrated the operational startup of the first two phases. Together the two segments encompass 255,000 square feet and
9,336,408 cubic feet, with 25,958 pallet positions.

Multiple temperature zones, from 4C to minus 30C, will accommodate a wide range of food products, largely from Nestlé Canada, VersaCold’s main partner in the facility. The Milton DC will be shipping 2.7 million cubic feet of ice cream, 48 million pounds of pizza and 51 million pounds of frozen meals in an average year.

Driven by changes in the food industry and robust demand for temperature controlled storage, the two companies characterize the new DC as a strategic partnership; once fully operational Nestlé Canada will occupy more than 50 percent of the cube. 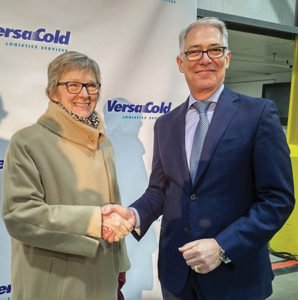 “Our frozen network was in three different warehouses, three different direct-to-market systems. As we are endeavoring to become a lean enterprise, taking as much waste out of the system as possible, it’s a lot of bulk and a lot of pallets and a lot of SKUs that need to be managed,” said Shelley Martin, Nestlé Canada president in an interview with MM&D at the opening. Partnering with VersaCold on the new building “was how to we get everything – these three big businesses – into one…more efficient way that we can take some cost out and improve the service level to consumers, our customers.”

Douglas Harrison, VersaCold’s president, added: “We’ve been under a transformation focus for the last four years, invested heavily in our network…We see great growth opportunities in the market in Canada. Our estimation is frozen or refrigerated supply chains are about a $10 billion market. We’re the largest player, but we’re a very small part of that entire footprint.” 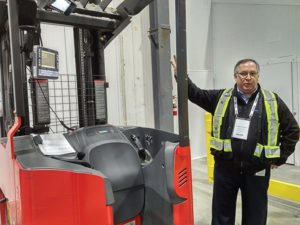 George Jenkins shows some of the facility’s Raymond material handling equipment that is using the iWarehouse system to monitor performance and ensure safety. (Photo: Emily Atkins)

Part of the impetus behind the new building is increasing demand for innovative frozen food products, Martin said.
Harrison agreed, noting that Canadian companies are increasingly “filling international demand for food” and that frozen and refrigerated foods are becoming more sophisticated in terms of “freshness, quality, and healthiness. It requires more sensitivity and handling. We’re spending more time investing and focusing on how we train people in terms of handling requirements, and that’s requiring greater capacity and greater availability.”

The Milton DC projects throughput of 17 million cases per year, with 30 inbound and 60 outbound loads a day. At the moment 49 staff are working in Phases One and Two, and when the building is operating at steady state VersaCold expects to employ 135.

Phase Three is scheduled to be open by the end of the year. MM&D will be bringing you an inside look at the facility when it’s fully operational.