Welcome to the next normal

How the pandemic is prompting enduring change in supply chain operations 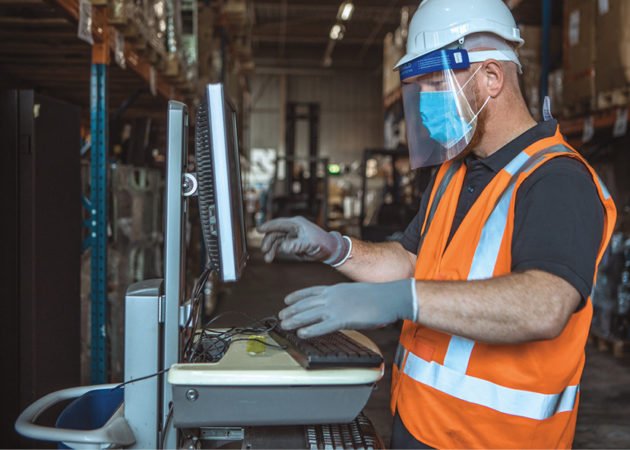 As the global Covid-19 pandemic stretches into its eighth month, the frantic panic-and-pivot activity of its initial phases is evolving into a novel normalcy. Supply networks – stretched to their limits – either broke or rebounded into a new form.

For some, it was unprecedented demand that forced a change. For others it was a complete collapse of one market that prompted a pivot into a new one. In either case, however, we are now seeing the creation of the next normal – the new pathways and accommodations to adjust to the continuing demands of the pandemic-tinged world.

While the changes are widespread and creeping into just about every corner of business, the main impacts on supply chain operations are seen in digitization and automation, changes to network design, health and safety measures and in retail – specifically e-commerce – fulﬁllment.

Before the pandemic struck, digitization and automation were already hot topics in SCM. But as the effects of the pandemic shutdowns and uncertainty compounded with soaring demand for online shopping, it became clear that automated and digital processes were becoming necessities, not nice-to-haves.

“Automation will be even more embedded in companies’ operations as we emerge from the pandemic,” says Scott Ashbaugh, vice-president of operations, DHL eCommerce Solutions. “Digitization is the key to becoming more effective and efficient and to creating growth opportunities – especially facing a new ‘normal’.”

DHL e-commerce Solutions saw demand soar, accelerating its automation plans. “With Covid-19, the surge in e-commerce volume put our equipment to the test, with us currently processing volumes we expected we would see in five years. This acceleration has sped up our plans to further automate our network,” says Ashbaugh.

The pressure to enforce physical distance in the fulfillment centre is exacerbating an already tight labour market, noted Sedlak vice-president Louis Cerny. “Anywhere you see people fulfilling an order is going to be a target for automation going forward,” he said. “It will enable people to work in a safe environment and not worry about interactions.” Practically, he believes this will be the implementation of more goods-to-person robotic technologies, using autonomous mobile robots similar to the ones Amazon deploys.

“This pandemic hit everybody like a ton of bricks,” says Jason Haelzle, principal and vice-president of the agriculture and food team at global consulting firm GHD. “Flexibility is going to be the driver, long term, and in order to get that flexibility, you need visibility. Some businesses are going to AI and digital models that enable them to see what’s happening with real time data.”

Where before the pandemic it was it was still possible to “somewhat predictably” manage with data a month after the fact or even quarterly, he says, companies “based on that older model certainly suffered more than those that were more flexible.”

Retailers are facing some remarkably volatile conditions thanks to the pandemic. While already-suffering bricks and mortar stores were forced to shut down, e-commerce exploded as people were made to remain at home. This is forcing a rapid expansion of e-commerce capabilities for many, even those already well entrenched in omni-channel commerce.

The reduction in order-to-delivery times and increase in SKUs being sold online “increased the complexity of fulfillment activities and made effective forecasting – fed by consumer data and insights – an even bigger priority in inventory management,” said DHL Supply Chain’s president of eCommerce for North America, Kraig Foreman. “With Covid-19 throwing buying behaviors and with that, retailers’ ability to forecast, into disarray, our customers have realized that data is still important, but it also needs to be supplemented by lean, efficient operating platforms that are responsive to sudden changes in demand.”

To that end, retailers are trying to find ways to use the existing technology and facilities they have to better meet the changing needs of the marketplace. It’s not just fulfilling e-commerce orders, either, Cerny said. There will be people who want to shop in a physical store, which is turning into a different kind of space, with a small storefront backed by a larger storeroom that’s fulfilling all kinds of orders. While the microfulfillment trend had legs prior to the pandemic, it is being propelled by the need for faster local delivery. “If you are a retailer not thinking six months or two years down the road you might not be around,” he cautioned.

When vast segments of the world’s manufacturing shut down during the initial stages of the pandemic, supply chain operations were caught short. A cascade of unfilled orders and stockouts on retail shelves were a shock to systems that rely on just-in-time fulfillment.

This has prompted a long, hard look at how inventory is managed and where inputs are procured. Haelzle suggests that companies will be looking to diversify their sources of supply, both in terms of location and in the number of other organizations they rely on. “Rather than relying solely on China – the low cost model – you’re starting to see people looking at India, Vietnam, Mexico, Eastern European countries. Certainly not going to be as cost effective as China but it’s going to have to greater resiliency longer term,” he says.

Haelzle also sees a possible withdrawal from outsourcing arrangements as companies seek to gain better control over their supply chain. Foreman at DHL suggests that business continuity will gain importance. “Operationally, companies are going to approach this in different ways, but at the most basic level, we anticipate that most of our customers will move away from single, centralized distribution centres toward multiple distribution nodes that offer redundancy, flexibility and speed to market,” he said.

A perfect example of this can be seen in U.S.-to-Canada cross-border e-commerce. According to Peter Tostevin, vice-president of the healthcare vertical at SCI in Toronto, companies shipping to Canada from the U.S. frequently don’t have warehouse facilities here, and when demand soars they are suddenly scrambling to find space. “They want to localize in the Canadian market for a couple of reasons,” he says. “Their transportation costs have just skyrocketed. They’ve got to shave two, three, four, or five days off their delivery timelines, their in-transit timeline. So we’re seeing a lot of US companies now realizing, ‘we’ve got to set up warehouses in Canada’.”

Physical distancing and work-from-home (WFH) regimes have overhauled the way we think about work. As noted above, warehouse automation is one of the most popular ways companies are adapting to Covid-19 distancing protocols.

But not every operation can be automated, and for those companies a variety of techniques are being used in addition to basics like PPE and disinfection. (For an in-depth look at forktruck safety, see “Lifting clean,” below.) Some examples include adding physical barriers between workstations, staggering shifts to reduce the number of employees on site at any one time, and implementing contact tracking and tracing. Beacons and other devices are being introduced to deliver proximity warnings when employees get too close to each other and at the same time keep track of the contacts made, in case an infection occurs and staff need to quarantine.

At DHL eCommerce Solutions, existing monitoring equipment and the security team conducted contact tracing when an infected employee was in one of its buildings. Amazon introduced a system it calls “Distance Assistant” that uses a camera to track staff as they move about the warehouse, and employs an algorithm to create a video overlay – using red or green circles – that shows whether a safe distance is being maintained. The company recently made the software and AI open source so that anybody with a computer and camera can use it for their own operation.