What mobile robots can do for your operations 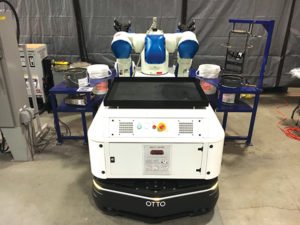 This Otto unit is equipped with robotic arms that let it perform specific tasks without needing human intervention.

Increasingly numbers of warehouse and distribution centre operators and manufacturers are considering adopting automated mobile robots (AMRS) to improve throughput and increase efficiency. This uptake is being driven by the increase in e-commerce caused by the Covid-19 pandemic, along with the accompanying need to ensure physical distance among staff, said a panel of AMR providers convened at the Automate Forward virtual conference, March 26.

“Companies that previously had a five-year automation roadmap are trying to get that same work done in two years,” said Matthew Rendall, CEO and co-founder of Kitchener, Ontario-based Otto Motors.

“It elevates the automation discussion.” Now automation projects are being considered in the C-suite, taking a strategy that was already important and accelerating it, he added.

Rob Sullivan, president of AutoGuide Mobile Robots said companies are looking to robotics as a risk-management strategy. He noted that his company has seen an uptick in interest from potential customers who were adversely affected by the pandemic and want to prevent future downtime. They are looking for AMR fleets to add flexibility to their manufacturing or warehouse operations.

The panel discussed the merits of AMR adoption in existing versus newbuild facilities. Karen Leavitt, chief marketing officer for Locus Robotics said that many of their customers who initially installed a robotics system in an existing facility are now looking at designing new operations around them.

Rendall pointed out that AMRs are very easy to use in existing buildings because they only rely on their onboard sensors and software, so “the constraints that might apply to other tech doesn’t apply for AMRs in a brownfield installation.”

However, typical challenges might be the width of aisles not being sufficient for AMRs and humans to interact. “Old facilities were designed for mode of transport at the time,” he said. With a greenfield facility, it can be designed for the current technology, which means you can fundamentally rethink design from the ground up. “In greenfield you can see ROI off the charts” because it’s totally customized for the robotics. “Where you really start to drive the warehouse of the future is by looking at AMRs as the fundamental mode of transport for the facility,” Rendall said.

Melonee Wise, CEO and founder of Fetch Robotics, said brownfield implementation can be the real sweet spot for AMRs. She shared the example of a customer that is removing all of its static conveyors to recapture 13 percent of its footprint, and will be using AMRs instead. “We shouldn’t give up on brownfield applications,” she said. AMRs provide new options for extending the life of existing facilities, and by continuing their use, companies can really minimize capital expenditures on building new.

While there was an early fear that employees would see robots as coming to take their jobs – the “robot apocalypse” as Leavitt characterized it – that has not come about. In fact, she said workers embrace the robots, noting that the machines do the grunt work – pushing heavy carts around a DC, for example – and allowing the human workers to become more skilled and knowledgeable about the merchandise and processes they work with.

Wise credited the hard work done by AMR vendors to improve the user interface and programmability of their products for making them welcome on the facility floor. She noted that users were initially afraid they wouldn’t be competent to use the robots, so ensuring ease of use has been key to wide acceptance.

Measuring ROI for AMRs is not easy, Wise noted. Success will be measured differently depending on the application, and can range from cycle time reduction to units fulfilled per hour, to reduction of overtime, for example. However, the range for AMRs is typically between six and 18 months, she said.

Leavitt touted the robot as a service (RAAS) model, which her company uses, saying, “it’s a lot easier to get an ‘R’ if there is no ‘I’. In other words, users of Locus roots don’t own them, they are put in place on a rental basis and go back to the manufacturer when no longer needed.

The panelists agreed that one of the next big challenges the AMR industry will need to address is the interoperability of equipment.

Søren Nielsen, president of Mobile Industrial Robots (MIR), said a lot of their customers are looking to be able to integrate fleets from different makers. “Today we don’t have fleet systems that talk to each other,” he said. And while industry associations such as the Mechanical Engineering Industry Association (VDMA) in Europe and the Robotics Industry Association RIA, (which hosted the Automate Forward conference) in North America, are beginning to have discussions about standards, for now it’s a matter or trying to match up with as many different system as possible until a unified approach is decided.

The panel wrapped up with a discussion of the key areas that potential AMR users should discuss with vendors.

Leavitt mentioned the business intelligence that can be gleaned in real time to change operations on the fly, as well as potential for growth. “You want biggest bang for your buck today but make sure your vision for growth will be met by the vendors,” she said.

Wise suggested taking a close look at implementation timelines and costs and what it would take to maintain over the long term.

Rendall noted that it is crucial to engage the vendor in system design. “A good manual process does not necessarily make a good automated process,” he said. “If done properly, you’ll have effective AMRs, but also will get insights into possible bottlenecks that will result from the implementation.”