Yes! We have bananas

Walmart’s brand-new Harmony DC in Cornwall, Ontario ensures stores across Eastern Canada have fresh food, with a special focus on the most popular tropical treat 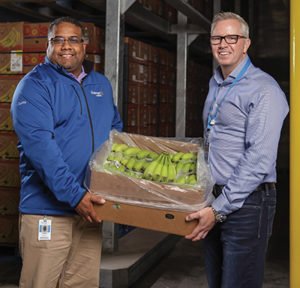 Deep in the heart of Walmart Canada’s giant Harmony DC in Cornwall, Ontario is a large series of vault-like chambers. Inside, thousands of kilograms of bananas are quietly ripening, under tightly controlled atmospheric conditions.

These banana ripening rooms use state-of-the-art technology to ensure that every case of the tropical fruit shipped arrives in stores at precisely the right moment in its lifecycle. And that’s no easy task, says Joe Rupolo, Dole’s ripening and distribution manager for Walmart. Given that the DC ships from Cornwall all the way to Canada’s east coast, the bananas need to be at varying ripeness levels as they are loaded for their journey.

Ensuring the bananas reach stores at the optimal moment also means there is less food waste.

“Not all bananas are the same,” Rupolo says. Coming from different countries, under different conditions, they require close monitoring.

“You are creating a new product” with bananas, he adds. As they ripen they turn latex into sugar, creating heat and gases as byproducts. The ripening rooms blow air across the fruit and control heat, humidity and ethylene gas levels to ensure perfection. 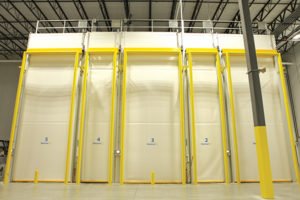 The Walmart DC has five banana chambers that can each contain three truckloads, or about 54,400 kilos. The fruit is palletized and neatly packed into drive-in racking. They began operation this October, and Rupolo has been following the ripened bananas to the stores to verify quality. They’re doing well, he reports.

“Walmart has the tools in place to be the best place to buy bananas in Eastern Canada,” he says.

“It’s one of the most critical items in the store,” adds Drew Robertson, senior director of operations with Walmart Logistics. “We need to make sure the offering is consistent across the region.”

Bananas are by no means the only product this DC is handling. Harmony contains three distinct DC operations under one expansive roof. The bananas are part of the Perishables DC (PDC), which, along with an Import DC (IDC) and High Velocity DC (HVDC), is housed in the former Target Canada building. Walmart bought the two-year-old facility—along with 12 stores—in 2015 when Target gave up its Canadian operations.
The DC serves Walmart stores from Cornwall to the east coast, supporting the company’s push into the fresh grocery market.

The building is large enough that the CN Tower would fit on its side within the perimeter walls. It covers about 1.5 million square feet, and sits on 169 acres. It has more than 200 dock doors, and yard that will accommodate 1,300 trailers.

The facility sits close enough to Walmart’s Regional Distribution Centre (RDC) that with a minor variance the two properties may be joined in the future, Robertson says. It is also only a couple minutes from the 401 via a brand new road that allows trucks easy access. 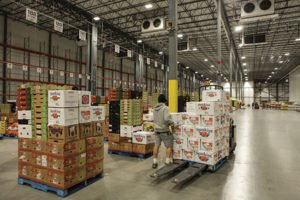 Left: Bananas are joined by other fruits and vegetables as workers prepare outbound pallets in the Perishables DC. (Jason McNamara photo)

When Walmart took over the DC from Target, it was only two years old. But, it’s no surprise that different business would have different needs, and Walmart needed to renovate.

Target only handled general merchandise at the facility, while Walmart handles a wide variety. A 135,000 square-foot freezer was added to the footprint on the east side for the PDC. Now the temperature-controlled area includes the banana rooms, a zone for fruits and hearty vegetables that’s kept at 12C, a cooler at 1C and a freezer at -23C.

Walmart replaced all the racking in the building as well, upgrading for weight and picking style. Robertson notes that Target did quite a lot of single picks, while his operation is focused on case and pallet picks.

Although the building was only two years old, the concrete floor at the main dock doors had to be replaced, a renovation that took place while the import DC was already operational. The building uses LED lighting both inside and out, reducing energy consumption by 74 percent.

The Harmony facility currently sees between 700 and 900 trailer moves each day, with approximately 19,000 trucks passing through the gates every month.

Most of the big Walmart stores get daily deliveries, and the DC operates 24/7 to ensure they are kept stocked with fresh food. The busiest area is in the frozen, dairy and deli (FDD) area, which receives and ships daily. Inbound trucks are unloaded and racks replenished overnight, and outbound loads are built and shipped up until four in the afternoon.

All this depends on the timely arrival and departure of trucks, which is controlled through Walmart’s proprietary yard management and warehouse management systems. But, because of the building’s design, dock space is at a premium.

“Doors are the commodity here,” Robertson says. “Although we have lots, we could always have more.”

The building was designed with doors on one side only, he notes, which is not the way a Walmart DC would be designed if being built from scratch. It means that the same doors must be used for inbound and outbound loads, requiring careful timing. If a truck is late the whole sequence can be disrupted, although it is seldom an issue.

In the HVDC the pace is more restrained. Five thousand SKUs of fast movers like kitty litter and diapers are stored in 40-foot-clear racking or in floor pallet positions.

In the import DC the freight is all conveyable and is shipped three days a week to the regional DC and the Mississauga, Ontario distribution centre.

All this work is accomplished with a staff of 1,400, including both full- and part-time associates. General manager Curtis Brumfield oversees the big picture, with two assistant general managers reporting to him. They, in turn, have 12 operations managers and 30 team leads who keep staff up to date on each day’s requirements.

With the regional DC so close by, Walmart is operating the two facilities as a campus. Brumfield says this helps with the flexibility in staffing, as people can be moved from the regional DC over to the Harmony building as demand requires.

As well, many staff from the RDC were able to move to Harmony when it opened, providing a core of experienced workers that made starting up smoother. 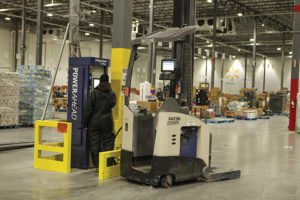 The system is supplied by PlugPower, which has been working with Walmart to work out some issues that arose with operations in the freezer area. According to Robertson, an upgraded motherboard has reduced the instances of the units timing out in the cold.

Associates use Vocollect voice recognition units for picking. At the moment these are the original wired units, although Robertson notes the company is working on an upgrade to Bluetooth headsets with the transmitting unit attached to the mobile equipment. Tests have shown that the Bluetooth units provide better voice recognition and clearer sound, he says. 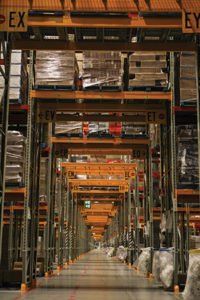 A little perspective—the Harmony facility is big enough that the CN Tower could fit, on its side, within the building. (Jason McNamara photo)

Expansion is definitely in the cards. “As we grow the pain point will definitely be recruiting,” Robertson says, noting that they are hiring an additional 100 associates now. He adds that Cornwall is an attractive location with a burgeoning urban scene, while still maintaining its small-town charm. The company hopes to be able to attract some former Sears Canada employees out of Brockville, Ontario, just 100 kilometres down the 401 highway.

Staff can be moved around within Harmony, as well as to or from the RDC next door, and if business needs change the allocation of space between the HVDC and IDC can change. In fact, Robertson points out that the racking is labeled running in opposite directions in the two spaces so if they need to expand they can do so without having to re-label every rack.

And while Walmart is exploring automation in other areas, Robertson says the Harmony DC is not a likely candidate. Down the road, AGVs could be brought into play, but because the DC is critical to ensuring the fresh food needs of eastern Canada are met, Walmart will continue to count on reliable human beings for its day-to-day picking and replenishment operations.

Operating three DCs under one roof has no drawbacks, Robertson notes. Brumfield agrees: “It’s beneficial to have everything in one place,” he adds.

It’s called Harmony because “we have to work three different facilities in one,” Robertson concludes. “And with the campus environment we have enough assets to be make it all work seamlessly.”