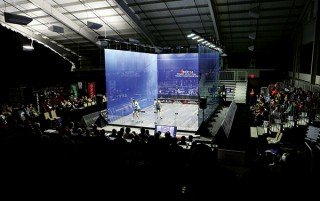 The court was used in Niagara-on-the-Lake for the Women's World Team Squash Championship before being moved to Toronto for the 2015 PanAm games.

As the official logistics supplier to the PanAm Games coming to Toronto this summer, Schenker of Canada Limited has made a few interesting moves.

Among them, this glass squash court, which will be centre-stage in the Direct Energy Centre, one of five competition venues at Exhibition Place. It converts from singles to doubles play and is the only one of its kind in the world.

The court comprises 91 glass panels, a steel frame, aluminum brackets and a double wooden floor, and weighs between 13,750 and 14,250 kilograms, depending on the configuration.

After being stored at Schenker’s warehouse it will be assembled over six or seven days at the Direct Energy Centre. It requires the use of forklifts, and pallet trucks to unload the pieces, and scissor lifts to complete the assembly.

Once assembled, the court is used in a darkened venue, with lighting only over the playing area. This prevents the players from being able to see out, but allows the spectators to see all the action.

This feat is made possible through the use of glass that is printed with two layers of dots. A layer of dark dots and a layer of bright dots combine to create an optical illusion that prevents those inside from seeing out and allows those outside to see in.

Squash is expected to be exciting in Toronto; Canadian players have won a gold in every PanAm Games to date.