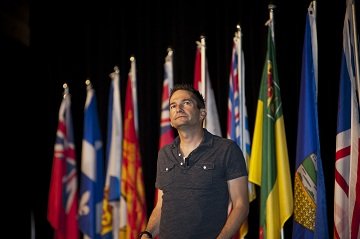 Whistler, BC: “Don’t stop until you are on your hands and knees.”

Ray Zahab walked, ran and crawled his way to the finish line of the Yukon Arctic Ultra, a 160-km adventure race in the winter of 2004 by reciting this mantra. Halfway through the race he was ready to quit; woefully unprepared, with poor equipment and only a couple months of training, he thought he had reached his limit.

But he had an epiphany: since he had this opportunity to see how far he could go he needed to see it through. So he got up again and plowed on through the snowy cold night until the finish line appeared in front of him.

To his great surprise this self-professed non-runner had won the race.

Zahab shared his stories as the keynote speaker at the PMAC national conference, Reaching New Peaks, in Whistler, BC today. Going from a pack-a-day smoker whose only exercise was going to the fridge to get a “Guinness colder than the one I was drinking” to an ultramarathoner was a long journey for Zahab.

Reaching his 30th birthday he realized that he had no direction in his life, and decided he needed to make a change. He committed first to quitting smoking and started hanging out with his brother who is an athlete. Shortly after he quit smoking, they went ice climbing, and Ray made it to the top – his Everest, he calls it – and “never went inside again.” He had discovered adrenalin and that he had the ability to do endurance sports.

A non-runner, he decided to try the Yukon Arctic Ultra after reading an article about it in a magazine. He completed the self-supported race with a cheap plastic toboggan and only realized he had won it after reaching the finish line.

The experience was empowering and Zahab has not looked back. He moved on to ultramarathons around the world, and completed a 7,500 km run across the Sahara in 111 days in 2006. A documentary, Running the Sahara, details the trials and tribulations of the expedition.

Now Zahab is occupied with his charity, impossible2possible (i2p), that aims to inspire, educate and empower young people through the landscape of adventure. The organization takes young “ambassadors” on adventure trips around the world, and integrates their experiences into real-time learning for students back in the classroom.

“It’s about believing in yourself,” Zahab says. “It applies to everyone in this room. We totally underestimate what we are capable of doing as human beings. We are oftenour own worst enemies, but trust me, it’s true: We are all capable of the extraordinary.”

Instead of speaker gifts, a donation is being made to the charity by PMAC.