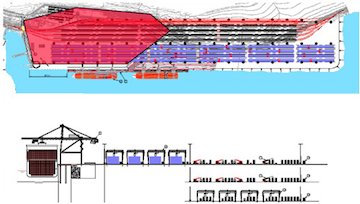 Federal environment minster Peter Kent announced that the Phase II Expansion Project is “environmentally sound” and “is not likely to cause significant adverse environmental effects with the implementation of the mitigation measures described in the Comprehensive Study Report”.

The Comprehensive Study Report is a 200 page document issued pursuant to the Canadian Environmental Assessment Act and published in September 2012. It examines how the construction and existence of the terminal expansion will affect environmental factors such as air quality, noise vibration, light, vegetation resources, wildlife and wildlife habitat, avifauna (birds and migratory flight patterns), freshwater resources and ecosystems, marine environment, socio-economic conditions of the local human population, human health and safety, archaeological and heritage resources, current use by aboriginal people and country foods (resources include vegetation, wildlife, freshwater and marine species that may be used by local subsistence or recreational harvesters).

Some of the recommendations for mitigation measures include:

After giving the plan approval from his department, Kent referred the project back to the departments of Fisheries and Oceans Canada, Environment Canada and the Canadian Transportation Agency for appropriate follow-up action.

Under the Fairview Terminal Phase II expansion project, the terminal’s existing wharf structure will be extended to a length of 800m (with a minimum water depth of 18m) and the dock area will be increased to 56 hectares. The onshore terminal will also be expanded.

As well, CN Rail intends to build two rail sidings, a maintenance road and a wye (a triangular shaped arrangement of railway tracks with a switch point at each corner). The intermodal yard will have 9,144m of trackage with a capacity of 400 TEUs.

The expansion is expected to increase the handling capacity of the facility to at least two million TEUs per year with storage for 28,560 TEUs at stacked five high. The terminal will use at least six (and possibly up to eight) post-panamax cranes and will have four radiation ports.

The project is estimated to cost $650 million and is scheduled to be completed in 2014.