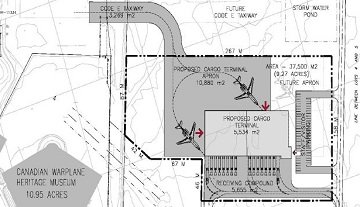 HAMILTON, Ontario—Moving goods through the airport in Hamilton, Ontario is about to get easier.

A major construction project was announced today for the John Munro Hamilton International Airport. A 5,575sqm (60,000sqf) cross-dock is being built at the airport. The facility will include:

The cost of the project is expected to be $12 million. Public funding from the federal government and Ontario provincial government will account for $8 million—$4 million each. The rest will come from TradePort International Corp, the management body responsible for the airport. Representatives from all levels of government were at the airport for the announcement. The federal representative was labour minister Lisa Raitt. Minister of infrastructure and and transportation, Bob Chiarelli, represented the Ontario provincial government. Local Hamilton politicians were also part of the ceremony.

“The airport is a city-owned asset that has seen huge growth in cargo operations in recent years,” said Bob Bratina, mayor of the City of Hamilton. “This strategic investment will allow the airport to continue to develop Hamilton’s air cargo business, providing more economic benefits to the city and region.”

According to Raitt, “Hamilton International Airport is a growing gateway for international trade and this new cargo facility will help the region’s economy remain competitive and well-positioned for the future.”

Chiarelli also spoke about the the role the facility plays.

“Hamilton International Airport serves as an international gateway to south-western Ontario, so our government is very pleased to be able to support its improvement,” he said.

Frank Scremin, president of the Hamilton International Airport said the construction project is important to the future development of the airport’s commercial traffic.

“I am thrilled with today’s investment by the provincial and federal governments,” he said. “It recognizes the importance of Hamilton as a transportation gateway at both a provincial and national level. We are very proud to have one of the strongest domestic air cargo distribution networks in Canada; this facility will provide an opportunity to expand upon existing business by allowing a greater variety of goods to be moved through the Airport.”

Construction of the cross-dock will create 50 temporary jobs. Airport management expects approximately 400 jobs to be created once the facility is open and operating, although some of those positions will be created by what airport officials deem as “indirect economic activity”.