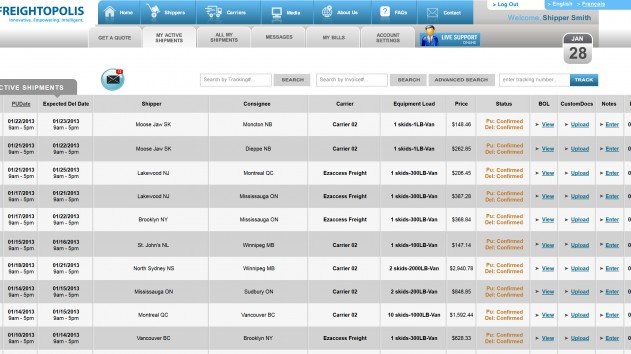 MONTREAL, Quebec—A new freight brokering businesses is slowly ramping up operations as it readies itself for a full launch at the end of April.

Freightopolis.com is an online service that promises to eliminate the middleman freight broker, according to founder and president Jack Pollak.

Pollak, who also runs EZ Access Freight Brokers, says his experience in the business convinced him there was a better way of booking freight.

“As a freight broker, you’re the person between the carrier and the shipper. You get on the phone and you call for shippers all day looking for quotes. They get about five of these calls a day. They get inundated.

“Every single time you go for a quote, you call ten carriers, they have to call you back. Then you have to say sorry you’re too high. Then they finally take it but then you’ve got to track it for them and deal with all the issues. I said it could be more efficient.”

Pollak decided to translate his experience as a consumer into his business model.

“I said the airline industry came up with a way. They have Expedia. They have a whole bunch of companies like that. There is some way to be able to get the information. I started working from there. I said there needs to be a database everyone works on—if you run full loads, partial loads, LTLs, whatever you need.”

The Freightopolis system allows carriers to enter as much information as possible about their operations: lanes travelled, type of cargo hauled, load types and rates. Shippers will then be able to search for services that match their shipping needs. Once they find a service that matches their requirements, the shippers can book their load with the carrier. The process is all done online.

Once the load has been booked, the Freightopolis system begins to automatically track it. Notices are sent out to shippers and carriers detailing the entire process including inventory lists, dates and times when pick-ups are expected, and delivery completion notifications. The system also automatically handles the billing and payment process.

In case there is a problem with a shipment that can’t be resolved through the system, Pollak says he will have customer service staff available by phone to answer any questions and smooth out any issues.

The system is free for carriers, who will also be able to use the cloud-based service as a freight management program. Shippers will be charged 10 percent of the total cost of the shipping service to book freight, although they won’t see that charge come up as an individualized item. When a rate is presented to the shipper it is the final, total, aggregated charge, including fuel surcharges, taxes, hand bombing fees, etc.

The system is built using PHP code on top of a MySQL database. It is hosted on two geographically separated RackSpace servers, hosted in the US.

Pollak came up with the concept in 2010 and hired a development company to start programming in February 2011. Once the system was built, Freightopolis began approaching carriers in 2012 to sign up with the service. Currently he says there are 50 carriers actively participating in the pilot project and 170 committed to participating once the system is in full operation. Originally 10 shippers agreed to participate and Pollak says there are plans to add approximately 10 more every week during the soft launch phase. After that Freightopolis intends to target shippers much more aggressively.

While the basic functionality is there, Pollak says he’s not finished adding features and capabilities. Once enough data is gathered, a carrier rating system will be deployed. It will take information gathered by the system including missed deliveries, cancelled orders, and late pick-ups, and use that information to rate the carriers. He says this will give shipper another tool to use when deciding which carrier to choose as a business partner. Another plan is to add eManifest functionality.

“Right now the shipper uploads his Customs documents. Then the carrier can print the documents wherever he is, put his PAPS number on and fax it out. That’s the way the system is set up currently. Ultimately the goal is to bring in some Customs brokers and [transmit the information electronically to CBSA].”

Larry Franch, vice-president of Bestway Cartage Ltd, in Mississauga, Ontario, says he likes the idea of having a data-based carrier rating system added to Freightopolis, as he feels customers understand how much good service is worth.

“There’s a cost to good service, and I think shippers are starting to realize that now, and the lowest rate will usually cost you more. It will save you upfront but cost you more in the end. Service has a definite cost and so does cheap service.”

Franch has been with Freightopolis since its inception and so far he is very pleased with the service. He has even picked up a new client.

“I’ve never moved this for this shipper. It would seem to be a new opportunity. It’s having access to some shippers who didn’t know about BestWay or didn’t realize that BestWay did those types of moves. We haul hazardous material as well so there might be some shippers out there that didn’t know we did that, so perhaps that might showcase some of our abilities as well to people who didn’t have prior knowledge about BestWay,” says Franch.

“So far everything went very seamlessly. All the information was presented for me. As their system requires us to do, I entered the dispatch time, the actual pick-up time, the dispatch time for the delivery, the actual delivery time. All the information was correct and accurate. So far so good. It’s too early to say I got paid yet, but I’m hoping.”