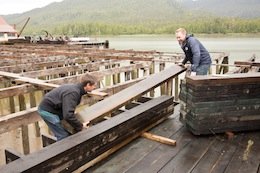 With the contribution of $200,000, the Port Edward Historical Society will launch a 20,000-square foot restoration of the Working Dock at North Pacific Cannery, the oldest remaining intact salmon cannery on the West Coast of North America. The project is the final piece of an intensive five-year restoration effort with a budget of $2.3 million dedicated to preserving North Pacific Cannery’s 29 heritage buildings and structures.

“As a Parks Canada-designated National Historic Site, North Pacific Cannery commemorates the role of the fishing industry in the economic and cultural development of not only northwestern BC, but of Canada,” said Don Krusel, president and CEO of the Prince Rupert Port Authority. “It is a reflection of the wide-ranging benefits of today’s port activity, which extend from our region to across the nation.”

Ken Veldman, Director of Public Affairs with the Prince Rupert Port Authority, made the announcement on Saturday at the opening ceremonies of the Cannery’s 125th anniversary celebration. “This restoration project preserves an important heritage site for future generations, creates local jobs and skills training opportunities, boosts tourism through an improved visitor experience, and increases the capacity for North Pacific Cannery to host large community functions and special events,” said Veldman. “For all these reasons, PRPA is proud to partner with the many other businesses and community groups contributing to this legacy.”

Owned by the District of Port Edward, the 18 hectare site has sustained significant wear and tear since it was constructed in 1889. Extreme weather conditions and age have all contributed to the degradation of 29 buildings and supporting infrastructure, much of which has been repaired or restored through various projects since 2009.

“The completion of the Working Dock will finalize all of the large and urgent industrial intervention on the site and allow us to transition from reactive to proactive conservation and planning,” said Steve Milum, Project Manager at North Pacific Cannery. “For years, many spaces on site were deemed unsafe for public use. Thanks to our funding partners like PRPA, we will soon expand guest capacity at NPC from 250 to over 800, allowing us the respond to growing opportunities as a destination for tourists and community events.”

Representing the factory operations and employee living quarters of a multi-ethnic workforce, North Pacific Cannery has become an important institution for the preservation and cultivation of the identity and culture of the people of the Skeena and North Coast region.

Many members of the local community today are former Cannery workers, descended from cannery workers, or even born in the NPC village. The Port Edward Historical Society has also recognized NPC’s significance on a national and global scale, and has begun the process of having the site designated a UNESCO World Heritage Site.