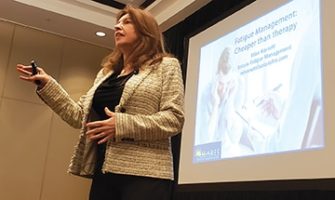 Mike Harnett says night shift workers shouldn’t be on the job for more than 10 hours a day. (Stephanie Wallcraft photo)

Employers who make an effort to understand the sleep needs of workers, particularly those who perform shift or night work, can see significant improvements in safety and performance outcomes, says Mike Harnett, president of Solaris Fatigue Management.

Harnett, who presented on the topic of Fatigue Management: Cheaper than Therapy at the WSPS 2019 Partners in Prevention Conference, explained that human body clocks are unable to ever truly adjust to unconventional work schedules due to factors such as our biological responses to sunlight and darkness.

“If you’re on a daytime schedule, you can put in probably 12 hours of work if it’s not overly demanding,” she said. “If you work a night schedule, ideally we would want you to work no more than 10 hours.

“(Employers) have to understand that there’s going to be more inherent risk on the night shift because you don’t get enough recuperative time.”

Workers should work no more than 12 hours in a 24-hour period and 60 hours in a seven-day period, Harnett said, and those who do are more likely to make critical errors due to the cognitive impairment that accompanies fatigue. This can have effects such as a loss of situational awareness, more time spent on tasks, lowered risk assessment abilities, flawed logic, hindered visual perception, reduced reaction time, and more.

What’s worse, Harnett said, is that fatigue-related incidents are often attributed to human error without further investigation.
“So many companies don’t know if they have a fatigue problem because they haven’t been looking for fatigue metrics,” Harnett said. “But what they have been doing is going, oh, he turned off a valve, but he didn’t turn it back on: human error.

On top of examining work hours, Harnett said that shift and night workers may find that programmable sun lamps that produce UVB rays can often be of help and that employers should consider offering support for them in benefit programs.

“What that’s going to do is give you the sunlight that you need to produce serotonin in your body, which can then be made into melatonin later on and help you sleep better,” she said.

“If you give access to these types of devices, if it’s included in the benefits program, it’s going to be a great help.”