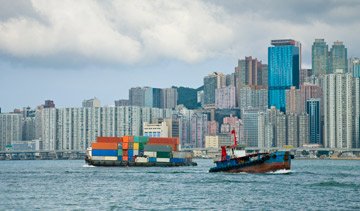 HONG KONG, China—Hong Kong dockworkers briefly blocked a road on Thursday, April 25 and refused to stop camping out at a tower owned by the city’s richest man, as their bitter strike looked set to drag into a second month.

About 300 striking workers, members of the Union of Hong Kong Dockers (UHKD), protested by walking slowly on the road in front of the Asian financial hub’s container ports. The protest lasted several hours and left trucks backed up for several kilometres.

The workers have been on strike since the end of March. They are demanding higher pay and better working conditions from the middleman companies supplying labour to port operator Hongkong International Terminals, controlled by billionaire Li Ka-shing.

The workers also ignored a demand to leave their camp in front of Li’s skyscraper headquarters by noon, under threat of legal action. They’ve been sleeping in tents outside the Cheung Kong Center in the city’s financial district for about a week as they press their demands.

The dockworkers have put up signs depicting Li as a devil and accusing his company of exploiting workers. Li, whose conglomerate Hutchison Whampoa controls Hongkong International Terminals, is worth $31 billion, according to Forbes, making him Asia’s richest person.

Hong Kong’s port is one of the world’s busiest and the strike has slowed shipments of toys, clothes and shoes moving from factories in mainland China to overseas markets. Japanese shipping company Mitsui OSK Lines said Thursday a Jakarta-bound vessel was delayed due to the strike.

Legislator and union leader Lee Cheuk-yan said the strikers decided to block the road in response to “lies put forward” by Hongkong International Terminals about their working conditions.

“Our purpose is not to affect the truck drivers. We are just there to protest,” Lee said. “But of course there may be collateral damage.”

Lee said the protesters wanted to dispute newspaper ads taken out this week by the port operator that said the workers have enough time to rest, eat lunch and go to the bathroom. Operators of the giant gantry cranes moving containers on and off ships have complained that they have to eat and relieve themselves inside their crew cabins.

The workers want a 20 percent pay hike to make up for pay cuts in previous years. The subcontractors are offering raises of just five to seven percent.

Hutchison operates 12 berths at four of Hong Kong’s nine container terminals and two others with a partner.