Presented in partnership with BDO and SCMA

To see where you stack up, visit MM&D’s online salary calculator.

Salaries are up this year, and so is the gender gap.

In 2014 we reported that salaries had dropped by about one percent. This year we see an increase of 5.8 percent in the overall average salary. 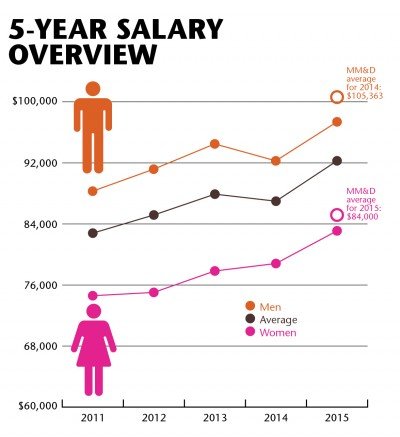 Women are still behind in the salary sweepstakes.  Looking at the difference between their wages and their male counterparts, the gap widened this year by a half a percent to 17.5 percent. It’s still an improvement over 2011 through 2013, but it’s shift in the wrong direction. 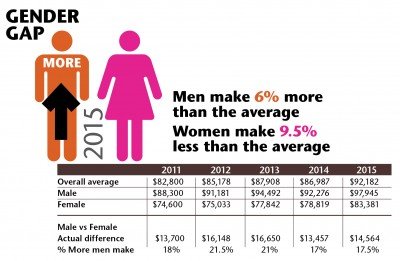 When we look at salaries correlated against both sex and length of time in the industry, however, there is some light at the end of the tunnel. For women with 11 to 15 years of experience, the gap narrowed this year to less than $400. Last year that same gap was $9,000.

While the women in those groups have a little bit to cheer about, it’s still something of a black eye for the industry that the average gender gap remains in the double digits.

What’s on your mind
As part of the survey each year we ask respondents a number of questions about their impressions of the job market and working conditions. 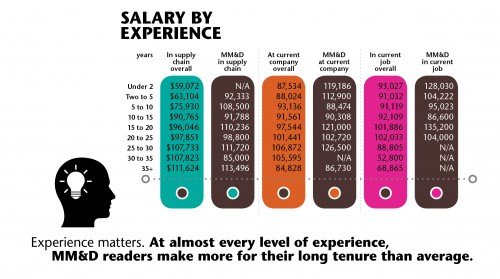 This year we find a continuing trend of declining optimism about the number of supply chain jobs in Canada. Last year 65 percent believed there were more jobs available than before; this year that number has dropped to 61 percent. That lost four percent moved directly to the other end of the spectrum, where the number who said jobs have declined jumped from 11 to 14 percent. There’s also a big gap here between SCMA members and the general supply chain population, with 65 percent of members seeing more jobs, while only 54 percent of non-members were that optimistic.

We also see a consistent level of job change for those employed in logistics, warehousing and inventory control positions, with 56 percent noting a significant change in their job over the past three years. 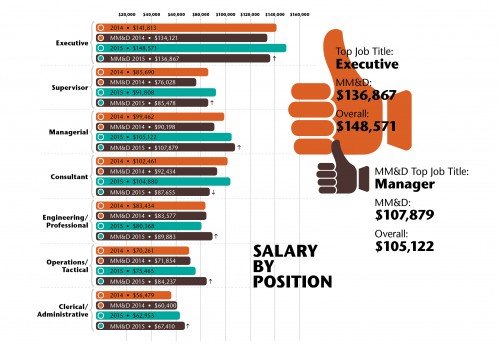 Also holding steady over the years we’ve been asking the question is respondents’ impression of their influence, and need for it, at the C-level. Forty-three percent say they have it, 27 percent want more and 20 percent don’t need or want it. Last year those numbers were 42, 27 and 23 percent, respectively.

Perhaps in keeping with this year’s salary increases, we see a corresponding increase in those who believe their salary has kept pace with increasing responsibility on the job. Sixty-three percent say the two are in sync, versus 60 percent last year, while 37 percent say the two don’t match up, versus 40 percent in 2014.

Changing jobs
Fewer people seem to be expecting to change jobs this year, with the number saying they will stay put increasing by four percent from 34 to 38.

For those who do plan a move, however, there has been a big shift in the rationale. Last year 59 percent said they would move because of lack of opportunity in their current position. This year that’s dropped to 57 percent, but the number who say they’ll move because they need a change has jumped from 39 percent to 53 percent. 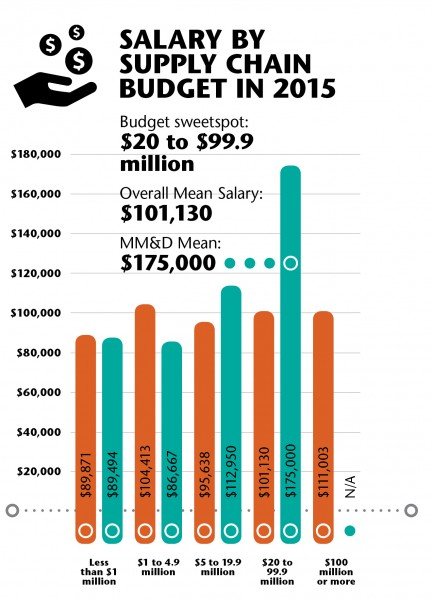 Also startling is the drop from 54 percent to 47 percent in the number who would move for more compensation. And down by five percent is the group who would switch jobs because of management’s lack of appreciation for supply chain roles.

Job satisfaction is improving. We specifically asked about this, getting respondents to rate the important of factors like salary, work-life balance, support for professional development, benefits, opportunities for advancement and performance recognition, relations with co-workers, and corporate social responsibility. In each of those areas, the satisfaction level increased from 2014 to 2015. Overall satisfaction climbed by a point from 88 to 89 percent. 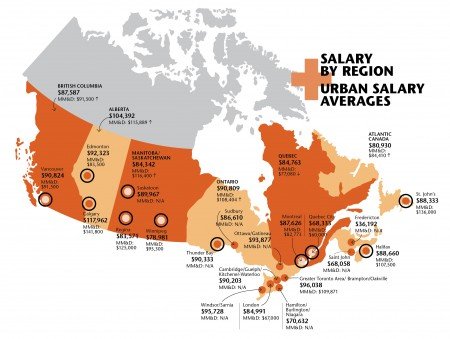 Looking at salaries, Western Canada once again tops the charts. MM&D’s top pay packets are in Manitoba-Saskatchewan this year, edging Alberta out by less than $1,000 on the average. Across the board, it’s Alberta at the top with an average annual wage of $104,392. That’s 12.4 percent over the national mean.

Where you work
Natural resources industries continue to deliver top dollar. The trend has continued over the past six years, and this year the average salary is $104,231. That’s another 12.3 percent premium over the national average.

For MM&D readers service industry jobs are the most lucrative, with an average of $102,641. That’s 10.7 percent better than the national average. And if we break out the industry categories grouped under service we find that transportation/warehousing jobs are the best of the bunch, with an average of $104,388, or 12.4 percent better than the overall mean.

Looking ahead
Salaries this year have increased well. Supply chain workers are increasingly satisfied with their wages and their working conditions. It would appear that the long hangover from the great 2008 recession has finally dissipated.

But with Canada in the throes of a technical recession as we head for 2016, we will be watching the potential effects in next year’s survey results. Will uncertainty once again creep into the job market and  be reflected in stagnant salaries and satisfaction? We hope not.

To see where you stack up, visit MM&D’s online salary calculator.

Brought to you by our survey partners:

BDO has extensive experience working with a range of clients in the traditional and emerging areas of distribution, providing us with firsthand knowledge of trends and insights. We understand your business. Our international network of industry professionals has a wide range of financial and advisory expertise to support your changing needs.

As the leading and largest association in Canada for professionals in supply chain management, the Supply Chain Management Association (SCMA) is the national voice for advancing and promoting the profession. SCMA strives to ensure that employers recognize the critical contribution that SCM professionals make to the success of their organizations. SCMA sets the standard of excellence for professional skills, knowledge and integrity. With nearly 8000 members working across the private and public sectors, SCMA is the principal source of supply chain training, education and professional development in the country.