December 3, 2018
by Inside Logistics Online Staff

December 3, 2018
by Inside Logistics Online Staff

Kinedyne‘s vice-president of sales and marketing Paul Wolford has died. “It is with the greatest sadness we share that Paul Wolford, our esteemed colleague and trusted friend, passed away Thursday, November 15, 2018,” Dan Schlotterbeck, president of Kinedyne LLC, said. “Paul’s courage, strength and dignity through his long battle with cancer are a testament to his dedication and devotion to all who knew him. He led by example, and his many contributions, as a person and as a leader, touched each of us.” Wolford’s career in the commercial vehicle industry spanned nearly 40 years. He joined Kinedyne in 1981 and was named the company’s vice-president of sales and marketing in 1997. 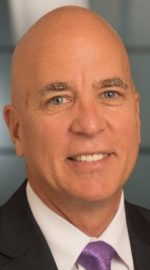 Tim Strauss has joined Drone Delivery Canada‘s advisory board. Strauss currently serves as vice-president of cargo for Air Canada. He has more than 31 years of cargo experience in both the airline and freight forwarding industries. Before joining Air Canada, Strauss held leadership roles in global sales and operations at Northwest Airlines, Delta Air Lines and in Hawaiian Airlines. He began his career with Emery Worldwide in 1987 (now UPS Supply Chain Logistics) where he started as a cargo handler and completed his tenure as vice-president of transportation and logistics.

KION Group‘s subsidiary Dematic has appointed Gabrial Diab as executive vice-president and CFO with immediate effect. He will succeed Frank Herzog, who leaves the company after six years within KION Group to relocate to Europe and pursue new career opportunities. Diab joins Dematic from French automotive supplier Valeo, where he was managing director of the North American Thermal Front End Business since 2016. Previously he spent almost five years as CFO, North America, at Valeo, during which time he was also the interim leader for purchasing. Before moving to Valeo, Diab held various international leadership and finance roles at companies including Ford Motor Company, Fluor, Textron, and Lafarge. He holds a Bachelor of Science and a Bachelor of Commerce degree as well as an MBA from the University of Windsor in Ontario.

Hal Lawton has been elected to Sealed Air Corporation‘s board of directors as an independent director, effective January 1, 2019. Lawton currently serves as president of Macy’s. Previously, Lawton oversaw all aspects of eBay’s Americas business unit. Before that, he spent 10 years at Home Depot and five years at McKinsey & Company. Lawton holds a bachelor’s degree in chemical engineering and earned an MBA from the University of Virginia’s Darden School of Business.