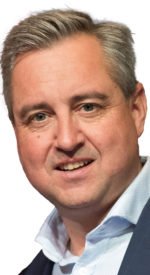 The Railway Association of Canada (RAC) has appointed Marc Brazeau as its new president and CEO. He will begin his duties on July 3, 2018. Brazeau succeeds Michael Bourque who filled the role from April 2012 to November 2017. The Board of Directors wishes to thank Gérald Gauthier for having assumed the leadership of the RAC during an interim period from November 2017 to date. Brazeau joins RAC from automotive paint and products distributor Uni-Select, where he was vice-president of sales and marketing since May 2015. He has more than two decades of transportation industry association experience. Between 1995 and 2015, he worked for the Automotive Industries Association of Canada (AIA), where he spent more than seven years as president and CEO. Brazeau holds the Certified Association Executive (CAE) designation.

Donald Barnes has been appointed as interim president and CEO of Marine Atlantic for a term of one year, or until a new president and CEO is announced. Barnes holds an MBA and a Bachelor’s degree in psychology. He has been vice-president of customer experience at Marine Atlantic Inc. since 2009. He has also occupied various senior executive positions in the last 30 years, notably in the fields of services management, organizational transformation and business strategy.

Jonathan Lefcourt is the new president and CEO of Alliance Shippers Inc. He brings more than 34 years of experience in the industry to the role. Son of the late Ronald Lefcourt, the company’s co-founder, Jonathan joined Alliance Shippers after graduating college. For the past 25 years, Lefcourt served as vice-president of information technology. Lefcourt’s extensive experience in transportation and logistics began as a teenager on the loading docks at Selective Transportation. Throughout his tenure with Alliance Shippers Inc., Lefcourt has gained greater responsibility and deeper understanding of customer relations, inventory management, supply chain warehousing and consolidation, and information technologies. He graduated summa cum laude from Fairleigh Dickinson University with a Bachelor of Science degree in accounting.