by Inside Logistics Online Staff April 29, 2019 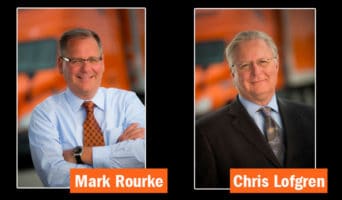 Chris Lofgren has retired as president and CEO of Schneider National, Inc. The Schneider board of directors has selected Mark Rourke, executive vice-president and chief operating officer, to succeed Lofgren and become the company’s fourth president and CEO in its 84-year history. Rourke began his career with Schneider in 1987, at the company’s Seville, Ohio, operating centre. Over his 30+ year tenure with Schneider, he has held a variety of leadership roles, including director of driver training, vice-president of customer service, general manager of Schneider Transportation Management and president of truckload services. Lofgren was CEO for 17 years. He led the successful transformation of Schneider from a family-led organization to a professional, independently managed enterprise. He  played an integral role on the team that led the company through its successful initial public offering in April 2017.

Art Garcia, executive vice-president and CFO, will retire from Ryder System, Inc. on April 30, 2019. Garcia has had a 20-year career with Ryder and has been in the role of CFO since 2010. Garcia joined Ryder in December 1997. Prior to his role as CFO, he held several positions with increasing levels of responsibility in corporate accounting, including senior vice-president and controller.

Drone Delivery Canada Corp. has appointed Spencer Todd and Duncan Card to the board of directors. Todd is an analyst in the Technology Consulting practice at Deloitte, specifically working within the Digital Studio (D Studio). He holds a Bachelor of Commerce in Business Technology Management from the Ted Rogers School of Management – Ryerson University in Toronto, Ontario. Card is a senior partner at the law firm of Bennett Jones LLP, where he co-chairs the technology law practice and chairs its government contracting, procurement and intelligent infrastructure practices from that firm’s Toronto and Ottawa offices.   These appointments increase the size of the Drone Delivery Canada board to six directors.