August 2, 2021
by Inside Logistics Online Staff

August 2, 2021
by Inside Logistics Online Staff 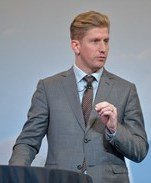 The International Air Transport Association (IATA) has appointed Brendan Sullivan global head of cargo. Sullivan has worked in air cargo for 20 years including spending 14 years at IATA. Since January, he has been acting global head of cargo alongside his role as head of cargo operations and e-commerce. A Canadian, Sullivan began his career in air cargo at Air Canada in 2000, where he gained frontline operational experience and developed expertise in dangerous goods handling that facilitated his transition to IATA in 2007. He is fluent in English and French.

Mullen Group Ltd. has appointed Jamil Murji as a new director of the Corporation effective July 27, 2021.  Murji was the president and CEO of Inter-Urban Delivery Service Ltd. and Argus Carriers Ltd. prior to these companies being acquired by Mullen Group on July 1, 2019. He has an undergraduate degree in Computer Science from Simon Fraser University and an MBA from Western University’s Richard Ivey School of Business.

Airspace has announced Saad Shahzad as its new chief revenue officer (CRO). He joins Airspace with 15 years of experience across investment banking, venture capital, and operating roles. He started his career in investment banking at Goldman Sachs, and later served as an Associate at Norwest Venture Partners. Most recently, Shahzad was general manager, enterprise solutions at Clutter, a logistics provider. Previuosly, he was head of sales at Gusto.

Niklas Kirwel has been appointed CEO of the New York-based SCM software provider Setlog Corp. Setlog co-founder Ralf Duester, who has led the successful development and expansion of Setlog’s North American business over the past ten years, will simultaneously join the board of directors as chairman. Kirwel, who previously worked for Setlog in Europe and the U.S. from 2006 to 2018, reports to the board of Directors in New York and the executive board of Setlog AG at the headquarters in Bochum, Germany. Kirwel started his career at Setlog in 2006 as customer relationship manager. After internal promotion, he was responsible for the European and North American markets as vice-president product (USA) and managing director EMEA from 2013. In 2018, he moved to London and worked for two of the leading software-as-a-service specialists in the UK. Most recently, he was head of solutions portfolio management, pricing and innovations at Unicepta in Cologne.