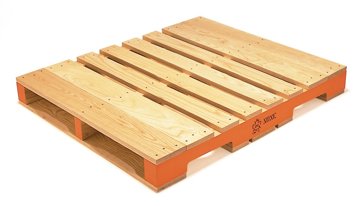 As president and CEO of the Canadian Pallet Council (CPC), Belinda Junkin has the duty to promote the organization’s new ECT (electronic container transfer) software, but even without that responsibility she would still be excited about the concept behind the tool.

“It’s the fact the environmental focus has been on equipment and transportation. This is now talking about leveraging technology and data to be more efficient,” she said. “Rather than changing truck motors or putting skirts on trailers, this is actually not moving loads, or reducing mileage, so to me this is a game changer.”
ECT is an algorithm that works with the CPC’s pallet and container tracking tool CTSWEB. Junkin describes it as sitting on top of the main piece of software and working in the background to automatically come up with trades that reduce or eliminate the need to move pallets.

“It looks for opportunities to trade pallet imbalances like electronic banking rather than physically moving the pallets. And it might even be with partners you don’t know or use. It’s just looking geographically: What’s the shortest way to reconcile these balances? It’s not physically moving the pallets, it’s electronically adjusting balances.
“And for the non-movement of goods we will create a carbon offset. We will calculate the amount of carbon saved by the non-movement of the truck, then in the future we will be able to validate that. That’s a future opportunity for us to be able to monetize that.”

While that may seem a bit complicated, according to Junkin, it’s really very simple in operation.
“If you make a triangle on a piece of paper, A is Toronto, B is Halifax and C is Vancouver. If A owes B 1,000 pallets and B owes C 1,000 pallets and C owes A 1,000 pallets, each of those are operating in isolation. They don’t see the other parties.

“ECT is going to sit on top of that and say: A if you flip those arrows the other way and everybody adjust their balances by 1,000, everyone’s balances are reduced by 1,000 owing and no pallets physically move down the road.
“The other type of ECT is where if you create two points on a piece of paper, you have Vancouver on one side and Toronto on the other. You’ve got people in Toronto shipping to Vancouver. You’ve got people in Vancouver shipping into Toronto. Both those people are back-hauling empty pallets—those trucks are actually passing on the road potentially. If they both flip pallets—say the Toronto shipper picks up from the Vancouver shipper’s receiving point, they can pick up pallets locally instead of doing that 3,000km. So it is going to find shorter distances as well as eliminate moves. You might not be able to always eliminate but you might be able to send a truck 50km in the Toronto area, or 100km versus 3,000km to send it out to Vancouver and bring those back.”

ECT works on an opt-in approach. When a user logs in, if there is a possible transfer situation a notification appears. The company is under no obligation to participate in the balance offset, and is able to decline any offer.
The software, which has been in the beta testing stage for the past couple of years, was created with the financial support of the not-for-profit agency Sustainable Development Technology Canada, which gave the CPC a grant for $1.25 million to cover the development costs.