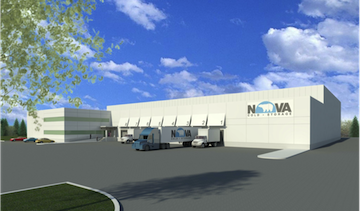 The 60,000sqf building which has eight dock doors, 38ft ceilings and approximately 5,500 pallet positions, is located in the Halifax Gateway Logistics Park, and is the first of the company’s locations built outside the nearby Burnside Industrial Park. It’s also the first greenfield build for the company (Nova Cold’s other two locations were retrofits) so it means the company could create exactly the building and features it really wanted, said Barry Smith, president and owner of Nova Cold.

A big part of what Smith likes is what the building will mean for the company’s potential growth.

“We’ve got a 50ft-deep dock, which makes a big difference in being able to do transload service, which is a big part of being in the port.”

As well the design of the dock doors will mean the company can guarantee that food—especially frozen shipments—are handled in a completely controlled manner.

“We have a refrigerated dock. Our doors are unique in that the trucks back in closed, the doors open into the building so the product isn’t exposed to external temperatures and is transferred within the controlled temperature of the dock. There is no point where it is outside of our control. So the containers are sealed in the door. So exporters don’t have to worry about a container sitting waiting for a truck to pick it up. We can close it inside and seal it.”

The building has also been designed with people in mind. In particular, Smith says truck drivers were given a lot of consideration during the building’s planning stages.

“We’ve tried to create an area that is a little more pleasant for drivers when they come in. There’s a place for them to wait, and they have their own washroom. They’re not crowded. Or stuck standing in a corner somewhere waiting. We’re trying to take a little bit of care of the drivers and give them a little comfort.”

Inside the facility, Nova Cold is making use of some automated technology to improve efficiency.

“We’ve got a Pallet Mole system from Frazier Racking. As far as I know, it’s the first in our region in the industry,” said Smith.

“It is a hydraulic cart which operates in the racking system. We have a 20-pallet-deep racking system, but we don’t have to drive down the 20 positions. There’s a hydraulic cart that picks the product up and brings it to the end. It gives us the ability to get some speed. While the fellow has gone out to the door to deliver the pallet, the mole has already gone back to get the next pallet to bring it into position so he can keep going.”

Even though the building just opened, Smith said there are already plans in place to evolve and grow the facility.

First, he’s going to qualify the building for Hazard Analysis Critical Control Point (HACCP) and CFIA Food Safety Enhancement Program (FSEP) certification. His other two facilities already have the designations, which is important, as the new location is a CFIA re-inspection facility, and because Nova Cold is approved under CFIA’s meat hygiene program, which Smith calls the agency’s “most developed standard” and allows the company to “handle pretty much any refrigerated or frozen foodstuff coming in through the area”.

As well, Smith said he intends to implement a WMS from Accellos, first in the new building and then throughout the entire company, starting some time in the next few months.

Nova Cold is also thinking about future growth. Smith says a second phase of construction is already being planned, and the goal is to add an extra 7,500 pallet positions in a building expansion.

“We’re starting to look at how we’re going to structure it, what type of business we’ll be targeting for it. It’s probably two to three years out before it will be in place,” he said.

As to why he built in the location he did, Smith said there are number of attractions, including CN rail car service, but the port’s prioritizing of food handling and the access it provides were its two biggest selling points.

“Halifax is looking to be a centre of excellence for frozen exports. So the focus the port has taken putting the plugs in for 1,000 reefers, gave me the impetus to say, ‘Yes, Halifax is committing, so I’ll take a step further too,'” he said.

Smith added that he’s looking for every possible way to expand the reach of the business, so membership in associations and being a part of a larger community are important.

“We’re part of the International Association of Refrigerated Warehouses (IARW) and on the transportation side we’re part of the International Refrigerated Transport Association. We’re a small company, so we need to try to make use of those links to make ourselves available to a broader client base. That’s part of what brought us to the Gateway Park. That connection to the Gateway and the support that could offer, as well as the freezer association and support that can offer and the connections beyond our market.”