by Inside Logistics Online Staff January 22, 2020 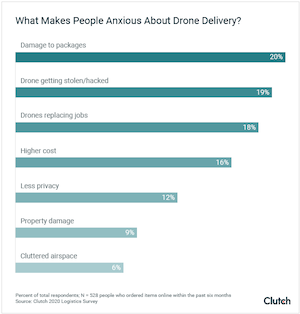 WASHINGTON – More than a third (36 percent) of online shoppers would be motivated to buy an item if they knew it would be delivered by drone. This is just one finding of a recent survey by B2B ratings and reviews platform Clutch.

Meanwhile, 39 percent of online shoppers say that a drone delivery option would not impact their purchasing decision, and 25 percent would be less likely to order an item delivered by drone.

Online shoppers said they are most excited about drone delivery’s potential of being faster (33 percent) and cheaper (21 percent) than other shipping methods.

Experts say neither of those options may be consistently true, though.

Millie Radovic, market analyst at Drone Industry Insights, a market research and analytics company, said that drone delivery will likely be a more expensive option until companies can scale their programs. Consumers may be willing to pay more for faster deliveries, however.

Whether drone delivery is faster than other shipping methods depends on many factors, though, including the location of warehouses, airspace restrictions, and weather.

“How do you incorporate a headwind?” Khasis said. “Is it going to reduce the possible efficiency [of the drone] by 40 to 50 percent on that specific date? Will you have to go back because it’s too windy, rainy, or snowy?”

Drone delivery will likely be more expensive than traditional shipping for now and may only be faster in certain environments.

Online shoppers are most anxious about drones damaging packages during delivery (20 percent), getting stolen or hacked (19 percent), or replacing jobs (18 percent).

Companies will continue to conduct extensive testing to minimize potential damage from drones. Package theft is an increasingly common issue for all delivery methods; scheduling drone delivery times or allowing for delivery to a consumer’s real-time location may minimize issues.