When fully operational in 2024, the new plants will manufacture Intel’s most advanced process technologies

September 28, 2021
by Inside Logistics Online Staff 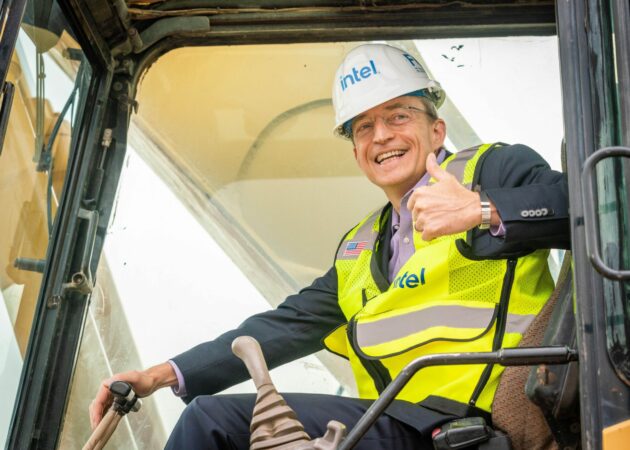 Intel CEO Pat Gelsinger signals to the crowd from earth-moving equipment in Chandler, Arizona, on Friday, Sept. 24, 2021, for a groundbreaking ceremony to celebrate the construction of two new computer chip factories.

September 28, 2021
by Inside Logistics Online Staff

With the addition of the two new factories – to be named Fab 52 and Fab 62 – Intel’s Ocotillo campus will house a total of six fabs. The new investment will create more than 3,000 high-tech jobs, 3,000 construction jobs, and support an estimated 15,000 additional indirect jobs in the local community.

When fully operational in 2024, the new fabs will manufacture Intel’s most advanced process technologies.

In an environment where global automotive and electronics supply chains have been disrupted by semiconductor shortages, Intel’s $20 billion investment in new manufacturing capacity represents a major re-shoring initiative.

“Companies benefit from a 25- to 50 percent cost advantage when establishing factories in Asia, primarily due to government incentives that have driven the current geographical imbalance. Without significantly incentivizing domestic investments in chip manufacturing, the U.S. and European semiconductor industrial base will continue to erode. How governments in the U.S. and Europe respond to the global chip shortage will determine their ability to be a global leader in technology and innovation.”

The United States has lost ground in semiconductor manufacturing and is at risk of falling farther behind. Intel is the only semiconductor manufacturer with leading-edge process and packaging research capabilities in the United States, and the company is investing in domestic capacity to support the surging worldwide demand for chips across multiple segments, from PCs to automobiles to the data centre and more.

The two new fabs in Arizona will not only support growing demand for Intel’s products, but will also provide committed capacity for the recently announced Intel Foundry Services (IFS).

“With Intel Foundry Services, Intel is opening its fab doors wide to serve the needs of foundry customers around the globe – many of whom are looking for more geographical balance in the semiconductor supply chain,” said  Thakur.

“We have plans for continued investments in the United States, but we can’t do it without government partnership to level the playing field. As Congress returns from recess, we urge both chambers to send a bipartisan bill to President Biden aimed at bolstering American competitiveness and investing in advanced semiconductor manufacturing and R&D.”