August 27, 2020
by Inside Logistics Online Staff

August 27, 2020
by Inside Logistics Online Staff 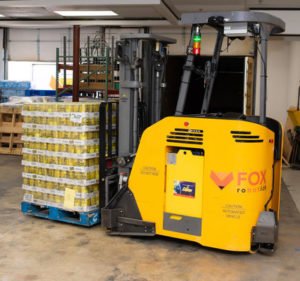 AUSTIN, Texas – Austin-based Fox Robotics has landed US$9 million in Series A funding to advance development of its self-driving forktrucks.

Fox makes self-driving forklifts that can unload trailers without modifying the warehouse environment. Fox’s forklifts can be installed and running in a new warehouse in less than a day.

“We are proud to back the team at Fox Robotics,” said Mark Siegel, partner at Menlo Ventures.

“The company’s value proposition is clear: Their full-stack solution for self-driving forklifts that can increase workplace productivity 200 to 300 percent. They bring huge efficiency to the supply chain.”

Fox’s flexibility comes from using technology similar to what is used in a self-driving car, customized for the warehouse environment. Fox’s forklifts use AI for real-time detection of pallets, trailers and obstacles and don’t need pre-programmed fixed locations. They use sensors and dynamic planning to plan routes on the fly and don’t require hand-drawn or memorized routes.

This investment lets Fox ramp up production to meet existing demand. Fox has been running pilots with large logistics companies since last October.