Since publishing our 2022 Micro-Fulfillment Center (MFC) report at the start of the year, there have been several external factors influencing the market, including a slowdown in e-commerce sales, the collapse of several rapid delivery grocers, and the negative impact of inflation on discretionary spending.

In this insight, we’ll be assessing the extent to which these factors will influence the automated MFC market and our short-term and long-term expectations.

As previously mentioned, despite many large companies expressing interest in deploying automated MFCs, we’ve yet to see any company implement a large-scale roll out. This comes as several automation vendors launch new technologies to service the market, such as Ocado’s Zoom offering and Noyes’s automated storage system targeting rapid delivery companies, leading many to believe this is a ‘technology push’, rather than a ‘market pull’, solution.

Furthermore, rapid delivery companies and MFC vendors alike have experienced hardships over the past six months. Fabric, for example, is laying off 40 percent of its staff and prioritizing its MFC product offerings, as opposed to its MFC-as-a-Service business. Several rapid delivery businesses have discontinued operations or left key markets such as Buyk and Jokr, respectively. Many of the remaining companies are shifting their business to a Software-as-a-Service platform as profits from delivering goods remain difficult to achieve.

Not all doom and gloom

While it’s certain that the industry is facing some external pressures, it may not be as bad as it seems. Firstly, while the growth of the online grocery market is slowing down, this comes off the back of an unprecedented period of growth during the pandemic. That the market hasn’t gone through a correction (i.e. decline) is testament to the shift in buying habits. What’s more, the market is still growing at a healthy pace, albeit slightly slower than last year.

According to Brick Meets Click, a research firm that tracks online grocery sales, the US e-grocery market grew by 16 percent in July 2022 YoY. Growth in online grocery sales has been the main catalyst for the roll out of automated MFCs. The wider slowdown in e-commerce sales would suggest that grocers are under less pressure to solve the problems associated from online grocery. However, as we can see, the market is still growing and the difficulties of fulfilling online grocery orders are as pressing as ever.

Another observation and potential key catalyst to the industry is Amazon’s commitment to micro-fulfillment as a strategy. According to a recent job posting, Amazon is looking to expand its ‘Amazon Robotics Micro-Fulfillment’ program. 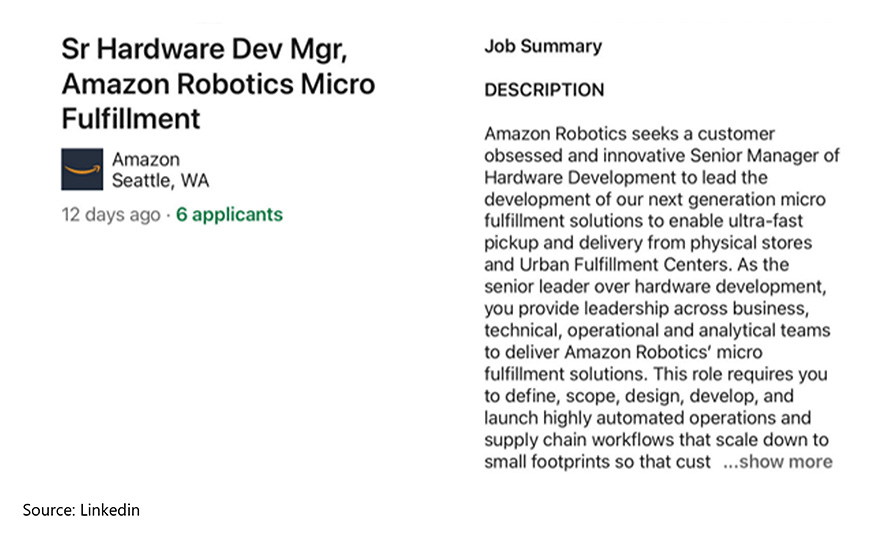 Amazon’s interest in automated MFCs was first reported in 2020 when the company submitted plans to the City of Los Angeles Planning Office for an alcohol license which included details of a Dematic automated MFC in the back room of its Woodland Hills store. However, neither Dematic nor Amazon commented on the story, and we’ve not heard anything since.

Since that story broke, Amazon has nearly doubled its fulfillment network, building expansive facilities which further pointed towards its lack of interest in automated MFCs. However, with the shift towards same-day delivery, decentralizing fulfillment may be the only way Amazon can fulfil online orders in in less than two hours. 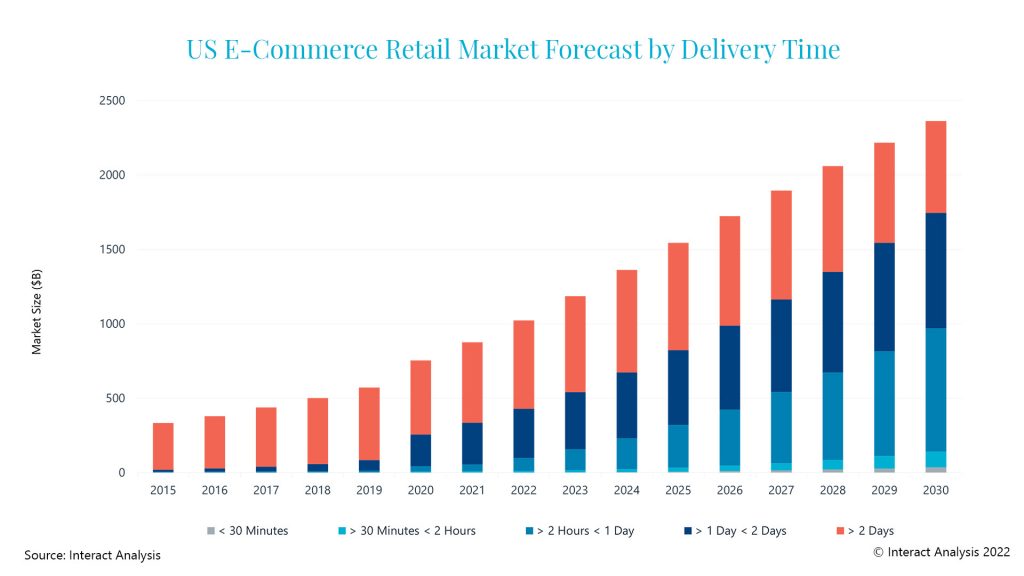 Our analysis of the US e-commerce market suggests that by 2030, 41 percent of e-commerce demand (in terms of revenue) will come from same-day delivered orders. In 2020, Amazon announced it would be building a network of 1,000 last mile warehouses, although these facilities are used to cross-dock items rather than store inventory. In order to achieve same-day delivery, Amazon will have to move inventory closer to the customer and automated MFCs may be the most economic solution for this.

To conclude, there are several forces at play that are negatively affecting the market. However, we believe that there are many drivers which are spoken about less. Namely, the positive growth of the online grocery market, despite the negative press, and Amazon’s push towards automated MFCs.

By 2030, our forecast suggests that there will be just under 7,500 automated MFCs in operation and we believe the structural drivers remain in place to support this assertion.

Rowan Stott is a research analyst at Interact Analysis.