As 4,000 grocery execs and suppliers came together at the Mandalay Bay hotel, the direction of the industry was discussed and future trends were shaped. The themes of the show were broad, ranging from social commerce and retail media to supply chain and robotics. We’ve written this insight to distill the main themes relating warehouse automation, summarizing the key trends whilst removing the noise.

Whilst several technologies were discussed at the conference, potentially more interesting were the technologies left out. Automated micro-fulfillment centers were hardly mentioned during the show. Whilst we’re bullish on the long-term potential of automated MFCs (for reasons we lay out here), we recognize that we’re currently in the bottom of the ‘hype cycle’ owing to some vendors over-promising and under-delivering.

Instead, utilizing existing store assets for manual in-store fulfillment was the talk of the town, especially as it pertains to small and medium sized grocers with smaller online volumes. Several in-store fulfillment software providers were exhibiting at the show including Upshop, Stor.ai, Wynshop, and Walmart Commerce Technologies. These solutions are used to orchestrate picking tasks within the store, ranging from route planning and batching, to substitution management and integration with downstream delivery services such as Instacart, Shipt, and UberEats.

In addition to a myriad of in-store picking software companies on display at GroceryShop, we saw a slew of hardware solutions aimed at increasing the efficiency of in-store picking. Front and center was Instacart’s ‘Connected Store’ offering; a suite of technologies aimed at grocers to help digitize both on and offline processes.

Carrot Tags form part of this suite; an electronic shelf label (ESL) solution that doubles up as a pick-to-light system. ESLs aren’t a new technology and questions over ROI have existed for many years. However, increasing the functionality of the tags to include pick-to-light capabilities will only improve the economics. That being said, whilst in-store pick-to-light systems using ESLs will certainly improve pick rates, it may prove challenging when multiple pickers (and potentially shoppers) are using the pick-to-light system in the same aisle. One attendee jokingly quipped that it would be like shopping at a disco with all the different lights flashing at the same time.

Another technology announced during GroceryShop was BrightDrop’s electrified cart (eCart) called the Trace Grocery. The Trace Grocery has several temperature controlled compartments used to store different orders (or parts of a single order) with Kroger reportedly being the first recipient of this technology. Using an electric motor, the eCart can be maneuvered around the shop-floor by the picker. Once the order is fulfilled, the eCart will then be loaded directly into the van, ready for delivery. Whilst the Trace is currently manual and requires an operator to ‘pull’ the eCart, we expect BrightDrop will introduce some degree of autonomy in the near-future. 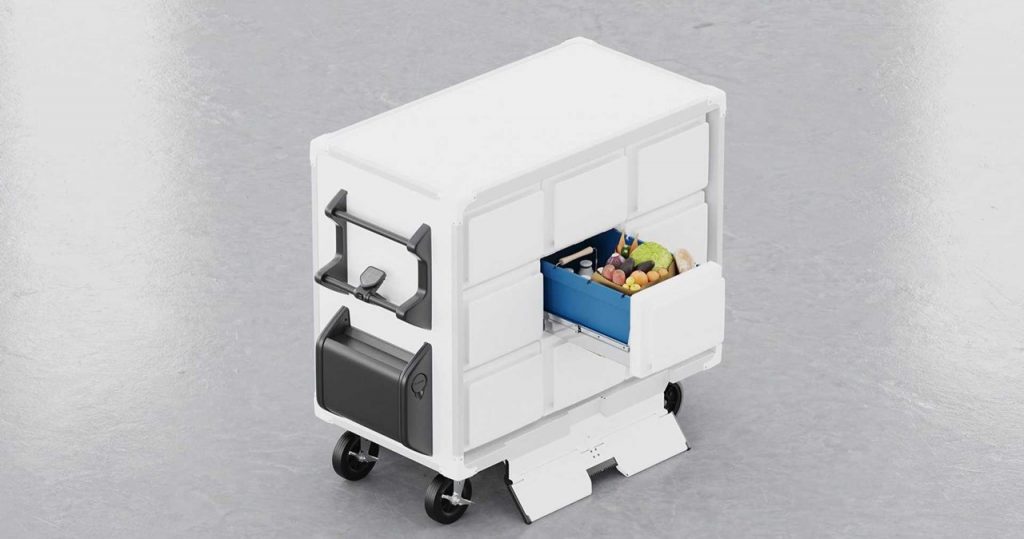 If the last two years has taught us anything, it’s that grocery fulfillment is challenging. Whether using manual in-store picking, or automated MFCs, order fulfillment is highly complex and often requires picking from multiple environments and delivering through multiple channels. It’s no surprise, therefore, that we’ve seen tech-savvy grocers look to license their fulfillment technology to smaller grocers.

Ocado was the first to license its technology which it calls the Ocado Smart Platform (OSP). Since then, Farmstead and Casino (in a JV with Ocado) have also been licensing their technologies to grocers to aid with the fulfillment process. Walmart is one the latest retailers to license its technology. Walmart Commerce Technologies, “a struggling start-up within Walmart” as Sunil Kumar, GM of the new business, jokingly described it at GroceryShop, is a subsidiary providing fulfillment technology to smaller grocers.

Many grocers will likely (and justifiably) express their concern about sharing sensitive and valuable customer with the likes of Walmart. However, to quote Oskar Hjertonsson from Cornershop during a talk at GroceryShop, the industry is going to get “weirder” with more unlikely partnerships between “Frenemies” expected to emerge over the coming years.

A Solution for Cold Chain?

Showcasing its actively-cooled thermoelectric totes in a VLM system, Phononic drew a lot of attention at the show. With energy prices soaring, chilling or freezing storage environments can be costly and unsustainable. Phononic’s approach is to cool and freeze the tote rather than the whole environment. From an automation standpoint, this means that you can store chilled, frozen, and ambient goods in the same storage system, avoiding the need for three separate environments. 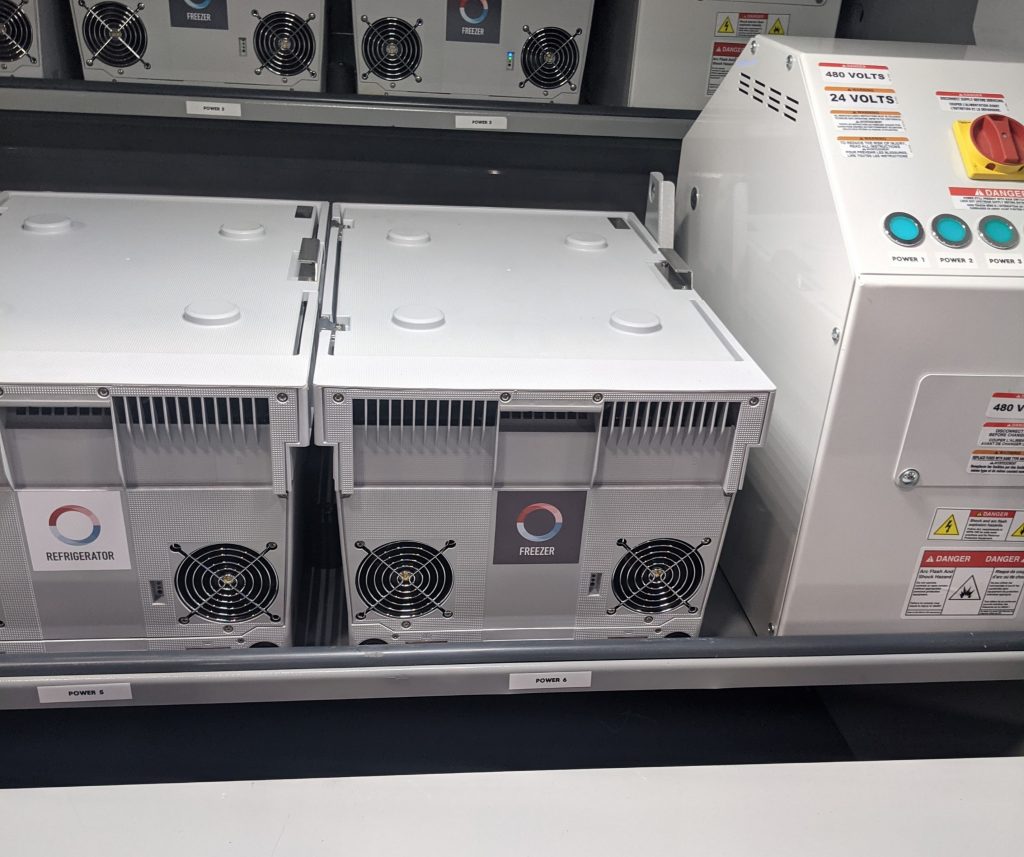 The solution extends beyond storage applications. At Delivery World earlier this month, Phononic showcased a temperature controlled electric delivery van. Cooling or freezing individual totes will be more environmentally friendly than cooling the entire cargo space of a van. For this reason, several retailers already chill or freeze individual totes when delivering online groceries, however, most are done via passive cooling using dry ice rather than an actively cooled solution.

There are still some questions which need answering. Most importantly: does the economics stack up? Does the cost savings of not having to use dry-ice for each delivery outweigh the high up-front cost of the totes? In addition, it’s unclear to us how these totes will be cleaned? Will they be able to go into an industrial cleaner given all of the electronics under the hood? Either way, the use of thermoelectric totes is a very interesting technology which has the potential to disrupt the cold chain industry if proven successful.

The monumental growth of rapid delivery companies in 2020 and 2021 took everyone by surprise. However, difficulties reaching profitability and regulations limiting the expansion of dark-stores led to an equally monumental fall.

Interestingly, however, the sentiment of rapid delivery services at GroceryShop was surprisingly positive. Whilst it’s unlikely that the rapid delivery segment will ever acquire a significant share of online sales, grocers were largely in agreement that it’s an important service nonetheless. Most agreed that a successful online grocery offering would involve various fulfillment options depending on the urgency of the order. Less urgent weekly shop orders could be delivered next-day at a lower cost, while urgent last minute orders could be delivered in less than 30 minutes, albeit with a bigger price tag.