The Southeast Asian economic powerhouse is driven by South Korea, Taiwan, Hong Kong, and Singapore. Behind these ‘Tiger’ economies, trot the ‘Tiger Cubs’ – Vietnam, Malaysia, Philippines, Thailand and Indonesia. The Tiger Cubs are so-called because they are following the same model of export-driven growth as their larger neighbours – and the world is beginning to take notice.

The International Monetary Fund has made post-Covid GDP growth projections for the Asian Tiger zone, and has pinpointed three of the cubs as having the healthiest prospects in the region, while other countries struggle. These are Malaysia, Indonesia, and Vietnam, who are all expected to see their overall economies expand next year compared with levels prior to the coronavirus outbreak in 2019.

Due to their export-led growth model, the Tiger Cubs are of particular interest to companies in the world’s industrial manufacturing supply chain. Manufacturing in all three countries has strong potential as a rival to China, partly due a lower cost base and partly due to rising international trade tensions causing globalized manufacturing firms to reduce their dependence on Chinese factories.

Malaysia: Food and beverage and semiconductors


With a nominal GDP of around US$452bn, Malaysia is the sixth largest ASEAN economy. The country’s strength is its industry production, with around 4% of production focused on machinery. The largest sectors are food and beverage, accounting for 22.5% of total output, semiconductors and electronic components (19.2%) chemicals and pharmaceuticals (10.1%) and electrical/electronic equipment and metals both accounting for just over 9% of total output.

Where food and beverage production are concerned, major players include Japanese drinks producer Suntory as well as domestic drinks producer A One Foods. Both are heavy investors in OEM machinery, and the leading global, Idaho-based semiconductor component manufacturer Micron, is set to open new state-of-the-art facilities in Penang in early 2021.

The value of machinery production in Malaysia in 2019 was $11.6bn. And the US Department of Commerce has identified Malaysia as having considerable potential for growth in this sector, notably for high value-added machinery such as specialized process machinery, metal working machinery and power generating machinery.

In terms of GDP (around $1.6T in 2019), Indonesia is the largest ASEAN economy. Like Malaysia, its main economic focus is industry production, though only 2.7% of production is focused on machinery (despite this, it is ranked 20th in the MIO for machinery production value, putting it above Malaysia which is 24th). Perhaps partly because it has a population of over 270 million to feed (the fourth largest in the world), food and beverage is by far the biggest production sector, accounting for 27.8% of total output. 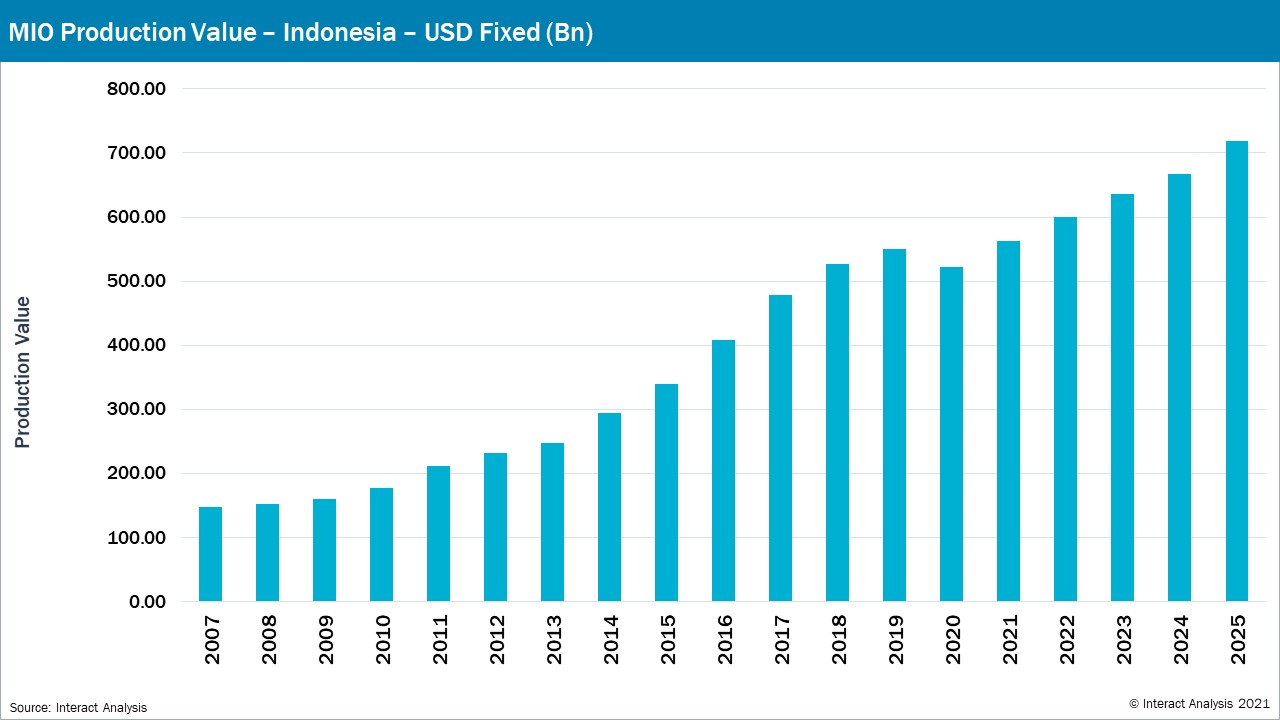 Textile production came in second (11.1%) and chemicals and pharmaceuticals third (10.1%). According to data from the IMF and PricewaterhouseCoopers, Indonesia is expected to become the world’s fourth largest economy by 2050, and the burgeoning food and beverage industry is expected to play a major part in realizing that ambition, with 49.1% of the population’s expenditure being food related. The textile and garment industry is also a sector of crucial importance to the Indonesian economy, given that much product goes to export. The industry lacks investment, however, and has been too dependent on manpower. Hence it was particularly badly hit during the pandemic, with widespread Covid outbreaks and factory closures.

The value of machinery production in Indonesia is $14.1bn, but its comparatively tiny share of overall industry production points to the fact that there is ground to make up. If the growing Indonesian economy sees increasing labour costs – as seems likely – then Indonesian machine builders may find that their domestic market, with its huge production sector, represents an immense opportunity. Additionally, COVID-19 led to 65% of textile workers being sent home temporarily, so if Indonesian manufacturers make efforts to ensure they are better positioned to keep operating during the next pandemic, this too will present a major opportunity for OEM machine builders and industrial automation companies more widely.

The IMF has given Indonesia a forecast CAGR of 6.4% in fixed terms, meaning it is the second fastest growing G20 economy behind China.

Vietnam: High tech is the motor of change


With a nominal GDP of around $465bn in 2019, Vietnam comes in as the third largest ASEAN economy. Like Indonesia and Malaysia, the country’s economic activity is centred mainly on industrial production, with two manufacturing sectors – electrical/electronic equipment and food and beverage accounting for 25.9% and 20.8% of output respectively.

Samsung Electronics is a giant on the industrial landscape, accounting for 28% of Vietnam’s GDP in 2019. There is a question here over the vulnerability of an economy where one company has such a large stake, particularly with the slow-down in demand for smartphones (smartphones and spare parts – most of which were produced by Samsung – accounted for exports worth a huge $58.3bn in 2019), but there are positive signs of diversification, with Google reportedly planning to manufacture its latest pixel phones in Vietnam.

Other global manufacturers are also moving into the region, with much of the new investment being in the manufacture of high-end technologies, such as Apple’s earphones and liquid crystal displays for Sharp. Hanoi wants the country’s production to move up the value chain, but there is a challenge that needs to be addressed – the shortage of skilled workers.

Machinery production currently accounts for a tiny 2.4% of total output, with the value being $10.5bn in 2019, but in terms of growth it is set to shadow industry production up to 2025, as indeed is predicted to happen in Malaysia and Indonesia as well. 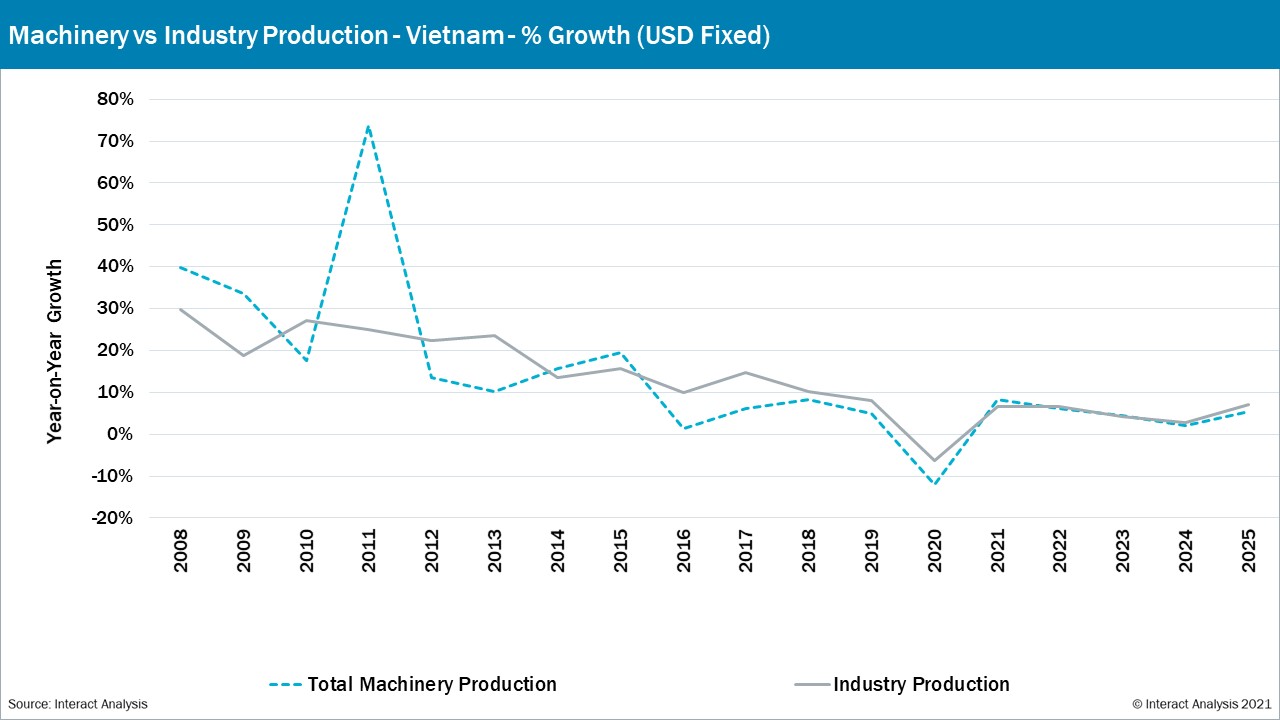 The World Bank has described Vietnam’s economic growth and resultant social transformation over the past 30 years as “remarkable”. Once a country fraught by poverty, it is now a burgeoning lower middle-income nation. The forecast CAGR for the period 2021 – 2025 is running at a healthy 5.1% in fixed terms.

Adrian Lloyd is CEO & Senior Research Director – US for Interact Analysis. He is a 20+ year veteran of technology research and has pioneered many data analysis techniques that are used widely by analysts today. He brings his expertise to many technology markets from industrial automation products to semiconductors.


This opinion was republished with permission. See more from Interact Analysis here.