While the acquisition itself and Shopify’s strategy with robotics is not so surprising, the $450m price paid for 6 River Systems – particularly as $270m of it will be paid in cash – may raise a few eyebrows. The price tag is 60 times multiple of 6 River Systems’ 2018 revenues, according to our estimates and nearly 20 times what we predict it will generate in 2019.

While this may on first appearance seem extraordinarily high, it should be noted that 6 River Systems’ revenues are set to grow at an exponential rate as it has attracted many customers in 2H 2018 and 2019, most of which are installing large numbers of its Chuck robots.

We estimate that 6 River Systems had around 15 customer sites at the end of 2018, but we expect this will reach 50-60 sites by the end of this year and will follow a similar growth trajectory in 2020. Shopify itself stated that it expects 6 River to add $30m in billings next year.

As well as the rapid increase in the number of customer sites, 6 River’s growth is compounded by three other important factors: firstly, the number of robots on average that each customer is going to install is increasing, and secondly the time from pilot to full deployment is shortening. The result is that we expect 6 River’s installed base of robots to grow from just a couple of hundred last year, to close to 1,400 this year. 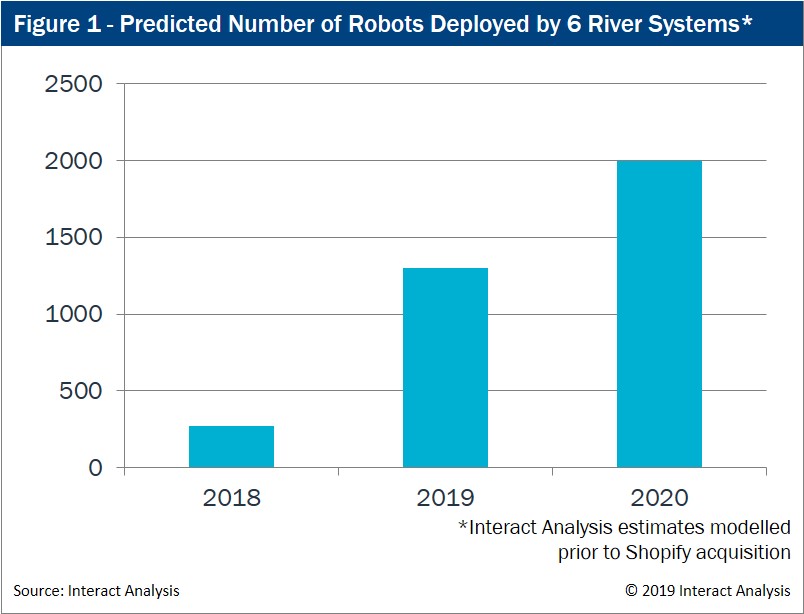 This rapid ramp rate was predicted in an earlier insight we wrote which shows the dramatic growth forecast for order fulfillment robots (6 River Systems products are classified as person-to-goods). Thirdly, 6 River Systems deploys a large proportion of its robots on a rental basis. This provides the benefit of more predictable revenues over multiple years, as well as a certain amount of customer ‘stickiness’. When considering all these factors, the valuation perhaps does not look so high after all. 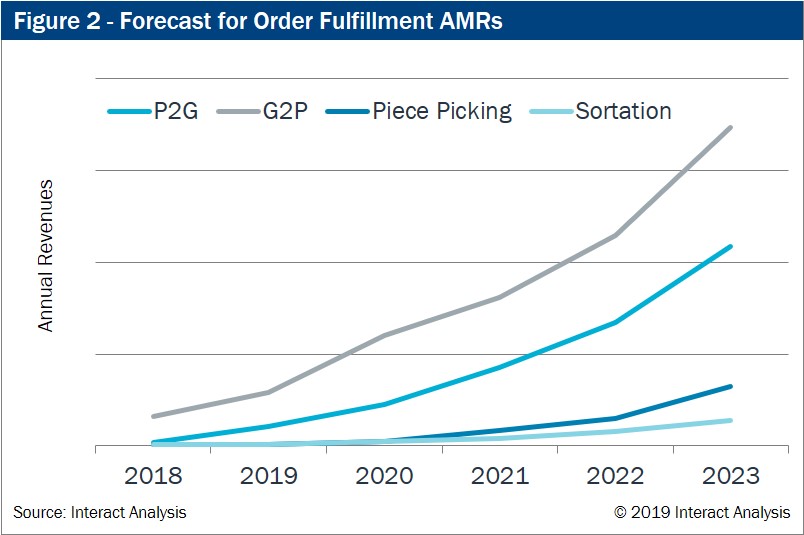 Shopify is best known as a global e-commerce platform provider, helping SME’s and larger enterprises to build an online e-commerce presence. However, in June, it announced it was launching its own fulfillment network, where it would manage and distribute its customers inventory, which will “…provide U.S. merchants with a network of distributed fulfillment centres, and use machine learning to ensure timely deliveries and lower shipping costs.” The acquisition of 6 River Systems fits well with this strategy as its robots will help Shopify’s partners to lower the operating cost of their fulfillment centres, reduce delivery times and costs and increase throughput.

In the near-term (at least not until 2021), Shopify intends to run its fulfillment network with a number of 3PL partners, rather than build and operate its own warehouses. In this approach it would provide the software, machine learning and analytics to optimize the network, as well as the deployment of the 6 River Systems robots. This strategy is likely to be very attractive to 3PLs which are struggling to compete with Amazon’s fulfillment; yet could raise red flags about Shopify’s intentions to become further vertically integrated in future by running its own warehouses and eliminating the need for 3PLs.

Furthermore, it’s not yet clear how existing 6 River Systems customers will be supported in future. It has several 3PLs and retailers as customers on multi-year contracts and whilst Shopify has stated that 6 River “will also continue to build and sell their solution for warehouses”, with Shopify spokesperson adding “It’s business as usual given the success of 6 Rivers Systems’ automation and current demand”, indicating that the robots will be available for customers outside of Shopify’s fulfillment network; concerns may be raised from customers over the longevity of the 6 River solution. Particularly those that have memories of Kiva customers who were abandoned and left with obsolete hardware once Amazon ended its support for them in order to maintain a competitive advantage.

The acquisition of 6 River Systems may surprise some – particularly given the early stage the company was at. However, we saw a similar picture with Canvas Technology being acquired earlier this year by Amazon when it had barely been commercially shipping a product. What this highlights is that the supplier landscape for logistics robots will continue to consolidate (and also attract investment) due the vast number of vendors active, the massive (and long-term) growth the industry is enjoying, and the rapid pace at which companies now need to act due to the speed of change driven by e-commerce and giants such as Amazon disrupting their industries.

This opinion was published with permission from Interact Analysis.