A sweet start to spring at the Port of Toronto

First ocean-going vessel to arrive in the Port of Toronto this year, the MV Federal Hudson carried sugar from Brazil

April 9, 2021
by Inside Logistics Online Staff

April 9, 2021
by Inside Logistics Online Staff 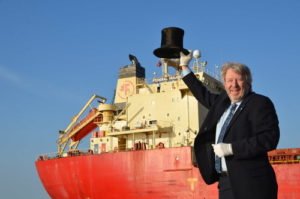 In a sure sign that spring is here, PortsToronto “crowned” captain Sumit Kumar of the MV Federal Hudson with an antique silk and beaver top hat at the annual Beaver Hat Ceremony.

The ship was the first ocean-going vessel to arrive in the Port of Toronto this year, travelling from Maceio, Brazil with 22,741 tonnes of sugar for the Redpath Refinery.

For the past 160 years, PortsToronto has celebrated the official opening of the commercial shipping season by crowning the captain of the first ocean-going vessel or “saltie” to arrive at the port.

Appropriate precautions were taken to ensure that this longstanding tradition could safely take place. Captain Kumar participated in the ceremony from the bridge of the MV Federal Hudson while PortsToronto manager of harbour operations, Michael Riehl, remained on the dock wall.

“The Beaver Hat Ceremony is a 160-year old tradition at the Port of Toronto, marking the annual opening of a vital marine gateway that provides Canadian and international businesses with a convenient, sustainable and cost-effective way to bring goods into the heart of the city,” said Geoffrey Wilson, CEI of PortsToronto.

“As we collectively inch toward normalcy following a difficult pandemic year in 2020, traditions such as these are a reminder of the longstanding resilience of our marine shipping industry, which has maintained the delivery of goods to many key sectors in the Greater Toronto Area and will continue to do so throughout the 2021 shipping season and beyond.”

In 2020, the Port of Toronto moved more than two million tonnes of bulk and general cargo products, which represents another strong year in marine imports for the city. Despite the challenges of the Covid-19 pandemic, in 2020 the port  experienced another strong year in steel imports, received the highest cement cargo levels in 16 years, and saw the return of short sea shipping – demonstrating the port’s position as a vital part of Toronto’s economic infrastructure and movement of goods.

The Port of Toronto’s first Harbour Master, Hugh Richardson, initiated the idea to entice ships to bring building materials into the harbour as early as possible each year, allowing Toronto – then a burgeoning city – to start its building season.

Originally begun as a celebration of the first ship to enter the harbour each year, the annual tradition now celebrates the arrival of the first ocean-going ship of the season, also known as a “saltie.” The annual ceremony also celebrates the commencement of the 2021 shipping season.