Port of LA bounces back

Container business in 2020 was "most erratic" ever seen, says executive director 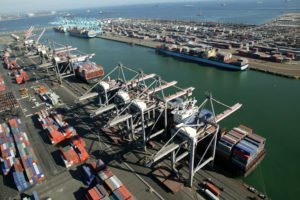 The busiest container port in the U.S. moved 9.2 million TEUs in 2020, the fourth highest number in the port’s history.

“Our container business in 2020 was the most erratic we have ever seen, with volumes plunging nearly 19 percent in the first five months of the year, followed by an unprecedented second-half surge,” Seroka said.

“Our ILWU longshore workforce did a great job adapting to the huge swings in volume, as did port truckers and everyone else involved in moving cargo through our Port. In a year of great difficulty, we are extremely grateful for the tenacity and resolve of all of our partners.”

The Port’s third- and fourth-quarter 2020 cargo volumes increased 50 percent over the first half of the year, with the Port handling a remarkable 94 percent more traffic the week before Christmas than the same week in 2019. The Port completed the year down approximately 1.5 percent compared to 2019 cargo volumes. 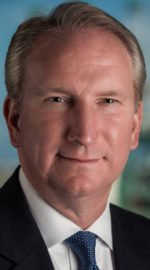 During a speech at the port’s annual reporting event, Seroka laid out priorities for 2021, including job creation, cargo growth, infrastructure investment, accelerating zero emission technology development and deployment, and continued development of a thriving waterfront community. He reiterated the port’s focus on supply chain efficiency and optimization, calling for nationwide port data connectivity that could provide enhanced visibility, efficiency and choice for cargo owners, as well as a more stable supply chain.

“If we want America to improve as a leader in global trade, we need nationwide port data connectivity with agreed-upon data standards and open architecture system that provides interconnectivity between major U.S. ports, service providers and the freight they move,” said Seroka.

In his call for further supply chain digitization, Seroka announced the development of The Control Tower, the newest in a series of Port Optimizer cloud-based data solutions. The Control Tower, developed in collaboration with Wabtec, will provide new metrics and data including real-time turn times, truck capacity management information and detailed velocity metrics.

The Control Tower will follow the Port’s introduction of The Signal in 2020, a data dashboard providing a three-week-in-advance look at cargo coming into the Port. Later in the year, the port introduced The Return Signal, another real-time data tool helping truckers know when and where to return empty containers to terminals. The Signal and Return Signal are both provided as services of the Port of Los Angeles.

Seroka noted several challenges faced by the port in 2020 amidst the pandemic, including drayage truck inefficiencies caused by container volume surges. Drayage trucks currently handle about three-quarters of all import and export containers moving through the port. In response, Seroka announced a new Truck Turn-Time and Dual-Transaction Incentive Program. Starting in February, the program will financially reward terminal operators who move containerized cargo faster and more efficiently through their terminals.

Seroka also highlighted several port achievements during 2020, including its leadership of Logistics Victory Los Angeles (LoVLA), which was formed to support procurement of Personal Protective Equipment (PPE) for the City’s stockpile and distribution to frontline workers during the COVID-19 health crisis. To date, the effort — led by Seroka as the City’s Chief Logistics Officer during this crisis — has provided more than 4.6 million units of PPE and other supplies to three dozen area hospitals and more than 150 skilled nursing facilities throughout the region.

Despite the pandemic, Seroka noted the progress on US$473 million in capital projects, which include eight major terminal, rail and roadway improvements. The port also moved forward on its goal of zero-emission terminal equipment by 2030 and a zero-emissions drayage fleet by 2035. It currently has 16 demonstration projects underway involving the testing of 134 pieces of advanced equipment, including 78 zero-emissions trucks.