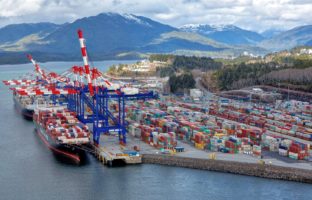 Despite the pandemic, 32.4 million tonnes of cargo moved through the Port of Prince Rupert in 2020, nine percent more than in 2019.

Exports of coal, propane, and wood pellets led the increase. Ridley Terminal saw a year-over-year increase of 26 percent, driven by demand for thermal coal. AltaGas’ Ridley Island Propane Export Terminal marked its first full year of operation in May 2020 and ended the year with 1,159,207 tonnes loaded onto 27 vessels bound for Asia. Pinnacle Renewable Energy’s Westview Terminal had a record year, exporting 1,474,301 tonnes of wood pellets, an increase of 33 percent over 2019.

Factory shutdowns in Asia and locked down economies in North America caused a 19 percent drop in container traffic in the second quarter.

However, volumes rebounded and DP World’s Fairview Container Terminal finished just six percent down with 1,141,390 TEUs moving through the port for the year. Smaller numbers of empty containers being shipped through Prince Rupert back to Asia accounted for the decline.

In spite of the pandemic construction continued in 2020 on projects to develop the port’s facilities. Construction crews are nearing completion of the Fairview-Ridley Connector Corridor, a five-kilometre private haul road that will reroute container trucks away from city streets and significantly reduce truck emissions. DP World gained regulatory approval for the southern expansion of Fairview Container Terminal that will support a future capacity of 1.8 million TEUs.

Vopak Pacific Canada is expected to make a final investment decision on a new liquid bulk storage facility and marine berth on Ridley Island later this year. As well, the environmental assessment process began for the proposed Ridley Island Export Logistics Platform, a project that will support large-scale export transloading.

“We continue to advance the development of critical infrastructure and expansion projects that support the resilience of the gateway operations, and the growth and diversification of cargo handling capabilities and capacities at the Port Prince Rupert,” said Shaun Stevenson, president and CEO of the port authority.

“By expanding trade enabling infrastructure, we will not only support our local economy, but will be poised to offer Canadian industries a competitive edge as the global economy rebounds from the effects of the pandemic.”