Five dockworkers strikes at the ports of Liverpool and Felixstowe in the UK have had serious impacts on inbound shipments to the UK.

New data released by Fourkites shows strikes at Liverpool that began on September 19th, October 11th, and October 24th of 2022 has an impact even before they happened, as the number of arriving containers plummeted in the week of September 11. 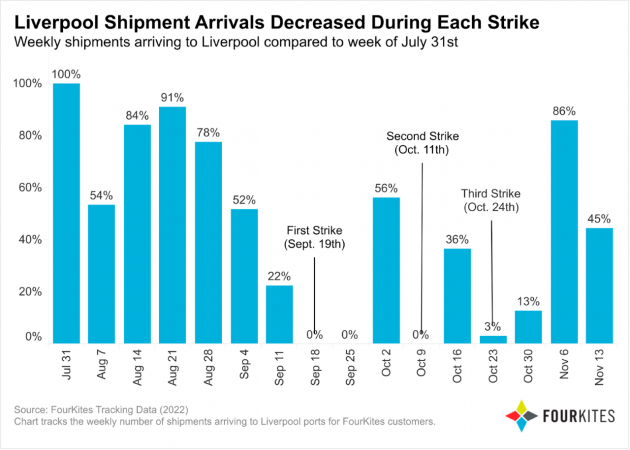 FourKites saw shipments arriving to Liverpool decrease by 58 percent week-over-week during the week of September 11th before the first strike began, an indicator that shippers were potentially avoiding the Port of Liverpool due to the impending strike action.

After the first strike began at the Port of Felixstowe, FourKites saw a significant increase in days spent at terminal for containers already at the facility.

On August 21st (the day the first strike began), ocean shipments (including import/export/transshipment) at the Port of Felixstowe had been at terminal for 5.5 days on average for FourKites customers. By August 30th, this had increased to a peak of 10.3 days on average, an 87 percent increase.

After the initial strike ended, average days at terminal at Felixstowe decreased to 3.8 days on average, though the onset of the second strike on September 27th caused this to increase again by 134 percent to 8.9 days as of October 10th.

Over this period, a collection of major European ports (including Rotterdam, Bremerhaven, Hamburg, and Antwerpen) has remained mostly stable, with the 7-day average days at terminal at 5.8 days as of October 17th.

During the initial Felixstowe strike, FourKites saw shipment arrivals to Felixstowe decrease from 20 percent of all U.K. port arrivals (during the week of August 7th) to zero percent. During this time period, it appears that many shipments may have been rerouted to other ports in the U.K. such as Southampton, which saw an increase from 13 percent to 25 percent over the same two-week period. 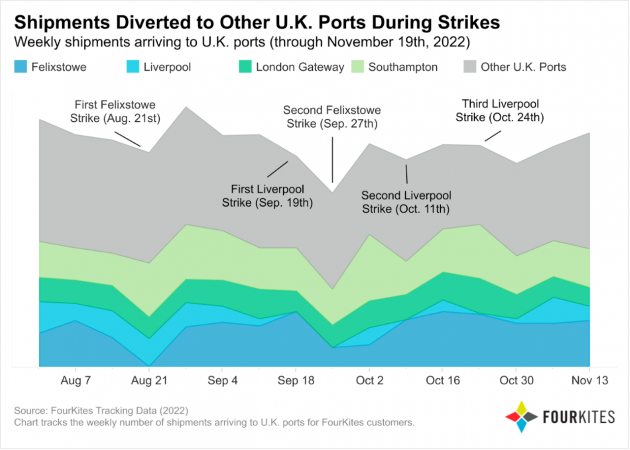 Felixstowe also saw a decrease in shipment arrivals as the second strike began, decreasing by 65 percent week-over-week. There are some signs that shipments were diverted to other ports such as London Gateway, too, as the share of shipment arrivals at London Gateway increased from 10 percent at the beginning of August to 13 percent during the week of September 27th, when both Felixstowe and Liverpool had ongoing port strikes at the same time.

For comparison, FourKites has consistently seen increased port congestion at ocean ports where worker strikes have occurred over the past few years. The average duration of ocean shipments increased by 15 to 50 percent at Melbourne, Sydney, Fremantle, and Montreal after workers’ strikes began.