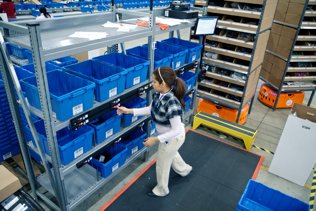 SEATTLE, Washington: The announcement that Amazon.com Inc signed a deal to purchase Kiva Systems Inc left at least one supply chain expert confused as to what benefit the online retailer could gain from the transaction.

“What they could be doing is gearing up an Amazon 3PL. Amazon has the universal, online fulfillment services company. Everything and everybody who is going to sell online should be using Amazon’s fulfillment capability.”

“It’s not like Amazon is GE Capital or Amazon Capital. It’s not that it’s a capital play and they’re a venture capital company that can put money into a company and at some point get a nice return. It’s hard to explain that from my perspective.”

He says Amazon is keeping its plans very close to the vest, making any sort of analysis of the deal difficult.

“There is no word whatsoever of the strategy. They say they’ll put the technology in the warehouse. This is ridiculous.

In the statement issued to announce the deal, Amazon seemed to imply it was buying the material handling company in order to have better access to the technology.

An Amazon.com spokesperson, Mary Osako, added that the company will continue to offer Kiva equipment to the market.

“Yes, Kiva customers will continue receive service and support after the transaction. And Kiva will continue to offer their technology to new customers.”

But Aimi isn’t convinced that will be the case.

“There was a rumour all along the way that Kiva was struggling to make ends meet. Great technology but it couldn’t really sell it at volume enough to keep it floating. So obviously the investor base—the guys who put the money in—were looking for an exit strategy,” he explained.

“There is a strategy in there somewhere that makes sense. At a bare minimum, Amazon could keep it afloat. The problem I have is if they bought it with the intention to sell at some point to someone else like SKI Logistics or Alvey. By buying it you take it off the market. In order to bolster it, you need to make sales and show it’s a top number one or number two provider in the marketplace. They don’t know how to sell material handling equipment.”

Even if Kiva products continue to be sold on the open market, Aimi can’t imagine customers, specifically Amazon’s competitors, flocking to make purchases.

“They wouldn’t want [Amazon] controlling something that is so fundamental to their operations. That’s just a risk.”

One reason might be to keep its competitors away from technology that plays a crucial role in Amazon’s operations. He said Amazon executives might be thinking: “‘I don’t want any of my competitors to gain access to this technology. And I think it’s that much of a revolution that I’m going to beat out every other online competitor who tries to be like me by taking this technology off the market.’ There’s a protectionism play, that kind of makes sense.”

The other strategy is the one that he figures is the most logical.

“What they could be doing is gearing up an Amazon 3PL. Amazon has the universal, online fulfillment services company. Everything and everybody who is going to sell online should be using Amazon’s fulfillment capability. They have the lowest cost-per-pick.

“That has some viability— that they are going to go out and rival UPS supply chain solutions as this mega e-commerce 3PL that has the system that will make that piece picking most profitable. There’s a strategy there.”