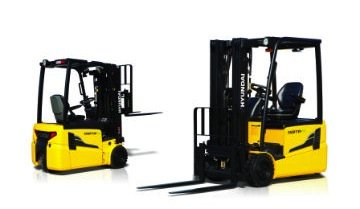 The BTR-9 forklifts come standard with a Zapi controller, a curve control feature which limits travel based on the turning radius, and an anti-rollback system to keep the forklift from sliding backwards on inclines. Operators are able to chose between four distinct performance modes: high, normal, economic and turtle.

Rear-wheel drive and centre pivot turning gives the BTR-9 forklifts a tight turning radius, making them suitable for use on loading docks, in distribution centres and in cold storage areas.

Safety features on the vehicles include wide visibility on all sides (due to an optimized lift cylinder arrangement), a panoramic backup mirror, a secondary horn button mounted to the hydraulic lift lever, and an overhead guard designed to exceed CEE and ANSI regulations. A down-control valve limits the fork lowering speed, and a down-safety valve prevents the forks from dropping down in case of sudden damage to the hydraulic line. An operator presence sensing system (OPSS) prevents functions such as lift lock, tilt lock and drive lock being engaged if an operator is not in the seat. The forklifts come with rear reflectors mounted on the counterweight, as well as halogen headlights and rear LED combination lights.