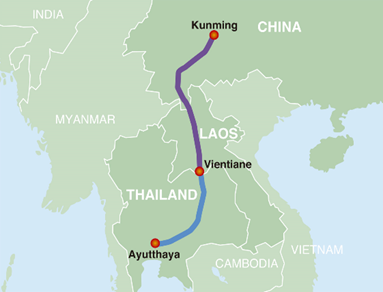 Cargo is moved by rail between Kunming, China and Vientiane, Laos and then by truck from Vientiane to Thailand and other neighboring ASEAN countries across the international border with Thailand’s Nong Khai Province. It takes five days to complete the trip between Kunming and Ayutthaya, Thailand.

The service reduces CO2 emissions by using rail transport and shortens lead time by half a day compared to conventional transport by cross-border trucks only. It serves as an alternative to ocean shipping.

Following the launch of the Nanning-Hanoi railway, the new China-Laos railway connecting Kunming and Vientiane was opened on December 3, 2021. Before the railways opened cross-border trucking was the only ground transport option connecting China and ASEAN.

The NX Group, formerly the Nippon Express Group which renamed its corporate group name following transition to a holding company system in January, 2022.