Company had planned to achieve goal by 2020 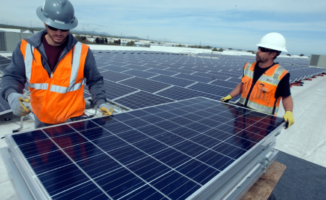 SEATTLE – Amazon has met its commitment to host 50 solar systems on its fulfillment and sortation centre rooftops globally by 2020.

Additionally, Amazon was ranked number one in the U.S. for the amount of corporate on-site solar installed in 2018 by the Solar Energy Industries Association (SEIA). The on-site solar systems reduce Amazon’s reliance on fossil fuels, and can generate as much as 80 percent of a single fulfillment facility’s annual energy needs.

Globally, Amazon has 32 rooftop systems in the U.S., 12 in the EU, and seven in India, totaling over 98 MW of installed capacity. In total, Amazon has 61 operating solar and wind projects that are expected to generate over 1,044 MW and deliver over 3.1 million MWh of energy annually.

According to the SEIA’s 2018 “Solar Means Business Report”, Amazon ranked first in the U.S. for the amount of corporate on-site solar installed in 2018, and second for total amount of solar installed to date. In total, Amazon’s solar projects in the U.S. have offset the CO2 equivalent of more than 200 million miles of truck deliveries.

“Corporate solar investments are surging thanks to companies like Amazon,” said Abigail Ross Hopper, president and CEO of the Solar Energy Industries Association. “Over the past three years, Amazon has installed more solar than any other company, showing that clean energy both boosts the bottom line and helps companies meet climate commitments. We commend Amazon for its leadership on solar energy and urge other businesses to follow their example.”