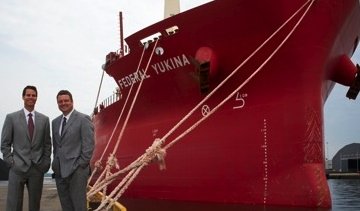 Hamilton: Montreal-based Fednav Group, which owns Federal Marine Terminals (FMT) at the Port of Hamilton, has invested in three new state-of-the-art vessels to trade on the Great Lakes-Seaway System.

The first ship, the MV Federal Yukina, arrived at Federal Marine Terminals, Hamilton, this week from Japan, carrying industrial slag, a material used in steel production. The vessel was delayed by the Japanese earthquake and tsunami. It will load cargo in Hamilton destined for Mobile, Alabama.

Privately owned Fednav Group is the largest ocean-going user of the St Lawrence Seaway, with an average of 100 trips each year.

“We’re increasing the capacity of our fleet in the Great Lakes as we believe there are opportunities in the region, and are very positive about the long-term significance of the St Lawrence Seaway,” said Paul Pathy, president and co-CEO of Fednav Group. “It remains the most economical and environmentally friendly way to move bulk cargo to and from the North American heartland.”

The Federal Yukina has been built with the latest technology, and Fednav Group said the vessel brings several environmental benefits:

The Federal Yukina, built in Japan in 2010, adds capacity to Fednav’s fleet of seaway-sized bulk carriers that regularly transport cargo from overseas such as steel and specialized cargo into the Great Lakes while shipping US and Canadian grain, along with other bulk material, to foreign markets. The second and third vessels of the series will arrive in the Great Lakes in 2012 and 2013, respectively.