MTO says carriers, not retailer, will be responsible for operation of extended semi-trailers 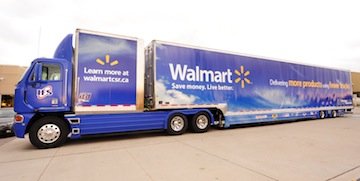 TORONTO, Ontario—The debut of Walmart Canada Corp’s supercube tractor trailer was met with a bit of confusion regarding who—the retailer or its carriers—would be given the permit by the Ontario Ministry of Transportation (MTO) to operate trial runs of the vehicles on the province’s highways. Now the government has clarified the the situation.

The MTO has issued revised its permit conditions. Under the new rules, the trial period will last for 18-months and five carriers will be qualified to operate four trailers each when shipping goods destined for the retail industry.

The vehicles in question have an extended trailer and shortened cab configuration. The split-level trailer measures 18.4m (60ft 6in) compared with a standard trailer which comes in at 16.2m (53ft). The truck portion has a drome box (short from dromedary), taking the place of a traditional sleeping quarters, designed to haul additional cargo and a cab-over-engine design. In total—tractor plus trailer—they are the same length as a traditional tractor trailer unit, but are said to have the capacity to hold approximately 40 percent more cargo. (For complete coverage from MM&D about the supercubes and the resulting controversy about who was award the permits to operate the trucks click here.

Other conditions include the following:

In addition to the above, the carriers are required to record and share data about each trip, including the date and time of departure, origin, destination, route and distance traveled. (To download the full list of requirements, click here.)

Although the Ontario Trucking Association’s primary objection was that Walmart, not the carriers, had been issued the permits, the association had other concerns as well. With the release of the final, revised regulations, however, it says many of its worries have been addressed.

“While for the most part the trucking industry would prefer to not have to deal with the whole question of extended length trailers, the association’s long-standing position is that it will not stand in the way of changes to Ontario’s truck weights and dimensions standards that would enhance the productivity of the industry, its customers or the provincial economy at large—so long as the proposed vehicles maintain or enhance highway/road safety; meet or exceed provincial dynamic performance standards; produce environmental benefits such as reduced GHG emissions; and allow for a sufficient return on investment,” says OTA president David Bradley. “In addition, OTA has also long held that only carriers with acceptable safety records—those who are prepared to ensure the safety of their fleets and their drivers—should have access to such special permits.”

All along, the OTA has said the trial phase and permanent licensing of these supercubes should be conducted in a similar manner as that put in place to introduce combination vehicles (LCVs) to Ontario’s roads: a multi-year gradual phase-in which gradually added operators and permits. And it seems the OTA got its wish, as the MTO has included the following in the permit conditions document: “Based on the results of the evaluation, MTO will determine whether to and how to proceed with a further measured roll-out of extended semi-trailer operations, which could include an increase in number of permits and/or carriers.”

Bradley, says this phrasing makes it “clear that what we are now talking about is a very small, tightly controlled trial of a specific trailer design, not a wide open roll-out of a new, longer trailer standard.”