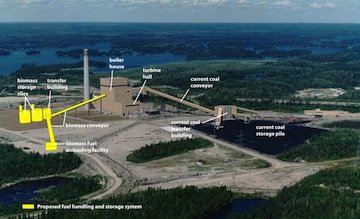 Some wood pellets from Rentech's Atikokan facility will power the nearby OPG plant. The remainder will move through the Port of Quebec for shipment to the UK (Photo: OPG)

LOS ANGELES, California—Quebec Stevedoring at the Port of Quebec plans to spend $20 million to build storage facilities and equipment designed to handle 75,000 tonnes of wood pellets for Rentech Inc.

The commitment is part of a long-term contract which will see Quebec Stevedoring provide terminal, warehousing and stevedoring services for the Los Angeles, California-based producer of wood chips, wood pellets and nitrogen fertilizers.

Rentech also signed a deal with CN to transport wood pellets from Wawa, Ontario and Atikokan, Ontario to the port. The company expects to lease more than 200 covered hopper rail cars from third parties to transport the pellets.

The deals are part of a larger, strategic move by Rentech that involves both the US$60 million purchase of Augusta, Georgia-based Fulghum Fibres Inc, a wood chip processor and the announcement of two ten-year supply agreements described by the company as “take-or-pay contracts”.

The first is with Drax Power Limited, which operates the coal-burning Drax Power Station located in Selby, North Yorkshire, UK. Drax is spending $1 billion to convert the plant to burn biomass and expects to need seven million tonnes of wood pellets to fuel the station by 2017. Rentech has a signed, ten-year contract to supply Drax with 400,000 tonnes of pellets annually.

The second deal is with Ontario Power Generation (OPG), the main producer of electricity in the province. OPG is phasing out the use of coal in its plants and has signed a ten-year agreement with Rentech for 45,000 tonnes of pellets annually with the option to increase that amount to 90,000 tonnes annually.

After being converted for the production of pellets, the Wawa facility is expected to product 360,000 metric tonnes annually, with the full output being delivered to Drax. The first shipment from this plant is scheduled for Q4 2014. The plant, which will employ 40 full-time workers, will require 710,000 tonnes of source material, which is wood fibre derived from timber harvested on Crown lands.

The Atikokan facility, which is located 18km from an OPG station, is expected to produce 125,000 tonnes of pellets annually, to be split between OPG—which will take 45,000 tonnes annually (with an option for 45,000 tonnes more)—and Drax. The first load from this facility is expected to ship in Q1 2014. Twenty-five full-time positions are expected to be created at Atikokan, and the plant will require 250,000 tonnes of source fibre. An agreement is in place between Rentech and Great North Bio Energy to work with local First Nations communities in the development and operation of the Atikokan project.

CWT Commodities USA, the Garden City, New York-based subsidiary of Singapore-headquartered CWT Commodities Pte Ltd, has been hired to provide logistics advisory services related to the shipment and handling of the pellets.