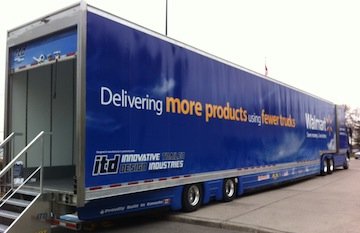 TORONTO, Ontario—The debut of a new supercube trailer design by Walmart Canada Corp was accompanied by a number of mixed emotions ranging from excitement to concern. It also came with a bit of ambiguity concerning some of the details about how the tractor trailers will find their way onto Ontario’s roads.

As reported earlier, Walmart officials said they have received permission from the provincial government’s ministry of transportation (MTO) to conduct a pilot project to test two tractors and four trailers to demonstrate the units are capable of being operated safely.

The announcement that Walmart would be responsible for the pilot caused the Ontario Trucking Association (OTA) to issue a notice citing concerns about this project. Among the OTA’s main objections was that the shipper would be responsible for conducting the pilot and for ensuring the safe operation of the trucks and trailers instead of the actual carrier—Interstate Freight Systems Inc (IFS)—and that by allowing this to happen the MTO was radically altering the trucking regulation landscape.

According to the MTO, however, that isn’t happening.

Bob Nichols, a spokesperson for the MTO, told MM&D this pilot will follow the tradition of past pilot projects, especially when it comes to who is responsible for the trucks and trailers.

“There is no change as to how these permits are being handled,” says Nichols. “The permits for this limited pilot will be issued to Walmart’s carrier and not to Walmart.”

Additionally, he says the carrier must have a good safety record.

“Carriers with ‘Conditional’ or ‘Unsatisfactory’ Carrier Safety Ratings may not qualify for permits. Carriers with such ratings must immediately cease operations.”

Nichols says that at this point in time, the trucks and trailers aren’t on the road, and they won’t be put into use until the details of the pilot have been finalized.

“The ministry is currently in the process of sorting out the details of how this very limited and controlled trial operation will take place. MTO is working with industry to finalize the conditions for trial operations, including how many carriers would be allowed to participate.”

In its statement, the OTA compared the supercube pilot to the pilot conducted to test the feasibility of long combination vehicles (LCVs), saying the multistage approach the MTO took with the LCVs was a good one and should serve as a model for the supercube trials.

Nichols says the differences between the LCVs and supercubes mean there will be differences in the pilot programs.

“LCV vehicle permits were developed in consideration of an increase in the overall vehicle combination length, which required engineering assessments of off ramps, driver rest areas and intersections along their proposed route.

“Apart from the length of the trailer, the overall combination length, height, width and weight of this proposed new tractor trailer combination are the same as a standard tractor-trailer (rather than an LCV) and the permit requirements for this pilot were developed accordingly.

“Wal-Mart developed a new design for a truck/trailer combination with increased storage capacity, without extending the total length of the combination. Wal-Mart’s concept resulted in a design that will improve cargo volume by 28 percent and the potential to reduce the overall number of truck trips on Ontario roads, relieving traffic congestion and keeping our air clean.

“This innovative new combination met the requirements of extensive dynamic performance testing that all other vehicles currently in regulation or under special permit are required to meet.”

Nichols adds the province is excited by the potential of the new trailers.

“The international trade corridor that runs from Montreal through Ontario to Detroit, Michigan is the most important on the continent. We will continue to look at ways to improve goods movement across the province, while keeping our roads the safest in North America.”