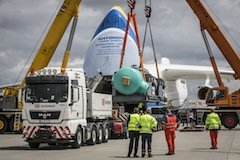 Schenker of Canada Limited’s Projects Division arranged for all segments of the delivery originating from Berlin, Germany including barge, truck, and final arrival at Edmonton International Airport via the Antonov AN-225. From there, the cargo will be carried by over-sized trailer to the Agrium Redwater plant.

According to Eric Dewey, president and CEO, Schenker of Canada Limited, “This is a massive undertaking that required months of extensive planning, right down to the final details. Agrium’s timeline negated the option of ocean transport and we were very fortunate the Antonov AN-225 was available to transport the waste heat boiler from Berlin to Edmonton.”

“We are undergoing a significant site construction and replacement project at our Redwater site,” explained Kevin Melnyk, plant manager Nitrogen Operations, Agrium Redwater. “DB Schenker knows we have a critical implementation timeline and they are working to specific deadlines to transport this waste heat boiler.”

“A critical role of EIA is efficiently supporting this type of heavy-lift cargo operation”, says Alex Lowe, manager cargo business development at EIA. “This operation is a prime example of the growth in cargo at EIA. Recent and continued investments in the airport’s cargo infrastructure will continue to enable this region’s economic growth.”

Originally designed to carry the Soviet Union’s space shuttle, the Antonov AN-225 is the only example of this Ukrainian aircraft ever built. The AN-225 is two-and-a-half times as long as a 737 and can lift more than the equivalent of three fully-loaded 737s or 45 African elephants or seven humpback whales in its cargo hold.